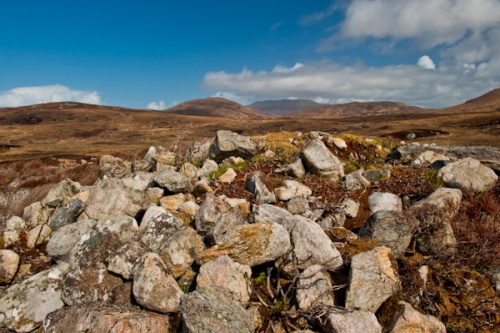 A good example of a Neolithic chambered cairn, though not so well preserved as the similar cairn just north at Reineval. The mound rises about 2.5 metres, above a base some 25 metres across. Several shieling huts were later built into the base of the cairn, making it rather difficult to make out the exact shape of the Neolithic mound.

From the top of the mound, you can see several of the large stones that supported the inner chamber, which is now collapsed. If anything, the location is even more scenic than nearby Reineval cairn.

Access to the cairn is straightforward, but you will definitely want good waterproof footwear. I wore rubber boots and was very glad I did!

Take the farm track immediately opposite the Frobost turnoff and follow it east for a mile, keeping the fence on your left. Where the fence ends, the cairn is slightly to your left about 50 metres ahead, across a boggy patch and a small stream.

Nearby accommodation is calculated 'as the crow flies' from Barp Frobost chambered cairn. 'Nearest' may involve a long drive up and down glens or, if you are near the coast, may include a ferry ride! Please check the property map to make sure the location is right for you.

The Luib Hotel is an ideal place to stay for travellers needing to relax conveniently situated midway between Killin & Crianlarich with its backdrop of magnificent mountain sceneery. The Luib … more >>