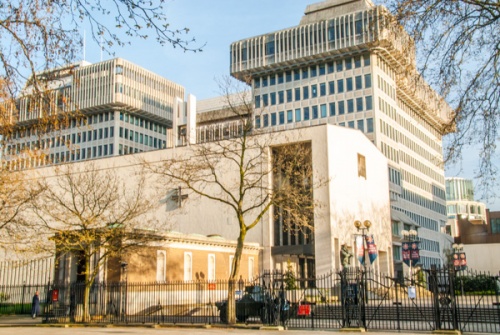 This museum, located in the historic Wellington Barracks, tells the story of the five regiments of Foot Guards (Coldstream, Scots, Grenadiers, Welsh, and Irish).

The museum was established as an educational tool for new Guardsmen; a way to help the new recruits understand the rich heritage of the regiment. That purpose explains why the museum is located at Wellington Barracks on Birdcage Walk, which is still used by the military. It was only later that the exhibits were opened to the general public.

The 5 regiments of Foot Guards combine with the Household Cavalry to guard the royal palaces and the monarch. That sounds like a purely ceremonial role, but in practice, the regiments serve in combat situations around the world, including recent conflict zones like Afghanistan. 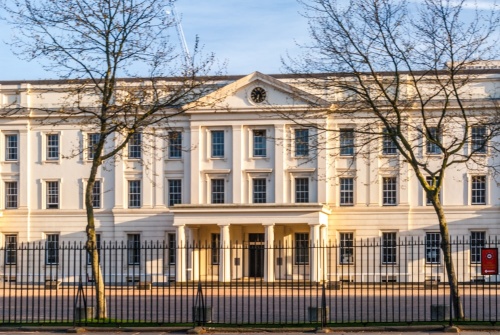 Museum exhibits cover the long history of the 5 regiments that make up the Foot Guards, from the Civil War to the present day. Visitors can see a large number of uniforms representing different time periods, along with a huge array of medals, sculptures, weapons, models, and paintings tracing the regiment's history and places around the globe where they saw service. Among the more unusual items is a display of Mess Silver.

Collection highlights include items belonging to the Duke of Wellington, Field Marshal Alexander, and 'The Grand Old Duke of York' (Prince Frederick, Duke of York and Albany).

Learn about the regiment's public duties in guarding the reigning monarch and the royal palaces, as well as the life of an ordinary soldier both at home and in service overseas.

Trace the history of the regiment through some of its major campaigns over the past several centuries, including the American Revolution, Peninsular War, the Battle of Waterloo, the Crimean War, and both World Wars.

Though you can tour the museum at your own pace, you can also opt for a guided tour and talk for groups, which lasts about 90 minutes. 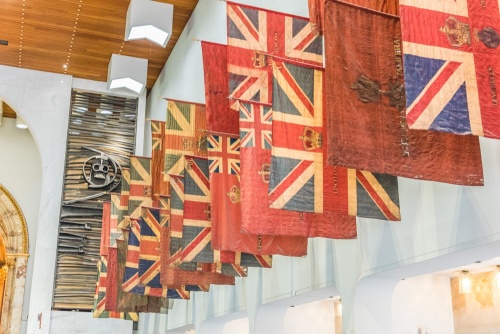 Regimental flags in the Guards Chapel

Immediately outside the museum, and also open to visitors, is the Guards Chapel, officially known as the Royal Military Chapel. The Chapel is the only Royal Military Chapel in London and was built in 1839 in the style of a Greek temple. It was heavily damaged by bombing raids during the 1940/41 Blitz.

It was restored, then hit again in 1944 when a V1 bomb exploded during a worship service, killing 121 people and wounded 141. In the devastation of the bombing, one remarkable story emerged; despite the destruction wrought by the bomb, the six silver candles on the high altar continued to burn. The candles have been kept burning ever since that time, without cease.

Once more the chapel was rebuilt, this time using memorials from the original chapel as foundations for the new building.

Beside the chapel stands Flanders Field Memorial Garden, a gift from the people of Belgium. The garden stands directly in front of the cloister where the names of all those Guardsmen who lost their lives in WWII are listed.

The raised flower bed is inscribed with the words of the poem 'In Flanders Field', by Lieutenant Colonel John McCrae. In front of the garden is a statue of Field Marshal The Earl Alexander of Tunis, arguably the most famous Guardsman of the 20th century.

Unfortunately, we were not allowed to take photographs inside the museum itself, which is a shame as there is so much to see. 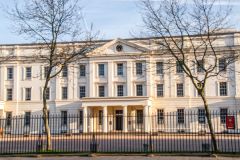 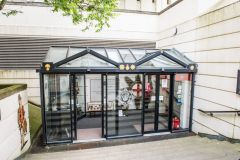 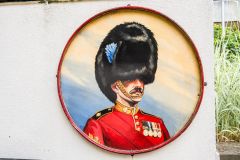 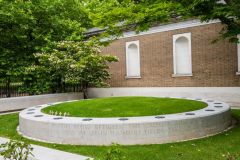 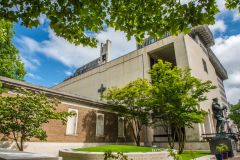 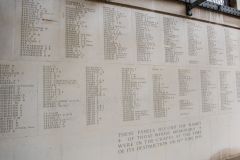 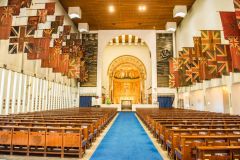 Note: You can get Free Entry to Guards Museum with the London Pass

More self catering near Guards Museum >>