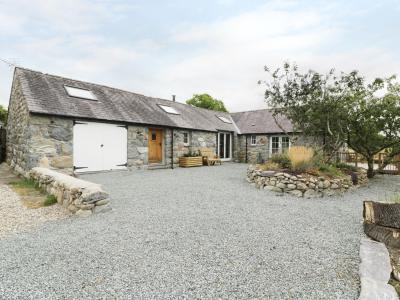 This converted farm building sits in the Gwynedd village of Groeslon and is able to sleep six people in three bedrooms.

Beudy'r Wennol is a restored farm building situated in North Wales, within the village of Groeslon. It provides three bedrooms, all of which boast king-size beds, one has an en-suite, there is also a family bathroom and a cloakroom, the property sleeps six people. Internally, also find a kitchen/diner, a utility and a sitting room with a woodburning stove.

To the outside there is off-road parking for two cars, an external games room, lockable storage and a garden with furniture. Beudy'r Wennol is a characterful barn conversion in a superb location for touring North Wales.

Never Again
My husband and I were fortunate to have a 4 day break at this holiday home with my sister in law and partner joining us the following day (14.09.20 to 18.09.20). Upon arrival, the barn seemed ok, quite impressive with the high ceilings. As the afternoon, evening wore on and we got settled and unpacked, we noticed that the cleanliness wasn?t as up to scratch as you would expect (especially in these very uncertain times), and other frustrating faults. This consisted of the following: Cobwebs down both sides of the wardrobe (as well as the back), there was no way that this wardrobe had been cleaned that day. Very large cobwebs in the kitchen and lounge area, again, having a supposed 6 hour Covid clean, you would certainly not expect this. Dirty cutlery in the drawer (which was the last straw for me personally). Toilets didn?t flush properly. You couldn?t use both showers at once, as the water flow was terrible. There was no kitchen roll, no washing up sponge (although there was a dishwasher). No hairdryer (I didn?t bring my own as the particulars stated that there was one). One of the shower rooms had no blinds on it and the house next door can see right in if they were standing outside. I had to shower in the dark. I text, who I thought was the owner but appeared to be the owners partner, firstly to ask where the hairdryer was kept and secondly, to say that we were disappointed regarding the cleanliness. About 20 minutes later, Angela knocked on the door with a carrier bag containing her own hairdryer (no explanation as to where the one was supposed to be). I didn?t know whether this has been cleaned prior to being brought up to us. She came in and we (tried) to explain to her about our concerns regarding cleanliness etc. Her initial reply was ?but look what you've got? gesturing to the home, not seeming too concerned about our uneasiness about the cleanliness. I assume she thought that we should be so amazed at our surroundings that the concerns we had would pale into insignificance. After showing her the wardrobe (after we had already cleaned most of the cobwebs off ourselves), her words were ?do you want me to bring you a feather duster?? At this point, I got slightly irritated. I work for the NHS and this was my first week off in 6 months so thought I had a right to be annoyed. Because of her attitude, we told her that we would be leaving the next morning and we also informed my sister in law that we were uneasy about the cleanliness and for her and her partner not to come as her partner has leukaemia. About 10 minutes after she left, the owner called up to look for himself. We explained about Angela's attitude and he apologised on her behalf. He could see our concerns that because the attention to detail was not there, we were in no way confident that it had been cleaned properly. About 10 minutes after the owner left, I received a text from Angela, apologising for her attitude and to say that there was a bottle of bubbly on it's way up to us and to please try to enjoy the rest of our evening. The owner then delivered the bottle of champagne and we again explained that if Angela had acted differently then we probably would have stayed if they had offered to get the cleaner in the next morning to rectify our concerns. We spent the rest of our evening trying to find another place to stay as we wanted to try and make the most of our break. The owner confirmed that my sister in law would receive a full refund. We thanked him and said we would be leaving asap the next morning. Since leaving the property, my sister in law has been told by Sykes that the owners are refusing to refund her, saying that it was because they offered for the cleaner to come and rectify things and we refused. This is an outright lie ? it was myself that said that if they had offered that, we may have stayed. Also since we left, Angela said that my husband was threatening and she was thinking of phoning the police! I can categorically say that my husband was in no way threatening towards her (in fact in was more the other way around). We were both a bit annoyed and upset but that's a totally different thing to being threatening. And, on another note, if we were that threatening, then why did she text me to apologise, send up a bottle of champagne and tell us to try and enjoy the rest of the evening?? The question of refund is currently ongoing as my sister in law has been speaking directly with Sykes. She has also spoken directly to Angela who appears to be inventing one lie after another. Further lies have surfaced, a couple of them being that I was confrontational and I could have easily have made up the story regarding the dirty cutlery! I find that absolutely abhorrent behaviour. Never have we been treated in this way before, and we are absolutely appauled by Angela's accusations towards us. We are disgusted by this behaviour and wondered why we couldn?t find many reviews for this place ? maybe this is why. I would not be in the least bit surprised if the owners ?lie? about my review. I can categorically say that everything I have stated is true. On another note, this review was sent to Sykes Holiday Cottages a few weeks ago and has still, to date, not been published on their website - I wonder why? We were so lucky to find an amazing home for the rest of our stay, which was spotlessly clean, had all of the facilities you could ask for, and amazing hosts.
lynneks
2020-10-29

Details
Underfloor heating throughout and woodburning stove
Electric Rangemaster stove, microwave, fridge/freezer, washing machine, dishwasher, TV with Freeview, WiFi, pool table, darts board
Fuel, power and starter pack for woodburning stove inc in rent
Bed linen and towels inc in rent
Off-road parking for two cars
Patio and garden with furniture
Sorry, no smoking and no pets
Beach 5 minutes away
Foot of Snowdonia and the Llyn Peninsula is 15 minutes away
Shop less than 2 miles, 1 x pub 5min walk and a 5 min drive for another
Note: One king-size bed is accessed from one side only
Note: No Hen or Stag parties allowed
Please note: This property has a £250 good house keeping bond
Please note check in is 4pm and check out is 10am

Get an Ordnance Survey map covering the Groeslon area.