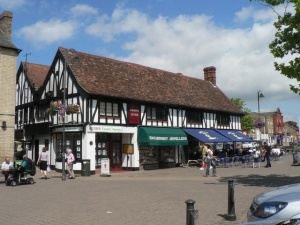 The market town of Biggleswade evolved as a ford across the River Ivel (the name means "Biccel's ford" in Saxon). Though there was a medieval castle here, nothing now remains of it but earthworks and crop marks.

The Market House was built in 1565 and saw use as an administrative centre for the weekly market. The building was remodelled extensively in the 20th century and is now home to several shops, but the original 16th-century roof has been preserved.

Cycling pioneer Dan Alborne is Biggleswade's most famous resident. Albone, working from a shop at #3 Market Square, invented both the lady's bicycle and the tandem. But he didn't stop at bicycles; Albone also invented the Ivel Agricultural Tractor, which became ubiquitous on farms across Britain.

During the early 19th century the town was a bustling inland port, connected to the sea by the Ivel Navigation (canal).

More self catering near Biggleswade

More bed and breakfasts near Biggleswade

Self Catering near Biggleswade