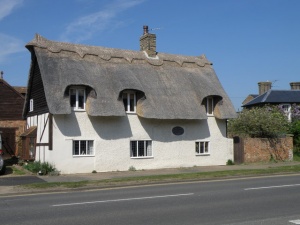 The small village of Blunham lies about 7 miles from Bedford. It is largely an agricultural centre, though well populated with commuters. There are several interesting older buildings, notably Manor House, and the village centre is designated for conservation.

The Saxons settled here as early as the 6th century. Today the only relic of those distant times is the Saxon font in the parish church.

At the time of the Doomsday Book, Blunham was jointly owned by Judith, niece of William the Conqueror, and the Abbot of Bury St Edmunds.

The church is unusually large, with a Norman door and arch dating to the 12th century. In the interior is a fine memorial brass for Sir Richard Manlaye.

Poet John Donne (of "no man is an island" fame) was rector of here from 1621 until his death in 1631. He was at that time also Dean of St. Paul's in London, and there is no record of how much time - if any - he actually spent at Blunham.

The village was for many years part of the Wrest Park estate owned by the de Grey family.

More self catering near Blunham

More bed and breakfasts near Blunham