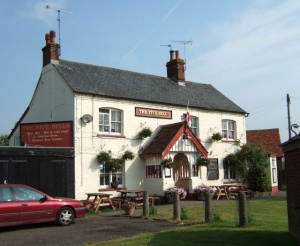 This village at the foot of the Dunstable Downs was once known as Eitone, or "Island Settlement", a reference to the streams that surround it.

After the Norman invasion, Eitone manor was given by William the Conqueror to his half-brother, Bishop Odo of Bayeux. Unfortunately, the two argued, William had Odo imprisoned and the manor reverted to the crown.

Eventually, the manor ended up in the hands of Sir William de Cantilupe, who began the fine church of St. Mary the Virgin. Cantilupe also built a moated castle here in 1221. Little remains of the castle beyond traces of the moat ditch and earthworks near Park Farm.

Eitone remained in the possession of Cantilupe's descendants until the Wars of the Roses when John de la Zouche had the misfortune to support the losing side at the Battle of Bosworth. Henry VII gave the manor to his own supporter, one Reginald Bray. It was Bray who is said to have placed Richard III's crown upon Henry's head after the battle.

Bray helped rebuild St. George's Chapel at Windsor Castle, but he was also responsible for expanding the church at Eitone, which henceforth became Eiton Bray, and later, Eaton Bray.

In the church is the tomb of Jane, Lady Bray, who married Reginald's nephew Edmund. Her funerary brass used to grace the tomb of an abbot or bishop, from whence it was taken during the Reformation. Lady Jane is portrayed in prayer with her son and ten daughters.

More self catering near Eaton Bray