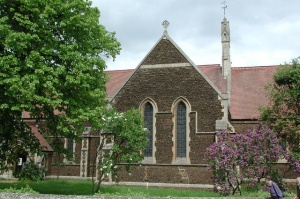 Lidlington is a small village overlooking the Vale of Marston. The Greensand Ridge at Lidlington is thought to have been the inspiration for the 'Delectable Mountains' in John Bunyan's classic, The Pilgrim's Progress. Bunyan is known to have visited the village, and it is thought that the steep slope of Lidlington High Street may be the model for his 'Hill of Difficulty'.

There was habitation here as early as the 3rd century, for a coin dating to AD 275 has been unearthed, and there is evidence of Saxon burials. The village of Lidlington first appears in the Domesday Book, when the name of the village was spelled 'Lilincletone'.

By the 13th century the manor was held by the Abbess of Barkway, but by the 19th century, it had become part of the Woburn Abbey estate, home of the Dukes of Bedford. In 1886 the Duke paid for a new church to built here when the old medieval church was in danger of collapse.

Flying Horse Farm was once a coaching inn, and the highwayman Dick Turpin is said to have stayed there.

In a field outside Lidlington is the Devil's Jumps, a solitary stone with a tale of devilment attached. According to local legend, a young man was indulging in boisterous play on the Sabbath, when the devil, seeing his chance, leapt on the lad's shoulders. The ground opened up at his feet and the young man and his comrades fell straight into Hell, whereupon the ground closed again, leaving only the stone.

A disused brickworks pit has been transformed into a lake which is popular for windsurfing, while another area of the old Lidlington Brick Works has been reclaimed as the Forest of Marston Vale, a nature reserve with woodlands and wetlands which are a delight for birdwatchers.

More self catering near Lidlington

More bed and breakfasts near Lidlington