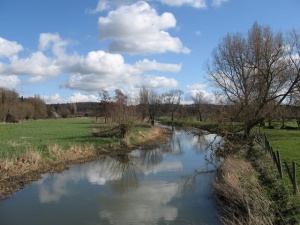 Sandy lies on the path of the old Great North Road between London and Edinburgh where it crosses the River Ivel. A hill fort, known as Caesar's Camp (though it predates the Roman period) looks down on the river. There was a Roman settlement here, and Roman artefacts are on display at the town council offices on Cambridge Road.

St. Swithun's church in Sandy is the burial place of Sir Frederick Liddell, whose sister Alice provided the inspiration for Lewis Carroll's Alice in Wonderland. The church also contains a memorial to Sir William Peel - one of those delightfully eccentric characters that England seems to produce regularly.

In 1857 Peel built his own railway between Sandy and Potton. But his memory is enhanced more by a famous episode during the Crimean War when he is alleged to have picked up a live shell fired by the Russians, and flung it back at them.

Sandy is the headquarters of the Royal Society for the Protection of Birds. The RSPB offices are in The Lodge, at Sandy Warren, surrounded by over 100 acres of woodland and formal gardens criss-crossed with nature trails and spotted with hides for observing birds and wildlife.

Near the village is Hassells Hall, a late Tudor house, now converted to flats. The Hall is the ancestral home of the Pym family.

The Greensand Ridge Way long distance path runs through Sandy on its way from Leighton Buzzard to Gamlingay. Another path, the Kingfisher Way, follows the banks of the River Ivel through lovely countryside to Tempsford, where the river joins the Great Ouse.

More self catering near Sandy

More bed and breakfasts near Sandy