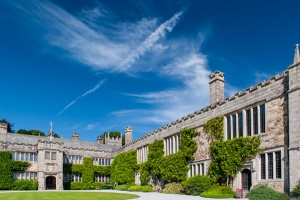 Lanhydrock is unquestionably one of the most impressive (and popular) historic houses in Cornwall. Built of local grey slate and granite around an inner courtyard, the house dates to 1640, though most of the current building was the result of rebuilding after a fire in 1881. Survivors from the earlier house are the impressive gatehouse, the 2-story porch, and north range, with a 116-foot long gallery.

Robartes came from a family of wealthy tin traders from Truro, and it is said that he gained his peerage by the expedient means of giving the Duke of Buckingham, James I's favourite, a sum of 10,000 pounds.

The 2nd Lord Robartes completed the house just before the outbreak of the Civil War. He fought for Parliament in the Civil War, and Lanhydrock was used by the Parliamentarian general, the Earl of Essex, as his command post.

Royalist soldiers under Sir Richard Grenville captured the house, and Lord Robartes escaped by sea, leaving behind his children as captives. The house was forfeited to the crown and granted by Charles I to Sir Richard.

Lord Robartes regained the house after the king's execution, but he retired from public life, objecting to Cromwell's policy of making the Church answer to the State. It was while he was in retirement that Lord Robartes completed the wonderfully ornate gatehouse through which visitors approach the house today. 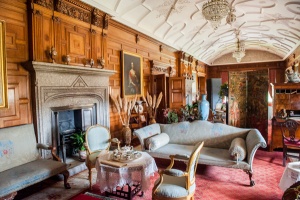 He re-entered public life in the Restoration and rose to become Lord Privy Seal. The Robartes peerage died out with the 4th Earl and passed through the female line to a distant relative called Thomas Agar. Just to confuse matters, Agar took on the Robartes name, and in 1869 became the 1st Lord Robartes of the second creation (or, if you want to really be confusing, call him the second 1st Lord Robartes!).

This 1st Lord Robartes and his wife Juliana laid out the wonderful gardens that are one of the most appealing features of Lanhydrock today. They extended the house, but in 1881 a devastating fire left much of the interior gutted. Lady Robartes herself had to be rescued from an upstairs window to escape the blaze. She died shortly after, and her husband followed less than a year later.

Their son, known as 'The Little Lord' for his small size, rebuilt the house, but rather than recapture the feel of the original Jacobean interiors he created a very subdued Victorian mock-Jacobean style. He also used steel and concrete throughout, to make the new version of the house as fireproof as possible.

He installed modern conveniences, including electric lights, a cooling system, and central heating, and even inserted heated cabinets to keep food hot on its long journey from the kitchens to the family's table.

Within the gallery is a superb 17th-century plasterwork ceiling, illustrating scenes from the Old Testament mixed with depictions of unusual beasts. 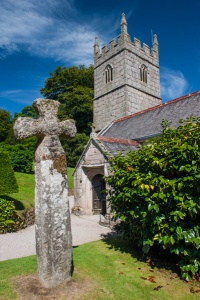 The house is huge, and fully 50 rooms are open to visitors. The National Trust has recreated the atmosphere of an Edwardian country house at Lanhydrock, and the restored kitchen and servant's quarters make a distinctive contrast with the glittering family rooms. A further contrast is provided by the children's nursery rooms.

Immediately behind the house is the 15th-century church of St Hydroc, where many of the Robartes family lie buried. Outside the south porch stands a pre-Norman Celtic cross, made of granite, with finely carved plaitwork panels and a reworked cross-head.

The oldest memorial inside the church is that of George Carminow (1599) and his wife Jane, while in the north aisle is a marble monument to Lady Essex Speccot (d. 1689).

One of the most intriguing historical features inside the church is a carved and painted heraldic crest of the Carminow family. The family crest contains a motto in Cornish; the oldest example of a Cornish motto (most are in Latin or Norman French). The motto 'Cala Rag Whethlow' was adopted around 1390 after a Carminow lost a case concerning his right to use the device of a blue shield with a gold band across it.

Lanhydrock is surrounded by 900 acres of parkland and woods, allowing enjoyable walks on a network of footpaths. Closer to the house you find a mix of formal Victorian parterres and a lovely slope of magnolias, rhododendrons, and camellias leading to the verge of the woodland. At the top of the garden is a small holy well, sheltered by a mid-19th-century wellhead. A stately avenue of beech and sycamore leads from the gatehouse to the nearby bridge across the Fowey. 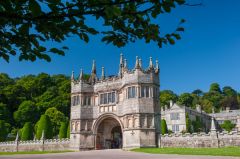 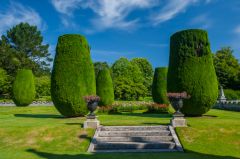 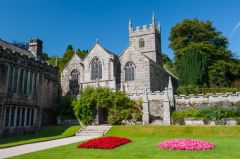 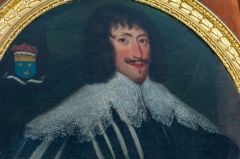 More self catering near Lanhydrock

More bed and breakfasts near Lanhydrock