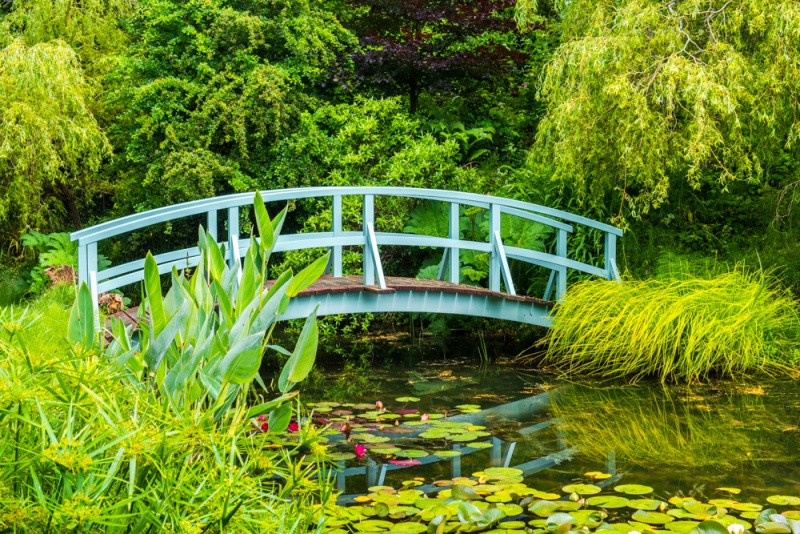 Bennett's Water Gardens were founded in 1959 in a former clay pit once used by a brickworks. Here Norman Bennett carefully planted a collection of water lilies that has become one of the finest in the world. The site stretches to 8 acres of landscaped paths skirting peaceful lakes and are at their best in the summer months. In addition to lilies, there are a wide variety of pond and moisture-loving plants on display and the garden is a haven for pond life.

A small museum traces the history of the village and the brickworks and explores the transformation of the pits into the lovely garden we can see today. Bennetts, which is still run by the Bennett family, is the home of the National Water Lily Collection. 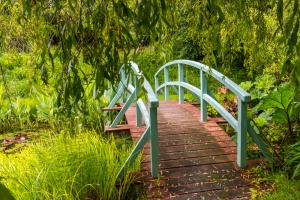 Walking over the Monet Bridge

The Bennett's site was owned by Putton Brickworks during the 18th and 19th centuries. The brick-workers excavated clay to a depth of 15m, and the deeper they dug the more water began to fill the pits.

The brickworks had to keep pumping out the quarries to continue excavating clay, but when Putton closed down in the 1950s the pits filled in, creating a series of ponds. Norman Bennett used the ponds to grow water lilies for his pond plant business. Mr Bennett obtained lily plants from the same French nursery that painter Claude Monet used to create his garden in Giverny.

The ponds served to grow water-lilies for the next 30 years, and Bennett lilies were exported across the globe. While the ponds served a very practical purpose, Mr Bennett's son Jonathan, who took over the family business, decided that they might as well be the centrepiece of a beautiful garden as well.

He landscaped the old clay pits, built pathways, and added garden features like bridges and gazebos. In 1990 the gardens were named a Site of Special Scientific Interest (SSSI) and in 1993 Bennetts became an accredited National Plant Collection centre. They now host over 140 hardy cultivars from around the world.

The centrepiece of the garden is the Monet Bridge, a copy of the bridge painted by Claude Monet in his masterpiece 'The Water Lily Pond', painted in 1899. The bridge stands at one end of The Cutting, the route created by a railway which carried clay from the quarry to the old brickworks that stood north of the garden site. The bridge was created in 1999 to mark the centenary of Monet's painting.

The garden is built in and around 10 ponds. The largest and deepest is Roach Pond, which runs through several lakes before emptying into Weymouth harbour. The second-largest pond is Orfe Pond, where Appleyard ducks can be seen around the Imperial Gazebo, a viewing house in Oriental style.

The white Pond is home to the European White Water-lily; the only native British water-lily. You will see more white water-lilies in the Elodea Pond, where lovely Sitka Spruce, Scots Pine, and Monterey Pine stand near the shore.

A lovely touch is the Woodland Walk, a shaded trail which follows the edge of the original clay pits. And if you want some variety after the lily ponds you will enjoy the Tropical House, a glasshouse acting as home to warm-climate plants.

Everywhere you look are interesting plants and wildlife. The ponds are alive with stickleback, roach, and carp, and birds from grey herons to the elusive kingfisher can be found by the pond banks. Other frequent feathered visitors include cormorants and egrets. Foxes, badgers, roe deer and rabbits are often seen.

The garden is extremely well-signed from major roads around Weymouth. In fact, I'd say Bennett's is one of the easiest visitor attractions in Dorset to find, based on the useful signs. I came on a dull June day, after a rain shower, and found myself alone in gardens.

It was an absolute delight to wander amid the ponds. There are several small Oriental footbridges and carefully arranged gazebos to act as focal points, and everywhere you look are lilies. I highly recommend good waterproof footwear, for though there are good trails, they were soft and wet after the rain. 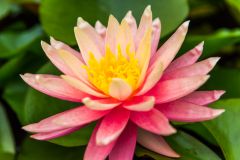 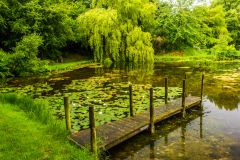 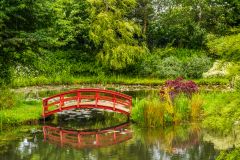 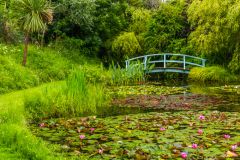 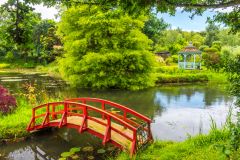 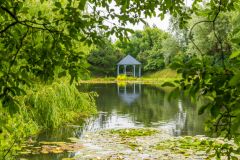