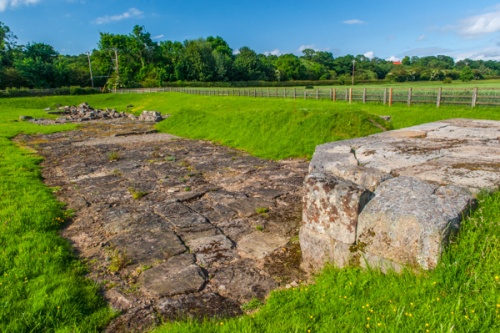 There are two Roman sites at Piercebridge, on opposite sides of the River Tees. On the south bank, to the east of the B6275, are the remains of a 2nd or 3rd century AD bridge over the Tees, associated with the Roman fort on the north bank, to the west of the road. The fort was located beside the major Roman road known as Dere Street, which linked York to Hadrian's Wall at Corbridge.

A civilian settlement, or vicus, grew up around the fort, with dwellings on both sides of the river, and the bridge helped join these two parts of the settlement. Excavations on the site of the fort have revealed foundations of buildings including a bathhouse and soldier's barracks. Only the bridge is an 'official' English Heritage site, but enough of the fort has now been uncovered to make it equally interesting.

The first bridge across the Tees here was wooden, built around AD 90, but sometime in the late 2nd century, the wooden structure was washed away as the river changed course. Estimates of exactly when this happened range from AD 130-180. Remains of bridge timbers have been discovered under the water.

A second bridge was constructed 200 yards downstream from the original bridge. The main bridge structure was again of timber, but this time the timber was supported by stone abutments and a series of five thick masonry piers. The builders also laid down a series of paving blocks in the river bed to prevent the river from damaging the piers.

Over time the river continued to change course, moving gradually northward. The southernmost abutment silted up in the 4th century, so the Romans built a metalled causeway leading to the bridge, protected by a retaining wall of limestone blocks. 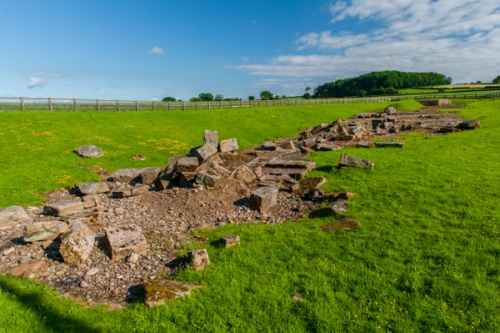 Remains of the Roman causeway

The southern bridge abutment has been excavated, along with sections the causeway, the piers that supported the bridge, and the paving stones in the river used to protect the piers. No trace of the matching north abutment has been found, suggesting that it was destroyed by the force of the river over time.

The south abutment stands 4 feet high and has five holes in the side facing the river where timber bridge beams were inserted. Tradition suggests that this second bridge across the Tees was in use until about 1500, but there is no historical proof to verify this late date.

Piercebridge Roman Bridge is in the care of English Heritage, but the site is open to view and can be accessed at any time. The nearby Roman fort and civilian settlement have been partly excavated and some partial remains can be seen - though much has to be guessed at! 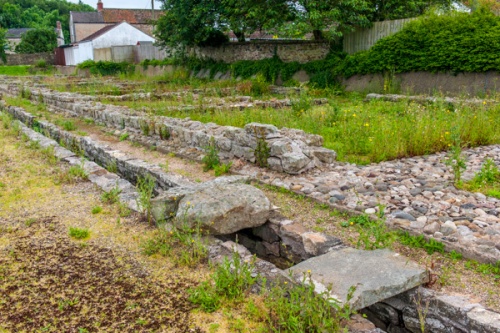 The name given to the Romans for the Piercebridge fort is not known; it may have been Morbium, or Magis. Interestingly, excavations of the fort suggest a date of around AD 270, well after the construction of the bridge and much later than remains found in the civilian settlement, the vicus.

How could this be? Civilian settlements grew up around forts, not vice versa! This anomaly has led historians to suggest that there must be a much earlier Roman fort somewhere on the site, contemporary with the bridge. This would make much more sense, but as yet no trace of such an early fort has been found. 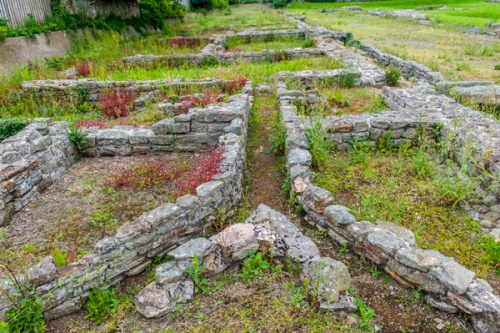 The fort at Piercebridge was quite a large one, at over 11 acres. It stands about 200 yards west of Dere Street, with the vicus lying between the fort and the road. Remains have been found of Flavian era pottery (AD 69-96), but the only remains of buildings date to the late 3rd or early 4th century.

The site was surrounded by a defensive ditch and accessed through a double-portal gate (two lanes). A bathhouse was found in the south-east corner of the fort, with a hot chamber and a cold plunge pool. Partial remains of other buildings, including a possible granary, have been excavated, separated by cobbled streets. A culvert and latrines have been unearthed, and very scanty remains of a nearby aqueduct that served the fort.

The vicus associated with the fort was quite large, covering at least 11 acres. Up to 30 buildings have been identified, but only small sections of the settlement have been excavated. These excavations revealed two buildings, one of which contained an altar. Hypocausts (underfloor heating tubes) were found, as well as workshops with kilns and detritus from working bronze. Just outside the vicus a small 7th or 8th-century silver coin known as a sceat was found.

Note: If you live in the UK you may remember Piercebridge from an episode of the popular TV series Time Team (series 17, episode 3).

The Roman bridge is easier to find; there is a parking area beside the George Hotel on the south bank of the River Tees, also on the B6275. From the parking area a footpath leads beside the river to the bridge site, a walk of no more than 5 minutes. 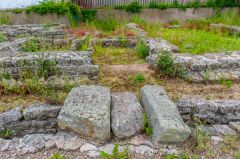 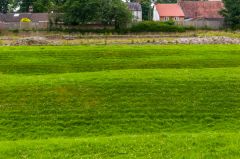 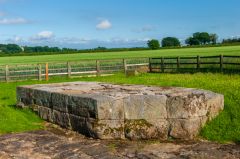 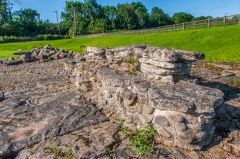 More self catering near Piercebridge Roman Fort and Bridge

More bed and breakfasts near Piercebridge Roman Fort and Bridge