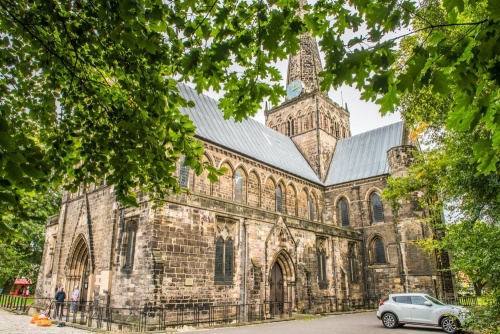 The ancient church of St Cuthbert stands on the historic market place in the centre of Darlington. This elegant 12th-century church is known as the 'Lady of the North' and boasts a wealth of medieval furnishings and even earlier Saxon carved stones.

The story of St Cuthbert's Church goes back to AD 995 when monks carrying St Cuthbert's remains from Ripon to Durham rested here. 169 years later in 1164 Bishop Hugh de Puiset of Durham built a palace on the site of the present town hall. Sixteen years later in 1180 Bishop Puiset began building a new church dedicated to St Cuthbert on the edge of the town's market place.

The body of the church was finished by the middle of the 13th century, though the spire was not added until the 14th century when the aisle roofs were raised. Most of the building we see today dates to the early 13th century. 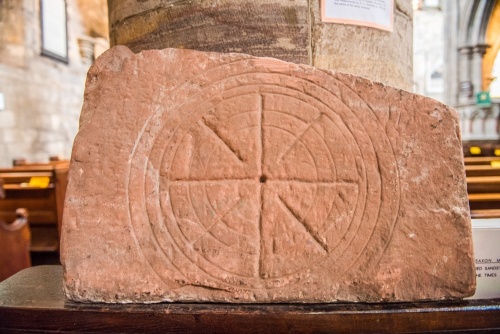 The church is laid out on a cruciform plan, with a crossing tower and two short transepts. The north transept served as Darlington's first grammar school.

The church was comprehensively restored in 1864 and all the stained glass is Victorian. One of the 19th-century windows was designed by the artist Daniel Cottier, a friend of Vincent Van Gogh. 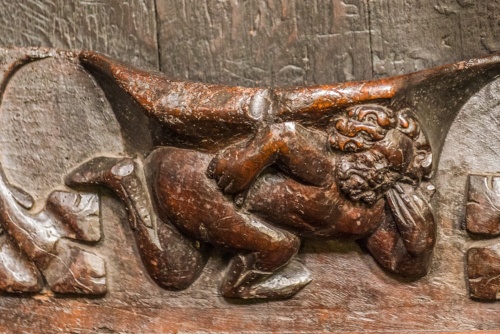 The finest historical furnishings include a set of medieval choir stalls with misericords, attributed to Bishop Langley. One misericord shows a winged lion with the face of a man, while another depicts a running man. Perhaps the most intriguing misericord shows a crowned lion on a boat, with an arm raising a sword from the water.

The font dates to the 14th century and is topped with a beautifully carved 17th-century cover. Under the south arcade is a Saxon cross head with traditional Celtic interlace carving. The cross head is thought to date to the late 10th century.

Set into the north wall of the chancel is an Easter Sepulchre crafted around 1450. 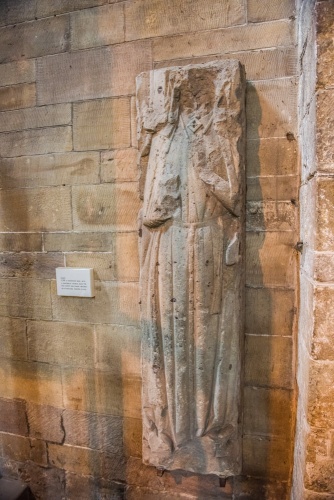 13th-century effigy of a woman

The column at the west end of the north aisle arcade has holes once used to secure a chained Bible. Beside the neighbouring column is a Saxon sundial, cut into a slab of red sandstone. Curiously, the dial is carved on both faces. One side has eight concentric circles, the other has six. Historians think that one side was carved as a trial effort before the 'real' second side was attempted.

One oddity in the south transept is a glass case holding an 1878 'Ringing Machine', a mechanical device designed by Edwin Cowper a Darlington dentist, to ring a plain course of Plain Bob Triples on a set of hemispherical bells. 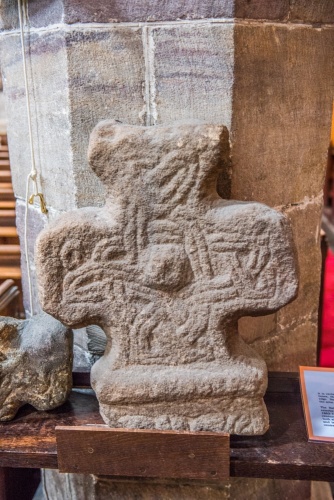 St Cuthbert's is a delight; a wonderful 13th-century church full of historical interest. The church has limited opening hours. When we visited that was 11 am to 1 pm daily, but please do check with the official website for current times. 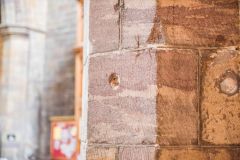 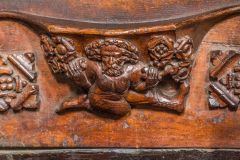 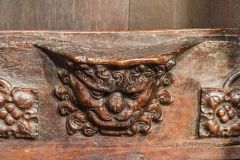 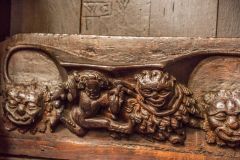 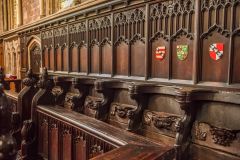 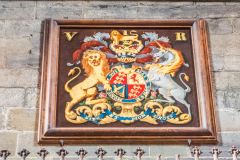