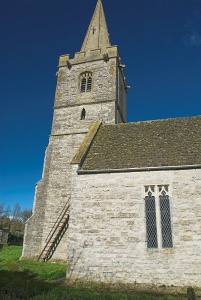 Ashleworth is located in northern Gloucestershire, on the west bank of the River Severn, in that rather forgotten section between the Forest of Dean to the west and the north Cotswolds to the east.

The village was mentioned in the Domesday Book, at which time it was called Escelesworde, which translates loosely as Aescel's farmstead, or enclosure. After the Norman Conquest the manor was held by the Earls of Berkeley, but in the 12th century Robert Fitzharding, the earl at that time, gifted Ashleworth to the Abbey of Bristol.

Henry VIII later gave the manor to the Bishop of Gloucester. Today Ashleworth is a prosperous-looking place, with a pub, modern houses, and a fair number of older cottages of Cotswold stone around a large green. The village itself is on a rise, quite some way away from the ancient parish church of Saints Andrew and Bartholomew. 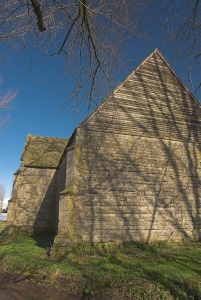 The church is tucked away behind a medieval tithe barn (see below). The church is primarily 12th and 13th century, with later remodelling, but the origins are pure Saxon.

Much of the north wall is built of striking Saxon herringbone stonework. The interior features one of the earliest known examples of a royal coat of arms over the south chapel; this dates from the reign of Edward VI or, possibly, Elizabeth I.

Beside the church is a huge medieval tithe barn, now in the care of the National Trust. The barn was built in the period 1481 - 1515 by Abbot Newland of Bristol Abbey, and is composed of ten bays. The interior roofing is a wonderful example of medieval timber framing.

A 14th-century preaching cross stands upon a three-step plinth on the village green. Preaching crosses were put up to designate a place where travelling monks or other religious officials would preach. They are often found at crossroads or other open spaces providing good access to local inhabitants in the late Saxon and medieval periods.

Though the Ashleworth example is called a 'cross', it is really more of a simple column with a four-sided top which has been carved with religious scenes. The cross was lost for many years until it was found hidden in a chimney in one of the cottages that line the green. The scenes carved upon the cross are thought to represent Mary and John, a Virgin and Child, St Augustine, and Robert Fitzharding, founder of Bristol Abbey. Apart from the church and tithe barn, Ashleworth has a number of interesting older buildings, which are, unfortunately, not generally open to the public. These include Ashleworth Court, built in 1460, and still retaining its great hall, Ashleworth Manor (1460), a half-timbered manor house once owned by the Abbot of Bristol, and Foscombe House, a Victorian Gothic fantasy constructed by Thomas Fulljames.

Ashleworth is located on a minor road just off the A417 about 3 miles north of Gloucester. The church and tithe barn are located to the east of the village and are signposted from the village green.

I'd like to express my appreciation for the excellent booklet 'Notes on the History and Architecture of Ashleworh Church' upon which much of the information in this article is based.

More self catering near Ashleworth

More bed and breakfasts near Ashleworth