The Green Man is a fascinating pre-Chritian relic, a pagan fertility symbol that survived well into the medieval period. The Green Man is often portrayed as a face, half hidden by foliage, with vines emerging from his mouth. The Green Man is often found as a decorative element on fonts, column capitals, misericords, and on roof bosses. If there can be said to be a female counterpart to the Green Man, it would be the sheela-na-gig, a carved or painted female figure, usually shown exposing her genitals. These figures are often seen on column capitals, friezes, or pilaster strips.

There are regional variations of the Green Man. Among the most intriguing is the woodwose, seen mostly in Suffolk and Norfolk. The woodwose is portrayed as a wildman of the woods, carrying a club, and clad in foliage. Where the Green Man is usually only shown as a face, the woodwose is depicted as a whole, standing figure. For more, see our short article on Suffolk woodwoses.

Among the best Green Man figures I have seen on my travels are those at Widecombe-in-the-Moor (roof boss), Garway, Herefordshire (capital carving), St David's Cathedral, Pembrokeshire (misericord), and All Saints church in Oakham, Rutland (carved capital). One of the most unusual Green Men is a stained glass likeness in the east window of the church at Pennal, Gwynedd. This is thought to be the only depiction of a Green Man in stained glass in all of Britain. 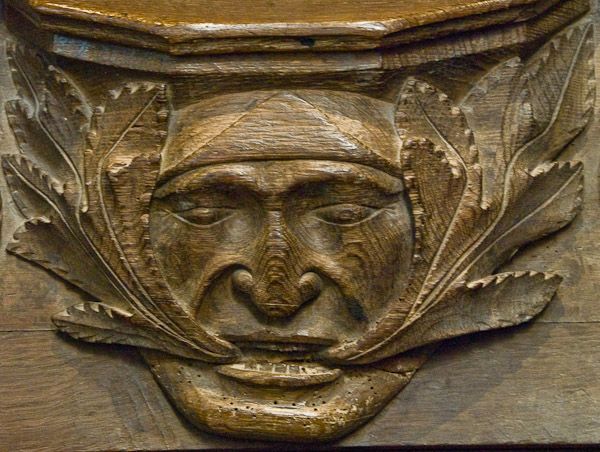