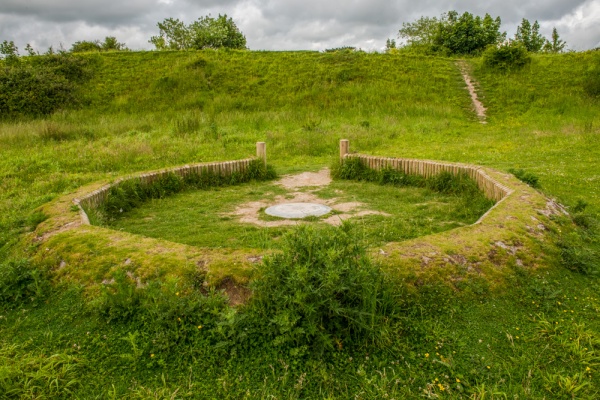 Danebury Iron Age Hillfort is a hilltop earthwork enclosure built about 500 BC and occupied until the coming of the Romans to Britain. It is more than just 'a hillfort'; to archaeologists you could say that Danebury is 'the' hillfort. It is a 'type-site', or model for understanding Iron Age hillforts in general. Given its importance to archaeologists, it is understandable that Danebury is one of the most heavily studied hillforts in Britain.

The first excavation took place in 1859 under the direction of an antiquarian and British Museum collector named Augustus Wollaston Franks. The first thorough archaeological investigation, however, was headed by Augustus Pitt-Rivers (known as the founder of the Pitt-Rivers Museum in Oxford).

These 19th-century investigations pale by comparison with the 20-year dig headed by Barry Cunliffe, beginning in 1969. Cunliffe and his team excavated over half of the fort's interior, and the Danebury dig was the longest of any hillfort in western Europe. It is thanks to Cunliffe that we know so much about Danebury, and by extension, about hillforts in general.

The fort was constructed in three phases, beginning in the middle of the 6th century BC. This first phase consisted of a single ditch and bank enclosing an area of 12 acres (5 ha), with two gateways. In the northern part of the fort were 4 timber granary buildings, and to the south were roundhouses and storage pits. The gateway was defended by a timber gatehouse and the banks were reinforced with timber.

About 50 years later (around 500 BC) the bank was raised by adding more chalk, and the eastern gateway was widened. Both gates burned down shortly after, though whether by accident or from an attack we do not know. 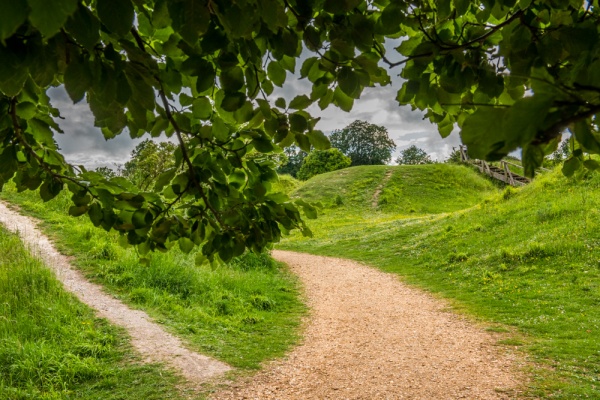 Around 400 BC the third construction phase began. The rampart was raised again, and the ditch redug. The ditch reached 6m deep and was 11-12m wide. The rampart was topped by a low stone wall, making the distance from the bottom of the ditch to the top of the wall about 16m.

The eastern gateway was rebuilt, and defended by earthworks on either side of a curving approach path. The path to the gate and the extra banks were clearly intended to provide extra defence. By making an attacking enemy follow the curving path, the defenders had more time to throw stones or other missiles.

The southwest entrance defences were slightly different, narrowing as they reached the gateway, forcing attackers to slow down as they massed together in a smaller space. It certainly seems that the natives of Danebury expected a military attack and created their network of banks to defend themselves.

At the same time, more granaries were built, replacing the earlier roundhouses. Houses were built near the ramparts, while a raised platform in the centre was used for shrines.

A new set of earthworks were raised outside the original ring. The extra space created by these extra banks and ditches was probably used to keep livestock.

Around 100 BC the site was abandoned. Bodies were found in charnel pits, and the east gate burned down once more. It seems reasonable to assume that Danebury fell to an attack, but many hillforts fell out of use around the same time, so it may not have been a conflict that made the inhabitants abandon Danebury.

The site was used sporadically after this, though on a much smaller scale. Timber buildings decayed, and cattle were grazed inside the inner ring. By the early 1st century probably just a single farm remained within the ring. 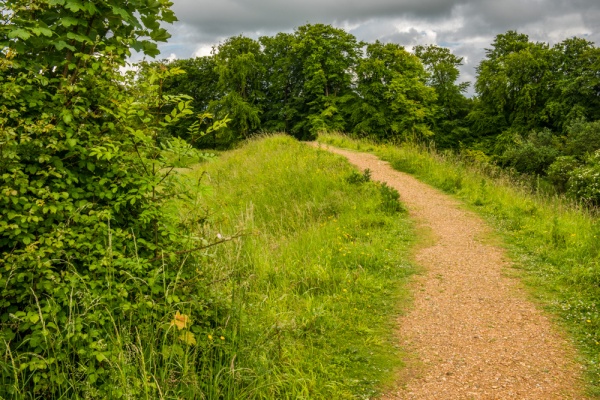 Walking along the top of the earthwork bank

Who lived at Danebury?

It seems likely that Danebury supported a sizeable population, perhaps as many as 300 people, possibly under the leadership of a chieftain, or king. Archaeologists found evidence of small-scale industry, and the central shrines suggest an elite level of society. Danebury probably served as a tribal treading centre, and a place for outlying farmers to seek shelter during times of conflict.

Danebury is well signposted off the A30 just west of Stockbridge. The official postcode is SO20 8UL, but depending on your satnav that may lead you to a nearby farm. It really is very simple to reach the hillfort from Stockbridge - just follow the signs from the A30. From the A30 a minor road runs northwest until you come to the base of the hill on the left side of the road. There is a small parking area at the bottom, and a lane leads uphill to a second parking area further up, where you will find information panels and visitor toilets.

From this second parking area, the trail emerges into open grassland and climbs to the treed summit of the hill where you can see a trig point on a small hillock below the hillfort and the earthwork banks ahead of you. The views from this open grassland area are simply superb on a sunny day.

A fence encloses the earthwork banks and ditches that acted as the outer defences of the fort. You can climb the banks and walk around the entire fort, looking down into the fairly level central area. In the centre you can see a small rise, thought to be where religious ceremonies were carried out. Near the fort entrance is a replica of a circular hut foundation, similar to the huts found by archaeologists during excavations on the site.

Finds from the Danebury site are on display at the Museum of the Iron Age in Andover. 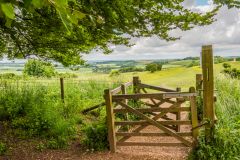 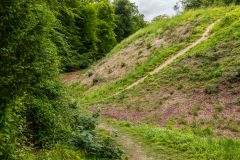 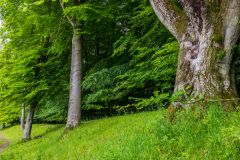 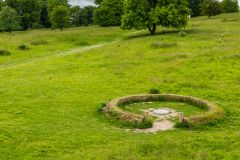 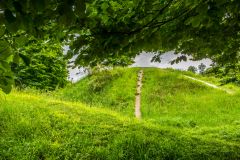