HERITAGE HIGHLIGHTS:   Charles I may have spent his wedding night in chambers over the gate 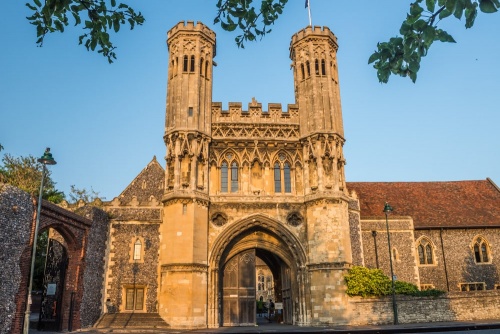 Fyndon Gate is the original gatehouse to St Augustine's Abbey. It was rebuilt from 1301-1309 by Abbot Fyndon. In 1625 Charles I and Henrietta Maria stayed in the State Chambers over the gateway arch on their wedding night, following their marriage in Canterbury Cathedral. Elizabeth I is also reputed to have been welcomed to the State Chambers.

The gate is flanked by very tall twin towers, fancifully decorated with statues and embellished with crenellations. In front of the gate is a long green space named Lady Wotton's Green. A garden area stands in the green, with statues of King Ethelbert and Queen Bertha, who welcomed the mission of St Augustine to Kent in AD 597.

After the abbey was dissolved by Henry VIII the abbey buildings were converted to a number of other uses. The gatehouse served for some time as a brewery under the ownership of Messrs. Bennett and Beer, who produced St Augustine's beer (naturally!). 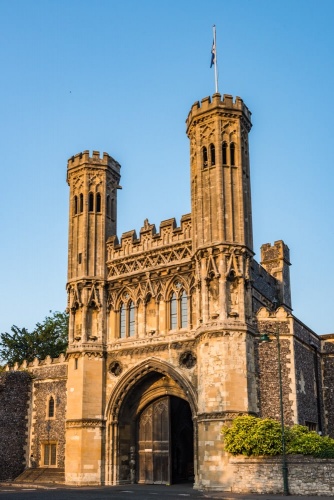 The gate from the south west

The gate was damaged by bombs in WWII and had to be rebuilt, with the result that some of the stonework is obviously a slightly different colour than the remainder.

It now serves as the main entrance to the King's School grounds adjoining the abbey.

Visiting the Fyndon Gate is easy. From the cathedral gates, turn east onto Burgate and follow it to the end. Cross Lower Bridge Street and turn left, following the road until it meets Lady Wotton's Green on the right. You will see the gateway at the eastern end of the green, past the iconic statues of Queen Bertha and King Ethelbert.

More self catering near Fyndon Gate >>