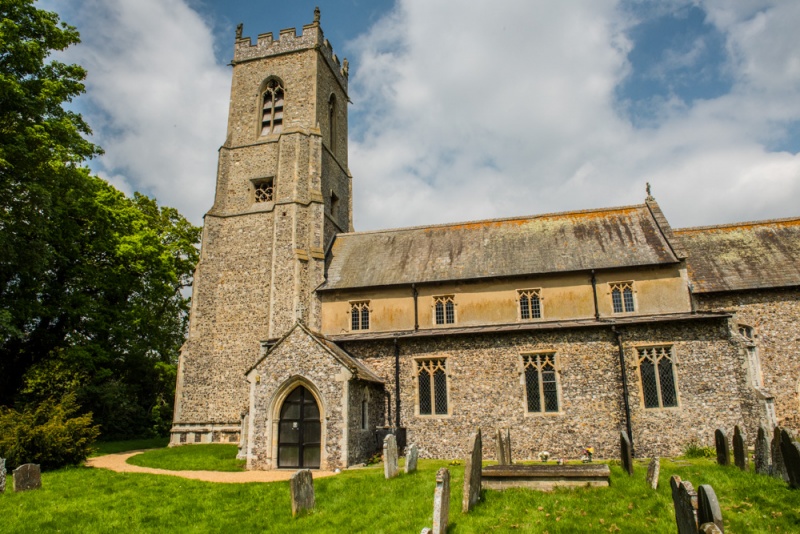 The attractive parish church of St Benedict stands beside the River Bure and dates to the 13th century. The location is idyllic, and our visit was made even more idyllic by a friendly peacock who wandered through the churchyard and preened for photographs.

The church's dedication tells something of its origins. It originally belonged to St Benet's Abbey a few miles distant (Benet is an abbreviated form of Benedict). The abbey was founded around AD 1020 for Benedictine monks. It was one of the most important monastic houses in England and the only one to be spared during Henry VIII's Dissolution of the Monasteries.

Though the abbey site is now in ruins, the Vicar of St Benedict's church in Horning is still officially the Prior of St Benet's. Each year the Bishop of Norwich joins the vicar in an outdoor service at the site of the abbey church.

In the south aisle is a banner bearing the arms of the Bishop of Norwich and the Bishop/Abbot of St Benet's Abbey on one side, and the Abbot's arms on the other. The banner is carried in a special wherry up the River Bure to the Abbey site on the first Sunday in August. 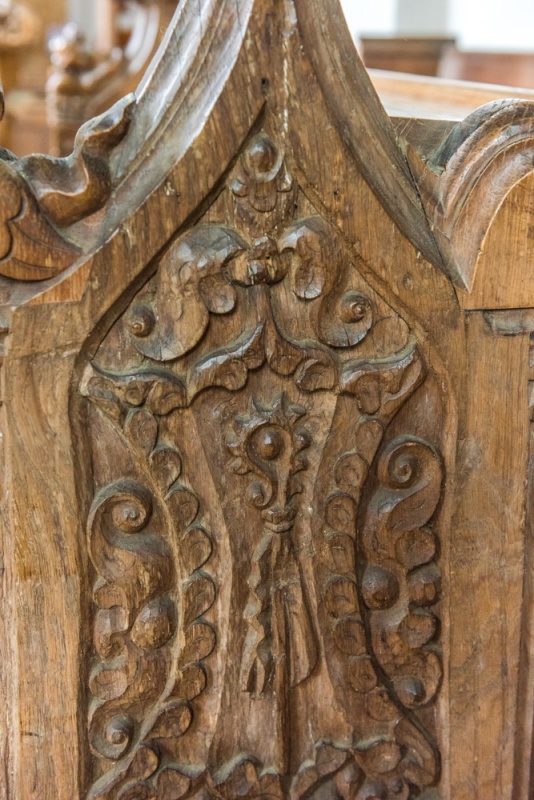 The connection between the church and St Benet's Abbey is emphasised as soon as you enter the church, for the first thing you see is a scale model of the Abbey as it was in AD 1500.

Much of the church interior was remodelled in the Victorian period, but a 1598 memorial brass remains.

The church was erected around 1220 on the foundations of an even earlier church. The best reminder of the building's ancient origins is a dog-toothed arch over the priest's door in the chancel wall. Beside the doorway is an early scratch dial.

The church was in very poor condition in the mid-18th century and the parishioners came up with a rather unusual solution to pay for much needed repairs. The tore down the north aisle and sold the stone to raise money to pay for restoring what remained of the building. They also sold all but one of the bells to raise funds.

One of the best surviving features is the 14th-century octagonal font, with its bowl lined with lead. The rounded north nave pillars are 13th century, and the arcades have been filled in to create a new exterior wall after the aisle was demolished.

The south arcade is made of octagonal pillars, installed in the 14th century. It is fascinating to see how architectural styles changed in the century between the building of the north and south arcades.

The church is filled with open benches, many of them decorated with carved bench ends in a variety of styles. All the nave pews are carved with different forms of poppyhead decoration.

The Jaws of Hell

One fascinating 14th-century bench end in the chancel depicts the 'Jaws of Hell', a grotesque figure of a horned Satan feeding sinners to a monster. Another bench end shows a pair of serpents attacking a fallen man. One carving depicts the arms of St Benet's Abbey. This is thought to be the earliest known depiction of the Abbey's arms. 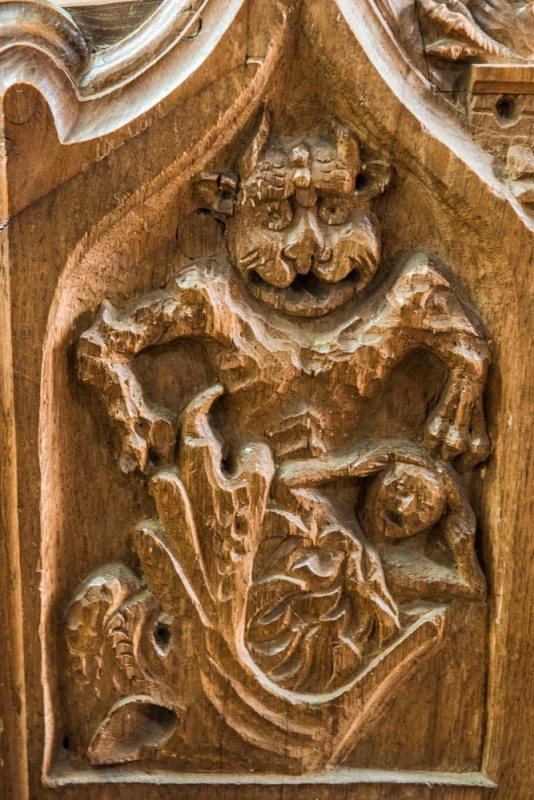 Other bench ends are carved with armrests in the shape of dragons, a griffin, and a man holding a serpent in a fierce headlock.

In the south aisle is a large iron-bound parish chest, dated to the 13th century. Historic monuments include a 1596 memorial brass to Elsebeth Milward.

In one corner of the churchyard a trail leads down to the church's own staithe on the River Bure. There is free mooring for visitors arriving by boat, and a quiet bench to sit and enjoy the peaceful Broadland scenery.

Finding St Benedict's church isn't intuitive. It is cut off from the village of Horning and Horning Staithe. If you are travelling along the A1062 you need to turn onto Upper Road and then again onto Church Road. There is a large parking area by the church and it is usually open daylight hours to visitors.

Why is the church so far from the village? The usual answer when the church and village are far apart is that the village moved after the Black Death in the 13th century, but that isn't the case here. It seems that the church was erected to serve a scattered collection of hamlets. It was also situated to be on a direct route to the Abbey. Over time one of those hamlets grew up to become the main village, but it never grew close to the church site. 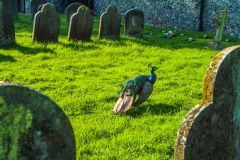 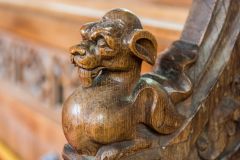 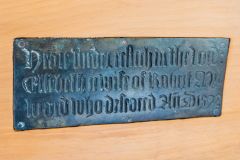 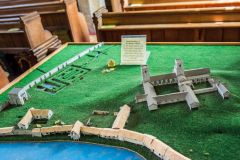 Self Catering near Horning