The history of Hickling village goes back to at least the 5th century AD. There was a church recorded in the Domesday Book of 106, and it seems certain it had stood for several centuries before then. Excavations in the churchyard revealed a prehistoric flint tool and a piece of Saxon pottery.

The present church was built in the 13th century by the canons of Hickling Priory, founded by the Valoins family in 1185. Hickling must have been a place of some importance by that time, for it had a weekly market. The 13th-century church was dedicated to All Saints.

In 1536 the Priory was suppressed by Henry VIII and the priory estates were granted to Sir William Wodehouse. Wodehouse was knighted in 1544 and served as an MP for Yarmouth and a Deputy Admiral of the Fleet. After the Dissolution of the Monasteries severed the church's connection to Hickling Priory it was rededicated to St Mary.

You enter the church through a two-storey south porch, slightly later than the main body of the church. Above the entrance arch is a small chamber, or parvise, reached by a spiral stair from the choir vestry. 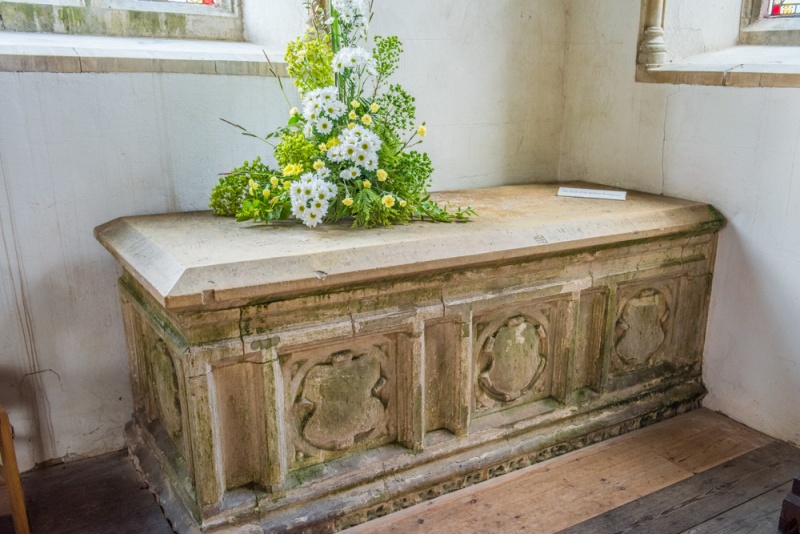 At the west end of the nave is an octagonal 14th-century font with traceried panels and foliage carvings decorating the stem and font bowl. Near the font is the parish hearse, a carriage made to be drawn by hand. It was last used in 1951.

Near the pulpit is Sir William Wodehouse's large chest tomb. The coat of arms has disappeared, but the tomb is covered with some fascinating graffiti, some of it over 367 years old. One inscription dates from the Civil War and says, 'A Roundehead 1645'. The oldest piece of graffiti dates to 1627. Look for a carving of a Nine Men's Morris game board amongst all the graffiti. This was a board game for a pair of players, who moved nine counters around a square grid.

In the sanctuary, on the north side of the altar, is a 13th-century stone coffin lid which was found buried under the nave during a Victorian church restoration. The coffin is carved with a Latin inscription that translates as:

'Let Rosa by the Mercy of Christ Enjoy the Light
of Heaven Whose Heart by the Law of Earth is
Buried Beneath the Stone'.

It seems that 'Rosa' may have been the wife or perhaps the daughter of Robert de Valoins, lord of the manor of Hickling. Since only her heart is buried here it seems that she must have died overseas. It was common for people who died abroad, such as Crusading knights, to be buried where they died, but have their heart brought back to Britain for burial at the family seat.

Since the Valoins family had a close link to Hickling Priory it seems likely that Rosa was buried there, and the coffin lid brought into the church after the Priory was suppressed. The communion table was installed between 1603-1625. Above it, under the large east window, is a memorial to Rev. John Wells, who served as Vicar of Hickling for 34 years, beginning in 1769. In his will, Rev. Wells left £250 to educate the poor of the parish.

This bequest launched the first school in Hickling and helped finance the school until government grants became available in 1875. The money left by Wells is now given as prizes to pupils who have made the most progress in Hickling School.

On the north chancel wall is a memorial to John Calthrop (d. 1688), designed by William Stanton, with an ornate coat of arms sculpted in marble. The monument bears an epitaph in heroic couplets, extolling the many virtues of the deceased. Calthrop, his butler, and 20 residents of Hickling died tragically in an outbreak of smallpox in 1688. The epitaph reads in part:

Here underneath the stone interr'd doth lie
The fatal conquest of proud destiny
Whose great deserts & noble parts did prove
Him worthy while alive of all mens love
Now dead in peace let him possess this ground
Who left his friends with grief & sorrow drown'd.

The striking west tower is perhaps the best feature of the church. It stands 90 feet high, with diagonal corner buttresses rising over 3 stages high towards an embattled top. The tower carries a ring of five bells. The oldest was cast by Simon Severey in the mid-15th century (we do not know the exact date but Severey died in 1454).

I've been to Hickling church several times. It is a gem of a historic building, in a beautiful setting.