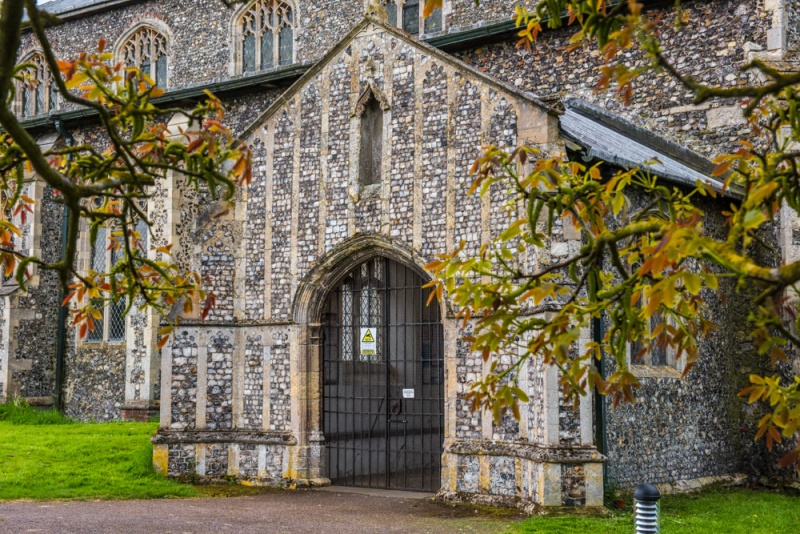 St Catherine's church seems too large for the pretty village of Ludham, yet its size and splendour is a reminder of Ludham's wealth in the heady days of the 14th and 15th centuries, when Norfolk thrived on the proceeds of the wool trade.

We do not know when the first church was built in Ludham, but it must have existed by the early 11th century, perhaps as early as AD 1016, when King Cnut granted the manor of Ludham to the Abbey of St Benet, which he founded that same year. The first written record of a church comes from 1047, in a charter of Edward the Confessor.

In 1220 St Catherines was granted to the abbey, meaning that the abbot was the rector and appointed a vicar to perform services. At the Reformation St Benet's was not dissolved - the only monastery in England to be spared - and the Abbot became Bishop of Norwich. As a result, the Bishop of Norwich is officially still the Abbot of St Benet's, and is both the rector and the patron of the living of Ludham, with the right to appoint a vicar. 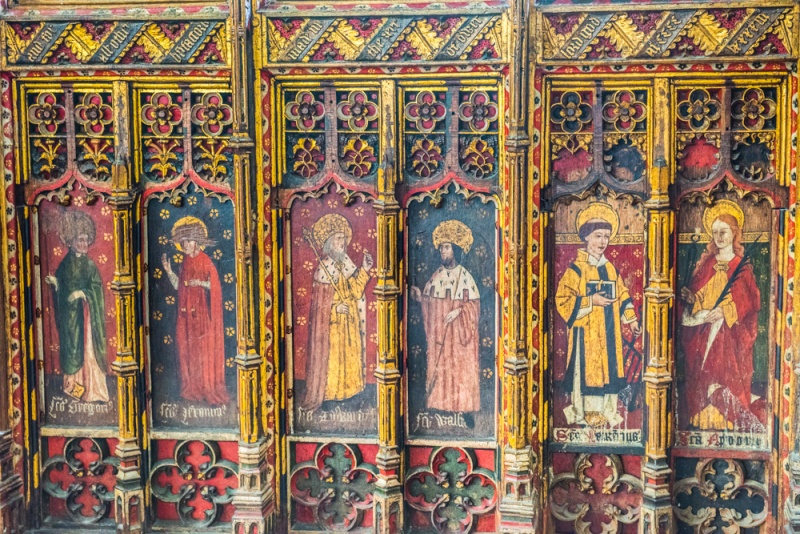 The painted base of the 15th-century screen

The oldest part of St Catherine's is the chancel, which stands on the site of the 11th-century monastic church. During the 15th century the Abbey had a farm at Ludham Hall, and after the Reformation this was converted to a residence for the Bishop of Norwich. The Bishops maintained close links to St Catherine's church, and Bishop Samuel Harsnett donated one of the church's five bells in 1619.

The present church was begun in the 14th century, but only the striking west tower and the chancel date from this period. The nave was rebuilt in the 15th century in Perpendicular style and given a superb hammer-beam roof of oak. The roof has symbols of St Catherine's wheel carved into alternating roof spandrels.

In 1493 a beautifully carved and painted rood screen was installed between the nave and chancel. The Ludham screen is one of the best in Norfolk, a county with plenty of competition. The screen base is divided into six panels, three on either side of the passage into the chancel. 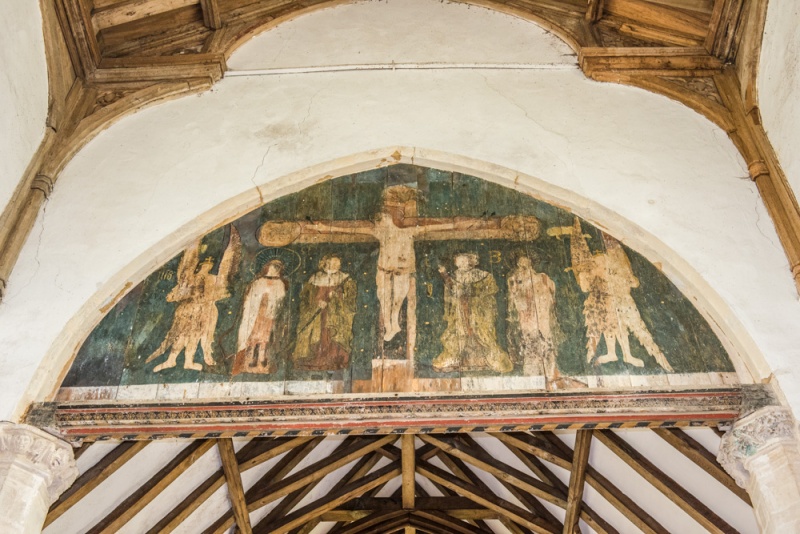 Mary I Crucifixion painting on boards

The Mary and Elizabeth Paintings

St Catherine's is like a microcosm of the English Reformation. Here we have all the signs of the great break from Rome initiated by Henry VIII and continued under Edward VI, the efforts of his daughter Mary to return England to Catholic worship, and Mary's half-sister Elizabeth I undoing all of Mary's efforts.

Above the chancel arch is a painted scene on boards, depicting Christ on the cross, installed during Mary's brief reign to replace the rood, which was ordered to be destroyed under Edward VI. Mary reigned only 5 years, to be replaced by the Protestant Elizabeth

In a pragmatic move, the vicar and churchwardens of Ludham had a canvas painted with a royal coat of arms, with a Latin inscription that translates as, 'I am not ashamed of Christ's gospel. Long live Queen Elizabeth'. The canvas was placed over the earlier Catholic image of the Crucifixion, thus neatly returning Ludham to Protestantism without having to destroy the Catholic image.

During the tumult of the Civil War and Commonwealth period both the canvas and the painted boards were taken down and hidden. The boards were wrapped in the canvas and concealed in the remains of the rood stair, which was bricked up. They were not rediscovered until 1879 during an investigation by the Norfolk Archeological Society.

The boards and canvas were reinstalled over the chancel arch in 1890, but this time arranged so that both could be seen. The 'Catholic' boards face the nave, while the 'Protestant' canvas faces east, on the chancel side of the arch. 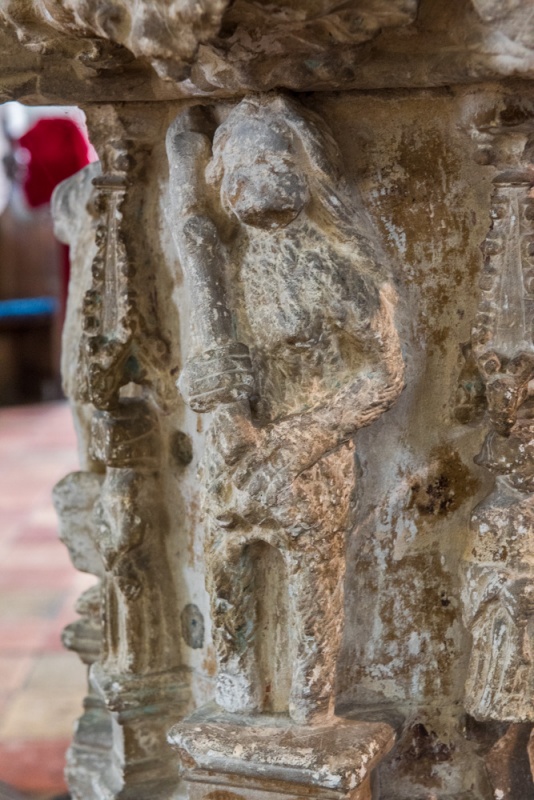 Carving of a female woodwose on the font stem

Other interior highlights include an ancient alms chest dated to around the time of Edward VI and an old parish chest made from a solid oak log.

One of the most intriguing historic features is the beautifully carved octagonal Perpendicular font. The font bowl is carved with symbols of the Evangelists, but it is the stem that really deserves attention. Here you see alternating figures of lions and woodwoses. The woodwose is a figure unique to East Anglia and is found most frequently in Suffolk. It is a pre-Christian wild man of the woods figure who carries a club. What makes the Ludham woodwoses so remarkable is that one of the woodwoses is female.

In the chancel is a richly decorated 15th-century sedilia, rising in three canopied steps to a piscina. Each arch between the sedilia seats is carved with a human head.

Set into the floor are several brass inscriptions. One of these brasses is in the shape of a heart and commemorates Grace Whitey, who died in 1655. Below it is a plain brass rectangle with an inscription to Stephen White (d. 1659) and above it is another brass to Richard Barker from the same period.

One final feature is a vividly painted clock set in the north face of the tower, dated 1762. 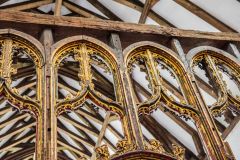 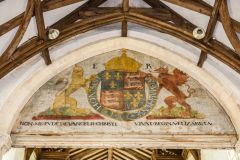 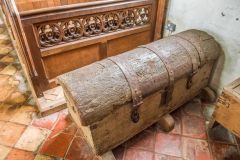 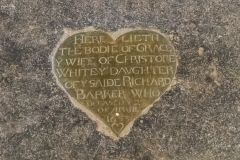