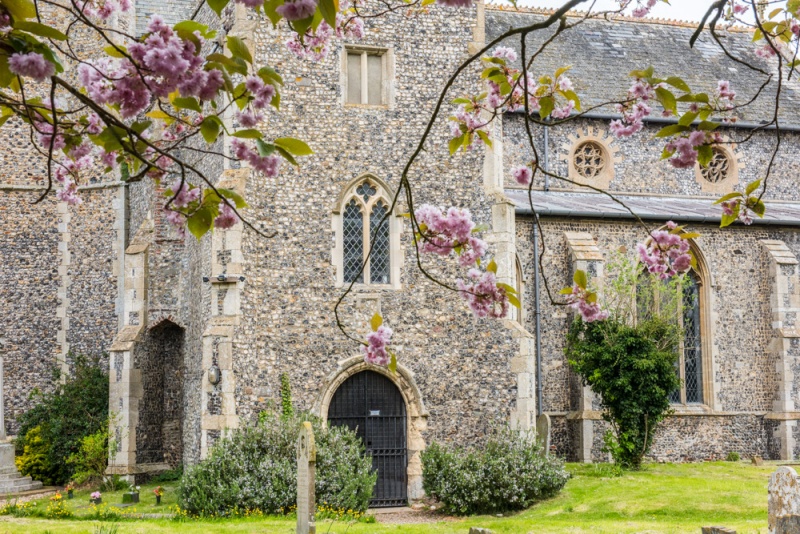 Holy Trinity church dates to the 13th century, but there may have been a church on this spot since the late Saxon period. The oldest part of the present building is the south-west corner of the chancel. If you look closely at the stonework you can see that it is made of whole pieces of flint, rather than the attractive knapped flint used in the rest of the building.

You can also see what appears to be a blocked priest's doorway in the wall. Some of the stonework is in herringbone style, common in the late Saxon and early Norman period, but it seems doubtful that this is any earlier than 13th century.

Most of the church dates to the middle of the 14th century, just prior to the onset of the Black Death in 1348. On the north side of the chancel is the tomb of Sir Oliver de Ingham, who died in 1343. The tomb is in the position usually reserved for the founder, which might suggest that the church was erected around 1343, however the style of Sir Oliver's effigy points to an earlier time period, so it seems more likely that he had his own tomb and effigy prepared during his lifetime. 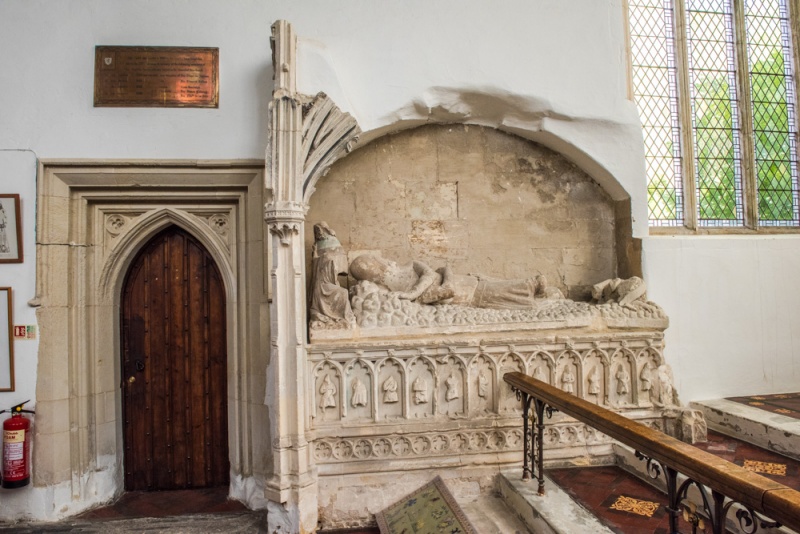 The nave was certainly rebuilt by Sir Oliver's daughter Joan and her husband Sir Miles Stapleton, after Sir Oliver's death. The Stapleton's founded a college of Trinitarian friars dedicated to the Holy Trinity and St Victor to serve the church. There were two brothers, a sacrist, and a prior to serve Ingham and nearby Walcot churches, and the sacrist also acted as the vicar of Ingham. Though it was never very large, Ingham Priory was the mother house for all the other Trinitarian foundations in England.

There are traces of the monastic buildings on the north side of the church, but the best surviving parts of Ingham Priory now form the core of the nearby Swan Inn.

The college had risen to support six canons, a sacrist, and a prior by the 16th century. Perhaps the college finances could not support so many, for when Thomas Cromwell's commissioners descended upon Ingham in 1536 to suppress the college, they discovered that it had already stopped operating.

Though the nave is mostly 14th century, the south porch is from 1440. It is almost unique in English parish churches in that there are two storeys above the porch entrance. These two chambers were used as a residence by the sacrist of Ingham Priory, in his role as vicar of the church. Only seven parish churches in England have two upper storeys to a porch like this.

Another late medieval addition is the west tower. We do not know exactly when it was begun, but in 1488 the rector of Sutton left money in his will towards the tower, so we know it was being built at that time. On the east face of the tower battlements is a Maltese Cross, the symbol of the Trinitarian Order.

The same symbol appears over the west door, along with arms of the church patrons, the de la Pole, Stapleton, Ingham, and Felbrigg families. There are two bells in the tower. The oldest is medieval, of an unknown date, and the second was cast in 1661.

The interior is a mix of original medieval features and the efforts of a Victorian restoration under the architect JP Seddon. Between the nave and chancel is the base of a medieval stone pulpitum, or screen. The font is 13th century, made of Purbeck marble, decorated with blank arches. 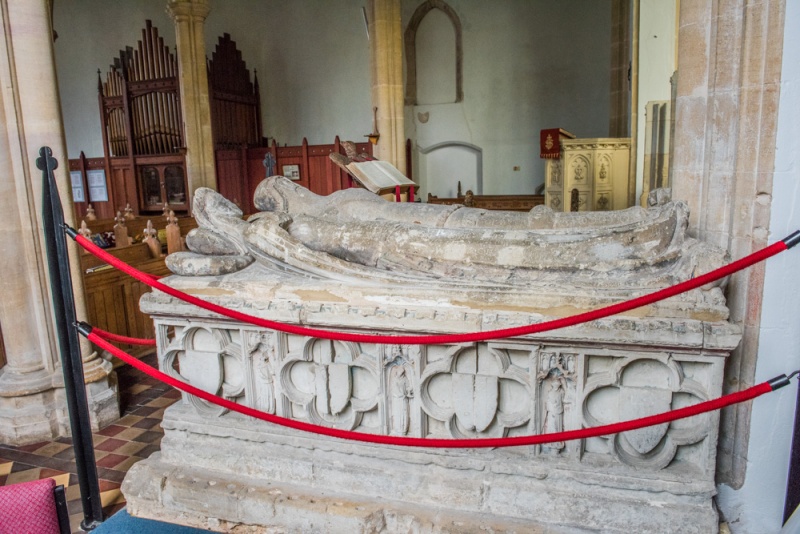 The main historic interest are the wonderful medieval tombs that survived the Victorian restoration. In the nave is the tomb of Sir Roger de Bois (d. 1300) and his wife Margery (d. 1315), with worn alabaster effigies of the deceased.

The style of the effigies suggest that they were carved well after the couple died. On the west side of the tomb chest is a carving of the Resurrection, and a similar carving is set into the cushion on which Margery de Bois' head rests.

On the north side of the chancel is the founder's tomb of Sir Oliver de Ingham, mentioned earlier. His effigy rests on an unusual bed of pebbles, a design found in only two other English churches. One of the others is at Reepham, and was likely carved by the same mason.

There is a worn memorial brass to Sir Brian Stapleton (d. 1438) and a later brass to Lady Elizabeth Calthorpe (d. 1536). On the wall is a copy of a rubbing taken of a brass to Sir Miles Stapleton and his wife Joan. The original brass was stolen several years ago, but the rubbing shows that the couple were depicted holding hands; one of the earliest memorials in England to show this symbol of conjugal tenderness. 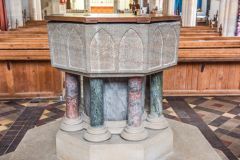 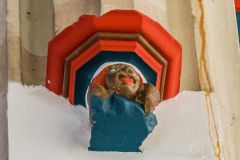 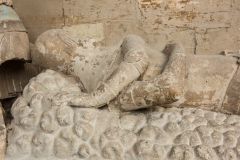 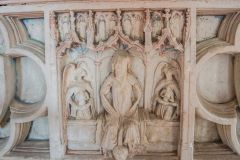 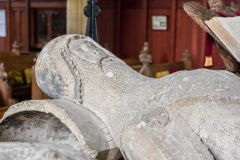