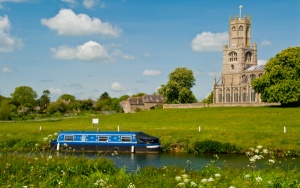 Fotheringhay Church
and the River Nene

One of the finest and most historically important churches in Northamptonshire, St Mary the Virgin and All Saints has seen more than its fair share of historical drama over the centuries. The church, with its distinctive octagonal lantern tower, stands between the River Nene and the Willow Brook and looks out across idyllic countryside.

It was not so idyllic in 1587, when Mary, Queen of Scots, was executed at nearby Fotheringhay Castle. The castle is now little more than a high earthen mound, possibly a result of slighting by order of Mary's son James when he took the throne as James I of England.

However, if Mary were here today she would probably recognise the parish church, which has changed little externally since her death.

To understand the history of Fotheringhay church you have to back in time to the 12th century when a motte and bailey castle was established on the north side of the River Nene by Simon de St Liz.

Within a few decades a Cluniac nunnery was founded slightly to the west of the castle. The nunnery moved to Delapre in the mid-12th century, but the castle survived and was extended in the late 14th century. 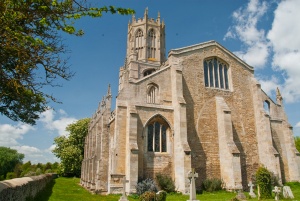 The East exterior of the church

Sometime before 1400 Edmund of York established a college of priests at Fotheringhay Castle. Their task was to pray daily for the souls of Edward and members of the House of York. In 1411 Edmund's son Edward moved the college from the castle to a larger site above the River Nene, on the south side of an existing Norman church.

It was a sizeable foundation; at its height there were 13 choristers to sing services, 8 clerks, 11 Fellows or Chaplains, a Preceptor, and a Master. Building on the college site had begun by 1415 but stopped after Edward's death at Agincourt in that year. Edward's body was brought back from France and buried in the choir, then only partly completed.

The college was restored in 1432 and a charter for a church granted to Richard, Duke of York in 1434. Fotheringhay is unusual in that we know the name of the master mason employed by Duke Richard; he was a man named William Hanwood, and he must have been either very confident in his abilities or very scared, for the contract he signed with Duke Richard said that he would be paid 300 pounds if his work was satisfactory, and sent to prison if it was not up deemed adequate.

Horwood is immortalised by a humourous gargoyle carving where the flying buttresses join the nave wall. Also represented by a grotesque carving are the mason's dog Blaster, his patron Duke Richard, his wife Cecily Neville, and a Green Man. 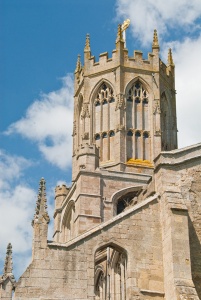 The original collegiate church consisted of a chancel, aisled nave, west tower, north porch, cloisters, and a number of smaller college buildings to the south of the church. The nave of the church was set aside for the use of local residents as a parish church, a fact that would later help St Mary the Virgin and All Saints survive the Dissolution of the Monasteries. The material was largely limestone ashlar, under a lead roof.

The most striking part of the building is the large tower with its distinctive lantern. The central post of the lantern supports a weather vane in the shape of a falcon in fetterlock, the symbol of the Dukes of York. Work was still unfinished in 1460 when Edward IV granted a new charter.

St Mary's (to give it a much shorter name) has strong connections to the Yorkist cause in the Wars of the Roses. The Dukes of York had a family mausoleum here.

Richard III was born at Fotheringhay Castle and traditionally is said to have been baptised in the church, though it makes just as much sense that he would have been baptised in the castle chapel. But the oft-maligned king has a much stronger connection to the church at Fotheringhay, for it was here in 1476 that he brought the bodies of his father Richard, Duke of York, and his brother Edmund, Earl of Rutland, for reburial.

The Duke and Earl had been killed at the Battle of Wakefield in 1460 and buried at Pontefract. Richard had them brought to Fotheringhay and reburied in an ornate chantry chapel in the choir. 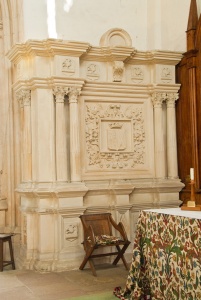 St Mary's suffered at the Dissolution of the Monasteries for its connection with the college of priests. The lead was stripped from the roof of the college cloister and choir, but as the nave was reserved for use as a parish church it was left alone. In time the cloisters and choir collapsed, and the rest of the church might have followed suit had not Elizabeth I stepped in.

The queen was alarmed at what might happen to the tombs of her ancestors so she granted money so that Duke Richard and Earl Edmund could be reburied in the sanctuary, on either side of the high altar. And there they rest today, in beautifully decorated Elizabethan tombs.

To the right of the altar is Duke Richard's tomb, and if you look down at the base of the tomb you can see a marble slab. This marble covered the original tomb in the choir before the choir collapsed.

On the shields that decorate the tomb is the Yorkist symbol of the Falcon and Fetterlock. The fetterlock is shown closed, signifying that the deceased has done his duty. If it is shown open it signifies that the Yorks are free to fly high (so naturally, when used on a tomb the fetterlock is always shown shut!). To the left of the altar is the tomb of Duke Richard's nephew Edmund, with his wife Cecily Neville.

Another reminder of the Wars of the Roses is the wonderfully painted pulpit, given to Fotheringhay church by Edward IV. It is decorated with the arms of the House of Plantagenet and the symbols of the Yorkist House; a white boar, white lion, and the black bull - for the three Yorkist brothers Richard III, Edward IV, and George, Duke of Clarence. Though the painting is modern, it follows known medieval patterns and colours. 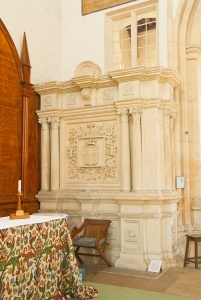 The large three-light east window of the south aisle is known as The York Window and commemorates members of the House of York who were connected to Fotheringhay castle, college, and church. It was a gift to Fotheringhay church of the Richard III Society in 1975.

The left light has heraldic devices of Edmund Langley, 1st Duke of York (1341-1402), and his wife Isabel of Castile and Leon. Beneath are the arms of the 2nd Duke, Edward of Norwich (1374-1415), and the traditional York badge of the Falcon and Fetterlock.

The centre light shows the royal arms of Richard III, with his wife, Queen Anne, and her father, Earl of Warwick (the 'Kingmaker'), plus Richard's White Boar badge. The right-hand light shows the arms of Richard, Earl of Cambridge (Edward's brother), Richard, 3rd Duke of York, and the White Lion device of the Mortimers (Anne Mortimer was Richard's first wife). The window also displays the Yorkist badges of the Rose en Soleil and the White Rose.

Other interior highlights include a 15th-century octagonal font carved with grotesque heads of humans and beasts amid foliage. Don't miss the wooden font cover, which was made from a medieval misericord rescued from the choir. The church interior is filled with Georgian box pews, with kneelers presented by the Richard III Society.

The pews were inserted by Thomas Belsey, who bought the Fotheringhay estate in 1804 and removed the old late medieval pews. Between the arches of the nave arcade are modern heraldic shields with coats of arms of people connected to the church and castle. Behind the high altar is a very fine Georgian decalogue (a set of three panels, painted with the Ten Commandments, Lord's Prayer, and Apostle's Creed). 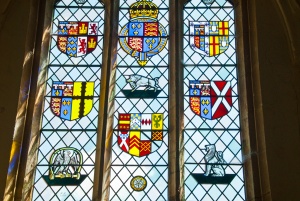 If you stand under the tower at the west end of the church and look straight up you will see one of the best features of the church; the marvellous fan vaulting that supports the upper stages of the tower. In the centre is an opening to let bells be raised up. This is now filled in with a modern painting of the Yorkist Falcon and Fetterlock symbol.

Nearby are the great west doors. These would rarely be opened, and then only on special ceremonial occasions, as when the coffins containing the Duke of York and Earl of Richmond were carried through the opening on 29 July 1476 to their burial in the collegiate church choir. Over the east tower arch is a royal coat of arms to George III dated 1807 and bearing the artist's name (a rarity for coats of arms).

One fascinating feature at Fotheringhay is a secret chamber found beneath the porch in 1990. Within this chamber were numerous fragments of medieval stained glass, among then depictions of Yorkist badges, angels, and iconographic symbols. Some of these have been inserted in a window in the sexton's room, others are on display in a glass case for visitors to see.

Near the north wall is an old bier used to carry coffins to funerals, and leaning against the wall is a set of pew ends removed from the church when the box pews were installed in the Georgian period. These carved panels show delicate trefoil tracery patterns.

In the entry porch, above the door to the Treasury chamber, is a small stone lion that came from Fotheringhay Castle. For many years the lion graced The Lamb pub in Oundle but was gifted to the church in 1976 and installed in the porch in 1995.

I didn't know what to expect when I visited Fotheringhay. If the truth be told I came here just as much to see the castle as the church, but it was the church that really captured my imagination. There's just so much to see and appreciate!

If you are a 'Ricardian' (supporter of Richard III) you will be in heaven visiting Fotheringhay, but even if you have only a passing interest in Richard III you will enjoy this spacious church for its wonderful Perpendicular architecture, fascinating history, and associations with some of Britain's most interesting historical figures.

The church is generally open daylight hours and is well worth a special trip to see. From the church it is a very short stroll to the castle mound. On the way you will pass New Inn, now Garden Farm. This was built by Edward IV for visitors to the castle and bears heraldic arms of the House of York around the wide entrance gate.

One of the best places to view the church is from the 18th-century bridge across the River Nene. This bridge replaces an earlier bridge built by Elizabeth I using stone from the collegiate choir of the church. 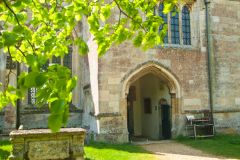 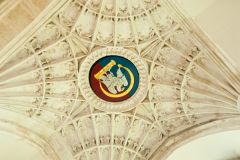 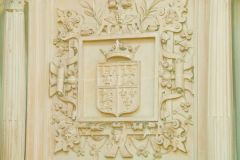 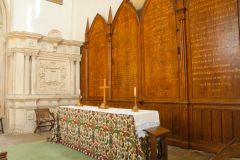 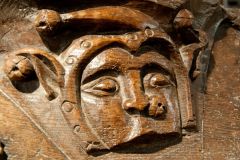 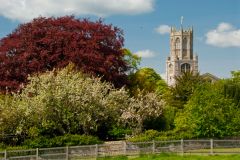 More self catering near Fotheringhay

More bed and breakfasts near Fotheringhay