Nassington, St Mary the Virgin and All Saints Church 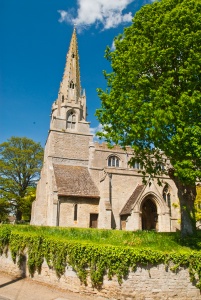 St Mary's (or, to give the church its full dedication, St Mary the Virgin and All Saints) is a lovely country church dating to the Saxon period, with remains of a late Saxon cross-shaft and a series of well-preserved medieval wall paintings.

There has been a church at Nassington since at least the late Saxon era. Evidence of the Saxon building can be found in the long-and-short quoins of the tower, the west wall of the nave and south aisle.

In the 12th century the Bishops of Lincoln established a prebend here - an estate for church officials. The Prebendal Manor stands almost directly opposite the church. The prebend made Nassington an important place and probably explains why the Saxon church was rebuilt and extended in the 13th century.

A 14th-century fire necessitated a rebuilding of the south aisle, chancel arch, and the nave arches. Further rebuilding took place in the 15th century and again in the Victorian period. 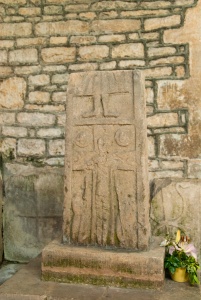 One intriguing moment in the church's history occurred in 1299 when the Bishop of Lincoln ordered the vicar at Nassington to excommunicate 'certain persons who grievously molested the Church at Nassington'.

What form this 'molestation' took we are left to speculate. Perhaps these 'certain persons' stole something of value from the church or engaged in some particularly serious vandalism. We do know that there was a serious fire at Nassington at the turn of the 13th century, so perhaps the excommunication relates to setting the fire.

Excommunication was a terrifying sentence to pass on anyone in those days; it pretty well guaranteed an eternity in Hell, so whatever act was committed upon the church it must have been very serious indeed.

In the north aisle is a section of a 10th-century cross, discovered during repair work in the 1880s. The cross would originally have stood outside the church.

What we see today is just the base of a much larger shaft which would have stood approximately 10 feet high. It is carved on all four sides; the side panels with interlace patterns and the front with a Crucifixion scene, with a sun and moon over the cross arms and figures of Roman soldiers below. The figure of Christ is huge, his feet touching the ground, his head almost at the top of the cross.

The back of the shaft is carved with a series of complex circles and geometric patterns. Though the carvings are rudimentary and worn, the effect is marvellous. 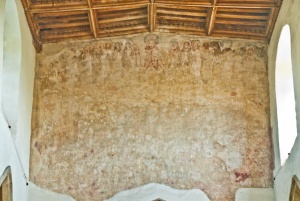 Aside from the cross-shaft the major historic interest in St Mary the Virgin and All Saints is a series of 14th and 15th-century wall paintings over the chancel arch, in several window splays, and between arcade arches.

The largest of these paintings is over the chancel arch, where a faded scene depicts the Day of Judgement, or Doom. Much of the lower section of the Doom is too faded to be recognisable, but the upper section is very clear and shows Christ flanked by haloed figures.

On the north wall is a painting of St Michael using a scales to weigh souls, flanked by figures of the Devil and the Virgin Mary. Between a set of nave arches is a mounted figure of a knight beside a standing figure.

On the north wall is a depiction of St George, though one source suggests it is St Martin of Tours spreading his cloak. Above this figure is a faded depiction of St Catherine with her wheel.

Against the north wall is a 17th-century clock mechanism in a glass case, below a gilded clock face dated to 1695. The maker was probably Iohannes Watt (John Watts), a clockmaker from Stamford, Lincolnshire.

This is a lovely church, with a striking spire. The combination of the wall paintings, Saxon cross-shaft, and the importance of Nassington as a medieval prebend makes St Mary's an absolute must-see in this area. Don't miss Prebendal Manor across the road; the oldest known house in Northamptonshire. The church is normally open daylight hours. 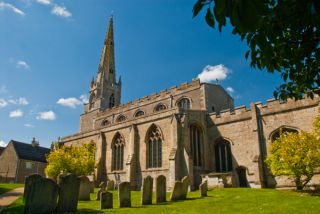 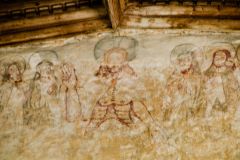 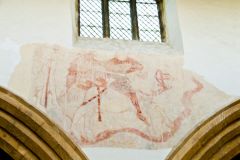 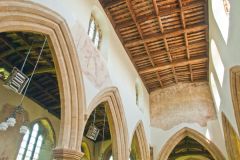 More self catering near Nassington

More bed and breakfasts near Nassington