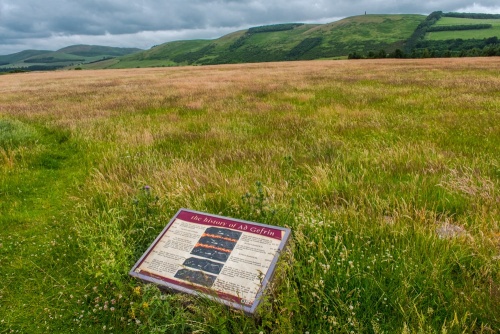 Ad Gefrin is one of the most important archaeological sites in early medieval Britain, yet it is one that few members of the public are aware of. There has been a settlement here on the valley floor under the shadow of Yeavering Bell since the Bronze Age, about 5,000 years ago.

The real importance of Ad Gefrin began in the 6th century when the newly-established Anglo-Saxon kings of Northumbria built a royal residence here. The royal family did not have a central seat of power, but rather the kings established royal halls in several locations throughout their territory and moved from one to the other, administering justice and receiving tribute from the local area.

Ad Gefrin was one of these regional administrative centres, a place where the royal court would live for a period before moving on to the next royal settlement. For over 100 years Ad Gefrin was the focal point for important historical events.

In the 7th century, Bishop Paulinus preached to the king and queen of Northumbria at their hall in Ad Gefrin. His visit is recorded by the Venerable Bede in his 'History of the English Church and People', where Bede says Paulinus preached for 36 days and baptised his converts in the nearby River Glen. 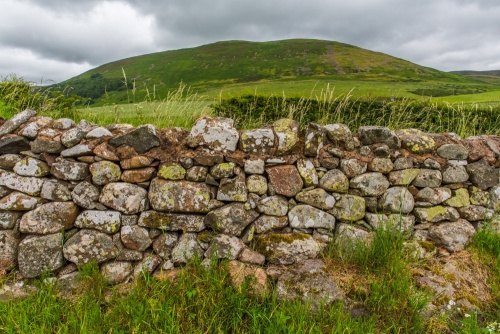 The view to Yeavering Bell

Bede goes on to say that Ad Gefrin was deserted by later kings in favour of a new residence at nearby Milfield called Maelmin.

Before Maelmin, however, ad Gefrin was home to some of the most famous Northumbrian rulers such as Aethelfrith, Edwin and Oswald, who was later canonised as St Oswald.

The palace was attacked and destroyed by Cadwallon, King of the Britons, and again by King Penda of Mercia. By the 8th century AD, Gefrin was no more, and for over a thousand years the site was lost. It was only rediscovered in 1949 when aerial photography revealed the outlines of 6th-century buildings. 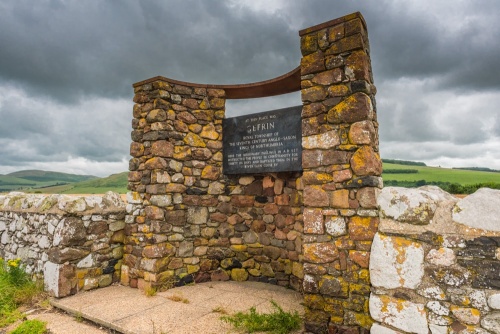 AD 580 - the first settlement at Yeavering takes shape, with rectangular huts and a large timber enclosure at the eastern end of the site. This takes place during the reign of the Anglo-Saxon King Ida. Ida's capital was at Bamburgh, on the coast.

AD 600 - Ida's grandson Aethelfrith (reigned 593-616) extends his territory. The settlement is now a royal township with residences suitable for the monarch and his court. A tiered seating area is built with seats for 150 people.

AD 627 - Aethelfrith is followed by King Edwin and Queen Aethelburgha, a Kentish princess who brings with her a Christian bishop named Paulinus. Paulinus converts large numbers of Northumbrians to Christianity. At Ad Gefrin the tiered seating area is expanded to accommodate 320 people. This is the high point of Ad Gerfin's development.

AD 633 - The southern kings Cadwallon of Wales and Penda of Mercia attack Northumbria. The settlement at Ad Gefrin is destroyed by fire.

AD 640 - King Oswald (634-642) extends Northumbrian territory north to the Firth of Forth. The settlement is rebuilt, with a large cemetery and a church.

AD 655 - Oswald's brother Oswy takes the Northumbrian throne. Ad Gefrin is rebuilt but on a much smaller scale. The few buildings that remain are eventually abandoned and left to decay.

An ancient record suggests that King Arthur’s first battle took place at the mouth of the River Glen. Unfortunately, there are two River Glens; one here in Northumberland and one in Lincolnshire. Which one is 'King Arthur's river?

If it is the Northumberland version then the mouth of the river is just a stone's throw from Ad Gefrin. Could the legend of King Arthur be a folk memory of the 7th-century battles here that destroyed Ad Gefrin? 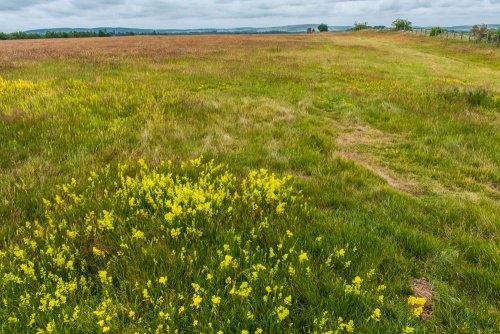 Looking west across the royal township

There is no easy way to park if you are westbound, from Wooler. We had to drive past the site and turn around at the next junction, then retrace our route eastward to the layby.

There is a large memorial with several very useful information panels. A trail takes you along the field boundary to some of the most important locations, with more information panels to help you understand the layout of the site and its historical significance.

There is very little to see above ground, which is not surprising when you consider that Ad Gefrin lay hidden from view for over 1300 years and was only rediscovered with the aid of aerial photography.

It is still a fascinating site, especially when you realise how close it is to the ancient hillfort of Yeavering Bell on the hilltop above. This has obviously been a place of great importance for many thousands of years.