The church of St Mary the Virgin is located in an idyllic village setting, the churchyard path shaded by an avenue of a dozen large lime trees, one for each apostle. From a distance, the yellow-orange coloured stone of the Norman tower draws your eye, but as you approach the church entrance it is hard not to be distracted by an elaborate memorial inside an iron fence.

The memorial is that of a wealthy 18th-century property owner named James Sansom, erected by his widow after his death in 1750. The memorial looks like an extravagant church steeple, or a rocket preparing for lift-off.

Once you drag your eyes away from the Sansom memorial you realise what a pretty building St Mary's is; with obvious Norman stonework in the tower. On the south tower all is a medieval sundial, and on the west face is an even older dial that may be Saxon.

The top of the tower is in a different style to the rest; this is because at some point in the later Middle Ages the tower was raised 10 feet so the sound of the bells could be heard more clearly in the nearby hamlets of Compton Scorpion and Stoke.

Over the porch entrance you can see the Montfort coat of arms. Simon de Montfort, leader of the Second Baron's War against Henry III, was once the patron of Ilmington church. The doorway arch is Norman, with traditional dogtooth carving. Over the arch is a canopied niche in Decorated Gothic style, and set into the larger Norman arch is a smaller Tudor arch. So here in one doorway you have three periods of architecture, spanning 4 centuries. 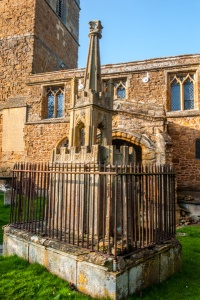 Inside the church your attention is immediately drawn to the 14th-century font, with its rather peculiar series of stepped layers of carving, rather like an inverted wedding cake. There are deeply splayed Norman windows on either side of the nave. These would have provided the only light to the nave, so it must have been a relief when the clerestory was added in the early 14th century.

There are low arches of what appear to be sedilia on both sides of the chancel, suggesting that the floor level was once much lower than it is now.

There are memorial to former rectors on the chancel walls, including an amusing one to Rev E Golding, whose epitaph says that his 'performance of the duties of his office fell far short of their obligation and importance'. Quite a damning indictment, though the church guidebook suggests that he wrote the epitaph himself, so maybe it was an attempt at self-deprecation.

Much more interesting historically is a series of memorials on the east wall of the north transept to members of the Brent family. Two small brass plates bearing the Brent wyvern (winged dragon) flank the tablets.

There are further brases to the Palmer family of Compton Scorpion. One tablet commemorates Sir Nicholas Overbury, father of the popular poet, Sir Thomas Overbury. Overbury was caught up in court intrigue during the reign of James I. He was sent to the Tower of London and mysteriously poisoned.

The beautifully carved 20th-century pews, pulpit, lectern, and doors are the work of Robert Thompson of Kilburn, known as 'The Mouse Man'. There are 11 Thompson 'signature' mice scattered amongst the woodwork. Perhaps the easiest to spot is on the north face of the pulpit, at the base. 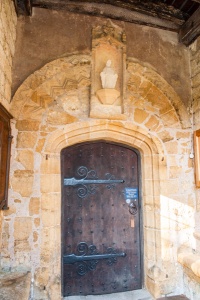 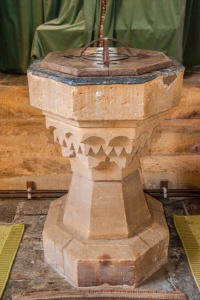 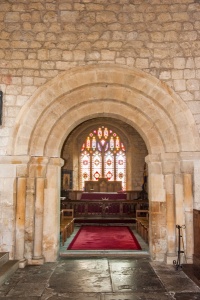 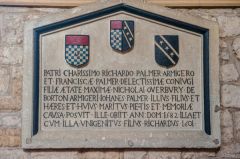 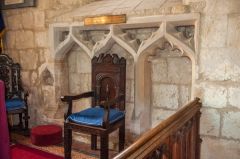 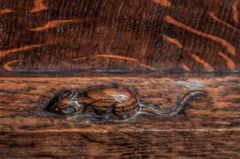 More self catering near Ilmington

More bed and breakfasts near Ilmington