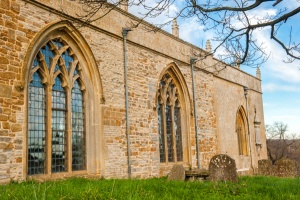 Trees hide the large parish of Preston on Stour from the pretty cottages that ring the village green. You can just make out the bulk of the building through a tunnel of yew branches that line the steep path to the church.

As you come closer you can see that the south wall of the nave is pierced with very large, almost oversized, windows in a style that seems rather at odds with the obviously earlier stonework around them.

The earliest recorded mention of a church at Preston comes from 1272, when St Mary's is mentioned as belonging to the priory at Deerhurst. In 1504 the church passed to Tewkesbury Abbey, on condition that the abbey pay for a vicarage, though it seems this never happened.

In the late 15th century a west tower was added, but the really important date in the history of Preston's church is 1753, for it was then that James West of Alscot Park called in the architect Edward Woodward of Chipping Campden to began rebuilding the medieval church in an entirely new style.

The result is one of the earliest, and finest, examples of Gothic Revival architecture in England. The chancel was rebuilt in 1753-4 in a peculiar mix of Gothic styles that borrowed heavily from 14th and 15th-century church builders. The east window is in 14th-century style, the north and south windows in Perpendicular Gothic of the following century. 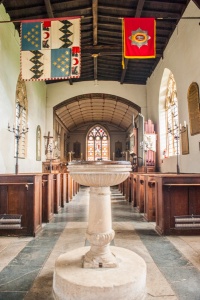 The 18th c font and nave

In 1756 the main entrance was created in the west face of the tower, and in 1757 the north wall of the nave was rebuilt, though the earlier 15th-century timber roof of the nave was left intact. Look for the moulded and painted rosettes that decorate the cross-beams.

At the same time a west gallery was added, where today you can see a Stuart (1603-88) royal coat of arms. In the gallery hang four hatchments for the West family, spanning the years 1799-1882.

James West seems to have been a collector of stained glass, for there is heraldic 15th century English glass in the tower window, 17th-century pieces in both the east and west windows, and fabulous 17th-century Dutch glass in the chancel, brought here from Evesham Abbey. This glass is remarkable for its pure, rich colours. Look for small heads on the sides of the main panels, and the writhing figure of a serpent in the north-east chancel window.

The chancel is also worth exploring for its collection of extremely nice 18th-19th century memorials to members of the West and Mariett families. James West is represented on the north wall, opposite a wonderful monument to his brother-in-law, Thoma Stevens, whose epitaph tells us that 'His genius in its first opening was quick and lively', but 'the fairest Blossoms of future Excellence were by a weak Constitution soon blasted'. 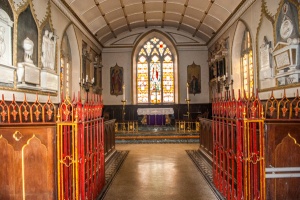 These memorials pale by comparison to an ornate painted and gilded memorial on the south-east wall to Sir Nicholas Kempe (d. 1624). The Kempe memorial may have been brought here from St Mary's chapel in Islington by James West.

The monument shows Kempe in armour, kneeling in an atitude of prayer between his two wives, flanked by Corinthian columns supporting heraldic symbols. This is 17th century monumental sculpture at its finest, a testament to family pride and self-importance.

One other point of note about the chancel is the arch itself, which is decorated on its underside with colourful painted patterns, and there are small memorial plaques running up the curve of the arch. This is, to the best of my recollection, the only time I've seen a chancel arch used for memorials. At the base of the arch are painted iron gates, which add a colourful touch to what is a very intriguing chancel.

At the west end of the nave, almost in the shadow of the west gallery is a delicate 18th-century font on a slender pedestal.

St Mary's is a remarkable church; though the Gothic Revival style would soon become ubiquitous throughout England - particularly in the early-mid 19th century - in 1753 it was an almost new concept, and here at Preston-on-Stour you see the Gothic ideals beginning to flower. A very enjoyable church in an extremely pretty village. 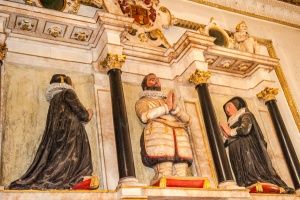 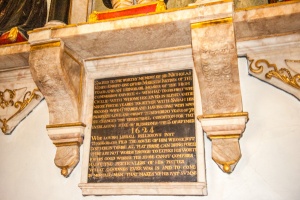 Inscription plaque on the Kempe memorial 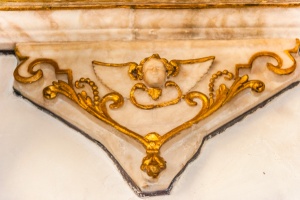 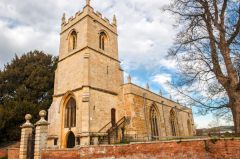 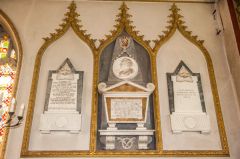 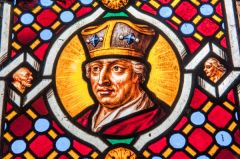 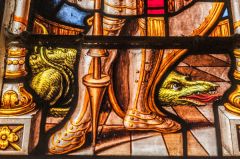 Nearest Accommodation to Preston on Stour:

More self catering near Preston on Stour

More Hotels near Preston on Stour

More bed and breakfasts near Preston on Stour