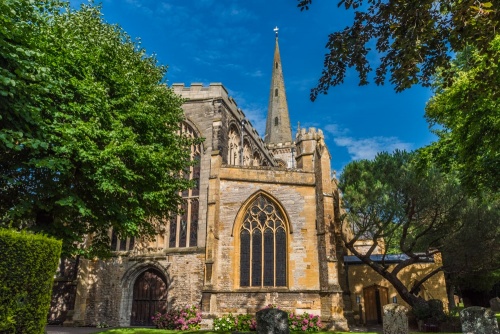 William Shakespeare is buried in Holy Trinity church, and visitors can view not only his grave but the parish registers that recorded his birth and his death. Apart from its association with Shakespeare the church is well worth a visit, containing as it does architectural features that date back to the early 13th century. 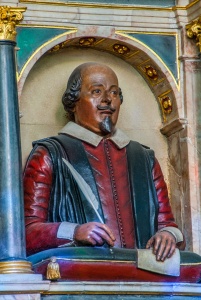 Look for the 26 medieval misericords in the choir stalls. These misericords, or 'mercy seats' are fancifully decorated with carvings of mermaids and mermen, unicorns, and scenes of daily life.

Holy Trinity is possibly the most heavily visited parish church in the UK. It is located in a lovely location on the banks of the River Avon, a short walk from most of the major Shakespeare sites in the town centre.

A Saxon church existed in Stratford as early as the 9th century, but no trace remains of this early wooden building. The Normans replaced the Saxon building with a stone structure, and this itself was rebuilt in 1210. It is this building that forms the core of the Holy Trinity we can visit today. An avenue of lime trees said to represent the 12 tribes of Israel and the 12 apostles leads to the church.

The original 13th-century church was narrower and much shorter than the present building. The Guild of the Holy Cross (see Shakespeare's Schoolroom & Guildhall) provided funds to lengthen the nave and add north and south aisles. 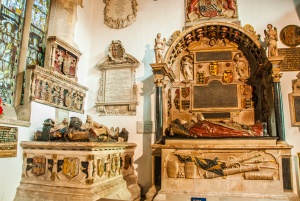 The interior features The Clopton Chapel, an ornately decorated chapel named after Sir Hugh Clopton (1440-1496), a native of Stratford who rose to become Lord Mayor of London (1491-2). Clopton never forgot his roots and provided funds to pay for Clopton Bridge, which still bears traffic over the Avon in the centre of Stratford. He also built New Place, which later became William Shakespeare's retirement home.

Clopton had an ornate tomb built for himself in the Lady Chapel of Holy Trinity, but he was actually buried in London. This did not stop his descendants from claiming the Lady Chapel as their own chantry chapel, and it has since been referred to as The Clopton Chapel. Here you will find one of the most ornate and expansive (and no doubt expensive) memorials in any parish church in Britain. This is the memorial to Sir John Carew (d.1628), and his wife, Joan Clopton.

I mentioned the misericords previously; these are truly worth examining. They depict a range of religious figures, plus beasts, both real and mythical, as well as scenes from daily life, including one vignette of a domestic dispute between a man and a woman.

And then we come to the Sanctuary; the real reason most people visit Holy Trinity. For here is the tomb of William Shakespeare. But why, you might well ask, is Shakespeare buried here, and not in Westminster Abbey, or some other Nationally important place? Is it because Stratford was justifiably proud of their native son?

The answer is no, but to find the real reason, you have to go back in history, to the 14th century. In 1331 the Bishop of Winchester founded a chantry at Holy Trinity for a 'College' of 5 priests. In 1451 the College was confirmed in a grant by Henry VI, and Holy Trinity became what is called a 'Collegiate Church' (i.e. administered by a 'college' of canons). 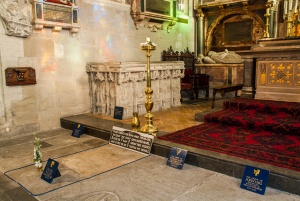 The College of canons were supported by tithes; money donated to the church. When the College was dissolved by Henry VIII during the English Reformation, the right to collect the tithes was sold off. The person assuming those rights had to provide for a priest as well as pay for the upkeep of the chancel.

After Shakespeare retired to Stratford, he purchased part shares in the tithe privileges. Thus, he had a share in both the revenues and the administrative duties of the church. It is for this reason that Shakespeare is granted the privilege of being buried in the sanctuary of Holy Trinity.

The 15th-century south porch features a sanctuary knocker. If an accused criminal managed to reach this knocker before he was apprehended, he could claim the right of sanctuary within the church and thus avoid prosecution for a period of 37 days.

Holy Trinity Church is well signposted around central Stratford. It is approximately 15 minutes from Shakespeare's Birthplace on foot and within a stone's throw of Hall's Croft, where Shakespeare's daughter Susanna lived with her husband Dr John Hall. 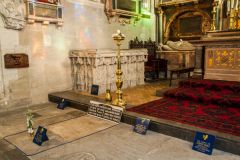 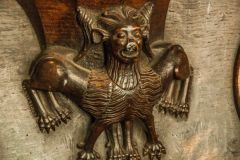 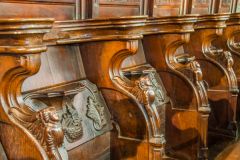