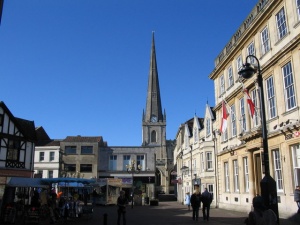 Trowbridge is the county town of Wiltshire, with a history as a centre of the woollen cloth industry. The origins of the town go back to at least the Saxon age; the name comes from the Saxon words treow-brycg, meaning tree-bridge. We know that weaving took place here as much as 1,000 years ago, as Anglo-Saxon loom weights have been found.

Though there was a settlement here on the River Biss before the coming of the Normans, it was only after the Norman Conquest that Trowbridge began to gain importance. A Norman nobleman named Humphrey I de Bohun built a castle here in the very early 12th century, and his great-grandson, Henry de Bohun, erected the church of St James, obtained a market charter from King John in the year 1200, and laid out the market place.

This is the earliest recorded royal market charter in Wiltshire and among the oldest in England. De Bohun may have been grateful, but if so, it did not last, for he was among the most active barons who forced John to accept the Magna Carta in 1215. 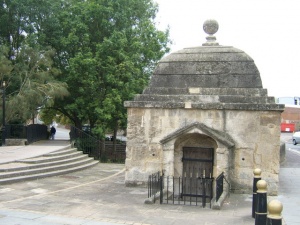 In the 14th century, the weaving industry began to grow, bringing prosperity to the town, and throughout the medieval period Trowbridge gained a reputation for high-quality cloth. This reputation meant that in later years royals from across Europe sought out Trowbridge cloth for special orders.

In 1747 Elizabeth, Empress of Russia sent an agent to Trowbridge to order 'plump cloths and good full colours'. Daniel Defoe recorded that Trowbridge was famed for 'The finest medley Spanish cloths, not in England but in the whole world...'.

Many of the weavers built cottages clustered around the river and the town centre, but it was really in the Industrial Revolution that the townscape of Trowbridge changed drastically. The advent of new mechanised methods for making cloth made Trowbridge 'The Manchester of the West', and brought wealth to a generation of mill owners.

The town centre is full of 18th-century buildings erected by wealthy clothiers. Architectural historian Nikolaus Pevsner famously described the town centre as a 'row of palaces'. Some of those palatial 18th-century exteriors are facades covering earlier 16th-17th century houses. 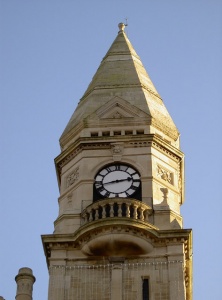 The legacy of Trowbridge's industrial and social heritage can be explored in the Trowbridge Museum, which traces the history of the town and its industrial past. One of the prize exhibits in the museum is an original Spinning Jenny', the invention that, more than any other, helped launch the textile industry that fueld the Industrial Revolution.

Isaac Pitman's name may sound familiar; he was the inventor of the Pitman method of shorthand, used to take notes quickly. Pitman was born in Trowbridge in 1813, and the trail follows in his footsteps around his native town.

More self catering near Trowbridge

More bed and breakfasts near Trowbridge