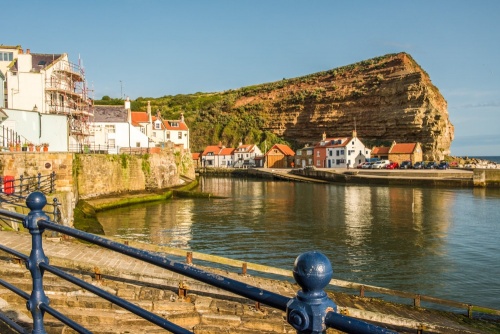 Staithes is a picturesque fishing port on the Yorkshire coast, north of Whitby. It has a history going back to at least the Viking era, and its name comes from the Old English word for a landing place (though locals pronounce it like 'Steers' to the bewilderment of tourists).

The village did not develop until the 15th century, and then only as a landing place for a small village called Seaton Garth, located further inland where the uphill part of Staithes is now. By the Tudor period Staithes had developed an active shellfishing industry. Over the following two centuries, the fishery developed until by the early 19th century Staithes was the largest fishing port north of The Wash.

It was also a busy shipping centre for locally quarried alum, which was used as a fixing agent for dyeing cotton cloth. 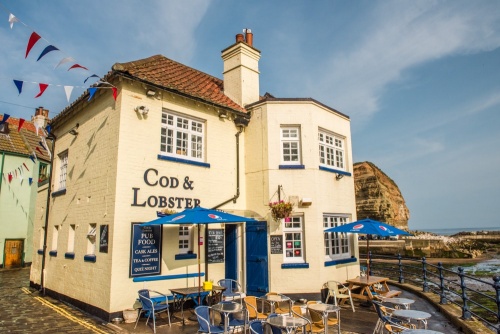 The popular Cod and Lobster Inn

Staithes had an active fishing fleet, with over 80 fishermen using the harbour, making Staithes one of the largest ports on the Yorkshire coast. The fishermen used a distinctive boat known locally as a coble, with a high bow and a flat bottom.

This shape allowed the fishermen to easily land and launch from shallow, sandy beaches found along the Yorkshire coastline. The high bow also helped protect them from high waves on the North Sea.

The men of Staithes gained a reputation for seamanship. They had to be good sailors to survive the often treacherous North Sea conditions. Unfortunately, that skill made them a target for press-gangs. These gangs of men could legally abduct people and force them to join the Royal Navy. Many Staithes fishermen suffered this fate, and a large number of pressed men of Staithes died at the Battle of Trafalgar.

Others ended up in America after Commodore John Paul Jones kidnapped a large number of Staithes sailors in 1779 and brought them back to the US. 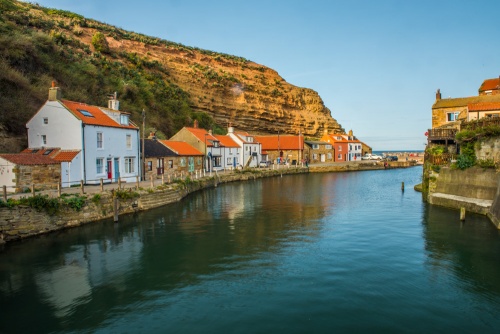 The women of Staithes wore a distinctive bonnet that protected them whilst they balanced heavily laden baskets of fish on their heads. The bonnets were padded on top and had a flap at the back to protect the neck from water running off the basket.

The women were considered very graceful as they had to stand extremely straight and tall and maintain their posture to carry the fish baskets. You can see examples of traditional Staithes Bonnets at the Heritage Centre on High Street.

The days of Staithe's fishing glory are long past. Now only a small collection of cobles offload their catch in Staithes. The village is still an active port, but now the boats are mostly pleasure craft.

Just north of Staithes is the Boulby Potash mine, one of the deepest in Britain. 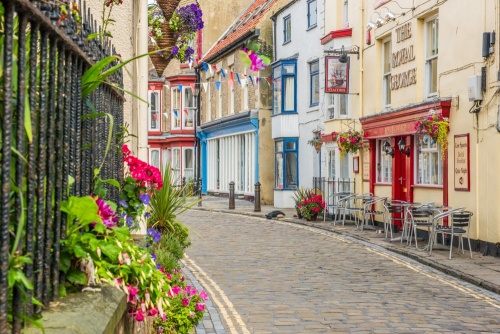 High Street and the Royal George

Staithes is perhaps best-known for its links with Captain Cook. The young James Cook came to Staithes in 1745 at the age of 16 to apprentice to a grocer and chandler named William Sanderson.

The apprenticeship did not last long; Cook fell in love with the sea and pined to become a sailor. Sanderson introduced him to a friend named John Walker, a Quaker shipowner living in Whitby. Walker agreed to take Cook on as an apprentice, and he moved to Whitby.

From there he joined the Royal Navy and became famous for his voyages of discovery to Australia, New Zealand, and Hawaii.

The Sanderson shop where Cook worked was destroyed by a storm in 1745. Parts of the shop were incorporated into a new building known as Captain Cook's Cottage at the harbourside end of Church Street. 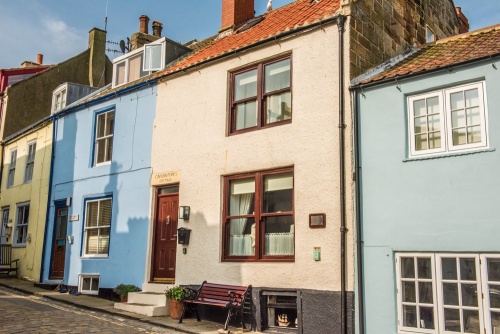 The natural beauty of the coastline around Staithes made it a popular place for painters. When the railway arrived in the late Victorian period Staithes became a popular destination due to its cobbled lanes and picturesque cottages. Around 1880 a group of artists gathered here and became known as the Staithes Group.

For 30 years the Staithes Group lived and worked in the area. Over decades the Group's style evolved from realism to impressionism, and in the process, their works became highly prized by galleries and collectors.

Perhaps the most famous member of the Staithes Group was Dame Laura Knight, who met and married fellow artist Harold Knight here in 1897. The couple later moved south to become part of the Newlyn School of artists in Cornwall. 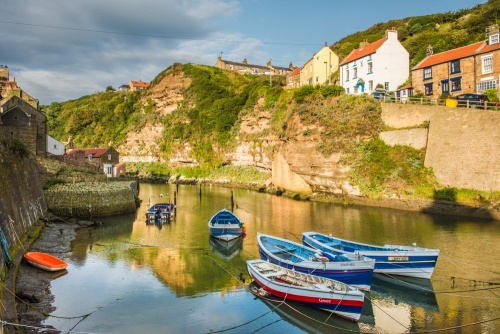 Occupying the historic Primitive Methodist Chapel on High Street is the Captain Cook and Staithes Heritage Centre, where you can learn about the village's rich maritime history and its connection to Captain Cook. The Heritage Centre has a wonderful collection of old photographs and drawings of Staithes, local costumes and a wealth of information on the local fishing industry.

The upper floor is bursting with artefacts connected with Captain Cook and his voyages of discovery. There is also a gift shop with locally-made arts and crafts. The Chapel was built in 1880 and is listed Grade II for its historic interest. 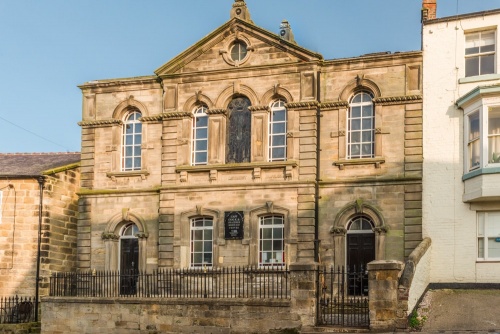 Staithes is full of picturesque cottages and narrow, cobbled lanes. There are none narrower than Dog Loup, a mere 18 inches wide at its narrowest point. Dog Loup is thought to be the narrowest street in the north of England, and perhaps in all of Britain - but that depends on how you define a 'street'. Parliament Street in Exeter is 25 inches at its narrowest point, and has the benefit of being named 'Street', whereas Dog Loup, though narrower, is called ... well ... a 'loup'.

There are several extremely good inns near the harbour. Probably the most popular is the Cod and Lobster, perched right on the waterfront. In fact, the inn is so close to the water that parts of the building have been washed away over the centuries, and in windy weather you are advised to enter via the door on the landward side to avoid getting wet! On High Street is the Royal George, a traditional inn built in the late 18th century. 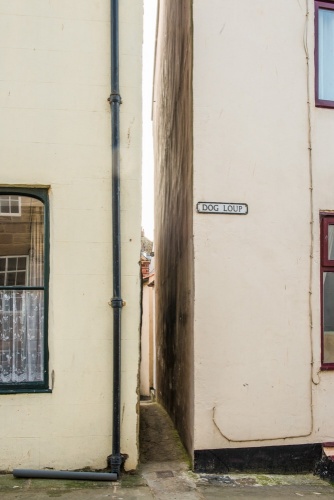 Dog Loup, the narrowest street
in the north of England

Staithes is off the A174 between Whitby and Loftus. Do not even think about driving down the steep, cobbled lanes to the harbour! There is a large visitor car park at the top of the cliffs. From there you have to walk down the cobbled lanes to the harbour. It is a steep climb down and a rather intimidating climb back up to the car park, but it is well worth the effort to explore what must be one of the prettiest coastal villages in England.

Our family had the pleasure of staying in an old fisherman's cottage near the harbour for a wonderful week in summer. It was amazing to be able to walk around the harbour and explore the picturesque cobbled lanes as the sun went down on a long summer evening. Robin Hood's Bay may be more famous but Staithes is every bit as enjoyable to explore and is well worth a special trip to see. 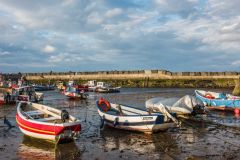 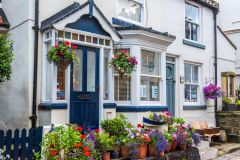 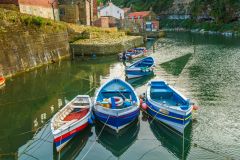 About Staithes
Address: A174, Staithes, North York Moors, Yorkshire, England
Attraction Type: Village
Location: off the A174 between Whitby and Loftus. There is a large pay and display parking area just off the A road.
Website: Staithes
Location map
OS: NZ782188
Photo Credit: David Ross and Britain Express

More self catering near Staithes

The Endeavour Restaurant With Rooms - 0.1 miles
Staithes, Yorkshire
From: £65.00

More bed and breakfasts near Staithes

Self Catering near Staithes