This coast stretches from the north shore of the River Taw near Braunton to the border of Exmoor National Park just past Ilfracombe. In contrast to the rugged Atlantic coast of the Hartland Point area just a few miles to the south, North Devon's coastline is one of long, sandy beaches. Woolacombe beach has been named one of the 10 best in the world, but this also means the area can be very crowded in summer.

If you'd like a bit more peace and quiet, the Braunton Burrows Nature Reserve contains over 1000 acres of sand dunes stretching inland from the coast. The town of Braunton (it claims to be the largest village in Britain) houses a Countryside Centre, and nearby Braunton Great Field preserves one of the few remaining examples of medieval open-field farming technique.

The largest centre along the coast is the town of Ilfracombe. The largely Victorian port prides itself on its floral displays, and it has won numerous "Britain in Bloom" awards. The Victorian heritage of Ilfracombe's architecture is emphasized every year in a Victorian Celebration, held in mid June.

Near Ilfracombe are the unique Tunnels Beaches, secluded bathing areas accessed by tunnels cut beneath the cliffs. Boats from Ilfracombe and Barnstaple ferry visitors to Lundy Island for excellent bird and wildlife viewing (see below). 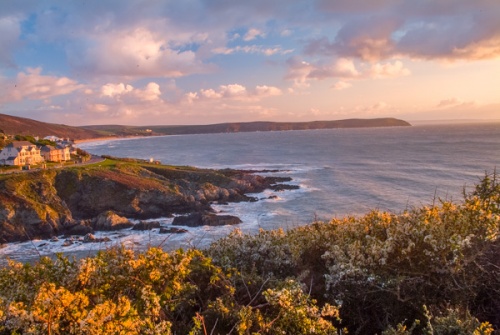 Hartland Heritage Coast
This is a 60-mile long coast of startling, rugged cliffs pounded by the Atlantic waves which make the area so popular with surfers. There are sandy bathing beaches in the south, and in the north, past Hartland Point, lies the picturesque village of Clovelly, with a High Street so steep that donkeys carry visitors to the harbour and back. More ...

Lundy Island and Heritage Coast
The name "Lundy" derives from Norse for "Puffin Island", and the little islet off the coast of Devon is known as a bird habitat, and as Britain's only Marine Nature Reserve. More ...