This heritage coast stretches from Pentire Point, just north of the holiday port of Padstow, to the popular bathing beach at Widemouth Bay, near Bude.

At Pentire Point, the views along the rock-strewn coast are magnificent and in summer the clifftops are abundant in sea campion and thrift blooms. The jagged cliffs continue north to Tintagel, where the remains of a 14th century castle cling to the headland.

Tintagel, of course, is home to numerous legends of King Arthur and Tintagel Castle has been touted as a possible site of Camelot. Whether the legends have any truth in them is open to debate, but the castle itself presents an incredibly romantic picture with the Atlantic waves crashing against the nearby rocks.

Just up the coast from Tintagel is the tiny harbour of Boscastle, built to export slate from the huge Delabole Quarries. Further north still is High Cliff, at 700 feet the ... well ... highest cliff in Britain. Thomas Hardy enjoyed walking here and the abundance of inland tracks and trails allow modern visitors to follow in his footsteps.

Crackington Haven, surrounded by magnificent green-clad cliffs. The scenery along this stretch of coast is truly wonderful, and the walking along the cliffs is excellent. The National Trust owns most of the coastal land and surrounding farms. 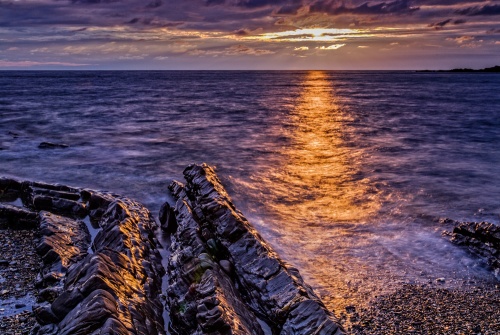 Hartland Heritage Coast
This is a 60-mile long coast of startling, rugged cliffs pounded by the Atlantic waves which make the area so popular with surfers. There are sandy bathing beaches in the south, and in the north, past Hartland Point, lies the picturesque village of Clovelly, with a High Street so steep that donkeys carry visitors to the harbour and back. More ...