This heritage coast reaches 33 miles from just south of Penzance, around Land's End, to the resort town of St. Ives on the Atlantic coast of Cornwall.

The sheltered south coast of the Penwith region gives it a mild climate which is perfect for plant cultivation, and the Penzance area boasts several nationally recognized gardens.

The area is also rich in Cornish legend; the Giant Myen du was said to live at Maen Castle near Land's End, and the faerie folk called Coopers banged stones together to warn inhabitants of St. Ives that rich shoals of fish were approaching. At Zennor, a mermaid lured the local squire's son to his death, and legend says that her alluring song can still be heard if you listen carefully.

Numerous prehistoric monuments line the coast, including The Merry Maidens Stone Circle and Tregiffian Bronze Age grave, near Lamorna, and Carn Gluze at St. Just. Many more ancient sites can be found by journeying inland a few miles, including Lanyon Quoit and Men an Tol holed stone. Local legend has it that if you climb through the hole at Men an Tol nine times against the setting sun, all your injuries will be cured.

St Just is well situated as a base for exploring the heritage coast and Land's End Peninsula. Cape Cornwall, just a 10-minute walk to the northwest of the town, is the only "cape" in all of England. In the summer months, there are guided walks around St Just focussing on natural history, early archaeology, and industrial archaeology. 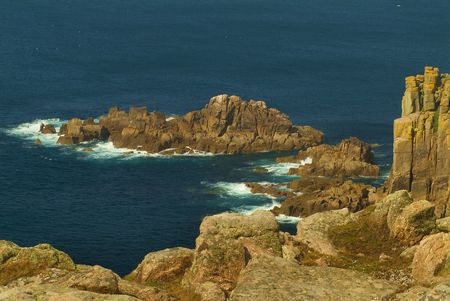 Watch for signs of old shipwrecks along the coast; they, along with the engine houses of long silent mines that dot the peninsula, are tangible reminders of Cornwall's heritage. Near Land's End you can still view the remains of the vessel, City of Cardiff.

At the Minack Open Air Theatre on the cliffs near Porthcurno you can watch plays in what must surely be the most evocative setting for theatre anywhere in Britain. A white pyramid on the cliffs just past the theatre marks the spot where the first transatlantic cable reached England in 1880. A short walk to nearby Treryn Dinas is rewarded with views of an Iron Age fort.

South West Coast Path
Easily the longest and, in places, the most arduous, of England's National Trails. The path is actually the amalgamation of 4 paths; the Somerset & North Devon, Cornwall, South Devon, and Dorset Coastal paths. The route is quite popular, and it can be crowded in the summer months, though there are always long stretches where your only company will be a chorus of sea birds. More ...

The Lizard Heritage Coast
The Heritage Coast stretches from Porthleven to Enys Head, just past Lizard, the most southerly point of mainland England, and it possesses the warmest climate in Britain. The Lizard Peninsula is a place of gentle heath and coastal grassland, and takes in several coastal nature trails as well as the long-distance South West Coast Path. More ...