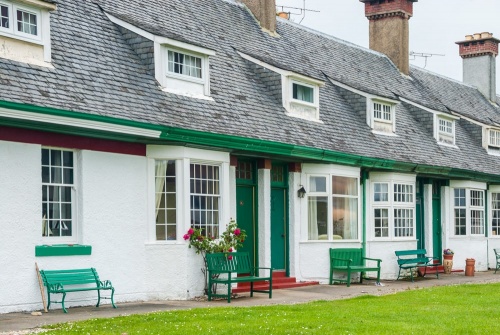 Lamlash is the largest village on Arran and a popular centre for visitors. It sits on the eastern shore of the island between Brodick to the north and Whiting Bay to the south, looking over Lamlash Bay to Holy Isle.

The village hosts many of Arran's most important facilities, such as government offices, a hospital, a police station, and a high school. It is also a major boating centre, with pleasure craft of all sorts sheltering in the Bay. The popularity of Lamlash as a boating centre explains the presence of the RNLI Lifeboat station.

On the seafront is Hamilton Terrace; two terraces of identical cottages, built in 1895 to house workers on the 10th Duke of Hamilton's estate. Most of the cottages are now holiday cottages. 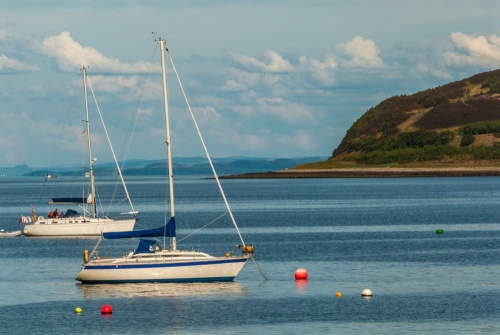 On a small green near the cottages is a memorial to 86 crofters moved from Glen Sannox during the Clearances. The crofters took ship from Lamlash to Canada on 25 April 1829 and the memorial was erected in 1977. The land they had occupied was populated with deer herds for stalking, then a popular pursuit amongst the upper classes.

At low tide, you can see the remains of a small harbour built in the 17th century by Anne, 3rd Duchess of Hamilton (1631-1716). Her intention was to foster salt and coal mining on the island, but it proved too expensive to maintain. Stones from the harbour were used to build many of the houses we see today.

The Arran Coastal Way long-distance path runs through the village. 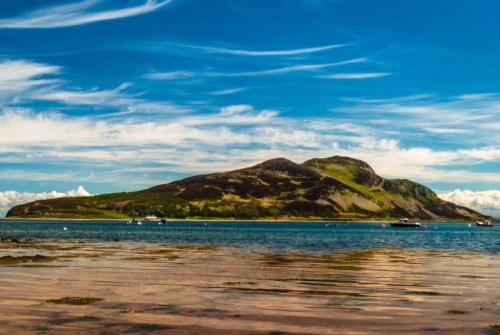 Sometime around AD 585 St Molois, or Molaise (AD 566-640), a disciple of St Columba, settled in a cave on Holy Isle, just offshore in Lamlash Bay. The original name of Holy Isle was Inis Shroin, which translates from the Gaelic as 'Island of the Water Spirit.' After St Molaise, the island was called Molaise's Island, then finally in the early years of the 19th century the name changed again to Holy Isle.

St Molaise was the son of an Irish king and a Scottish princess. He was offered his father's throne, but he turned it down in favour of the simple life of a religious hermit. It is possible that Holy Isle was already considered a sacred place when Molaise settled here.

After living for a decade on Holy Isle, St Molaise later travelled to Rome where he was ordained by Pope Gregory the Great. He served as the Abbot of Leighlin in Ireland and was later raised to Bishop.

St Molaise's cave is on the western shore of Holy Isle. The cave interior is carved with crosses and Norse runes, including the name of Vigleikr, a Norse marshall who fought under King Haakon of Norway at the Battle of Largs in 1263. The Norse fleet is known to have sheltered in Lamlash Bay before the battle. Near the cave is The Healing Well, whose waters are traditionally thought to have healing properties.

Near the north end of the island are the remains of an early medieval monastery, possibly dating to the 13th century.

The island is now owned by the Centre for World Peace and Health, a Tibetan Buddhist centre that runs regular courses for visitors. Regular ferries run between Lamlash and Holy Isle during the summer months. 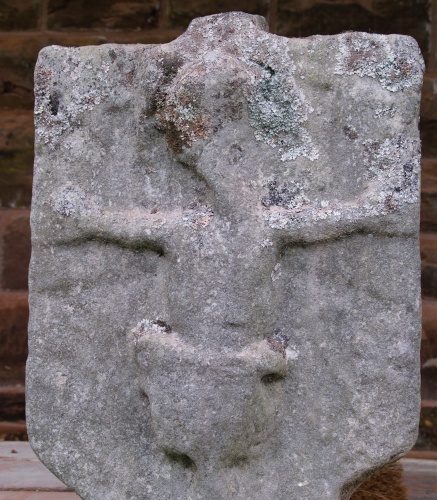 This striking Gothic church was built in 1886 by the Duke of Hamilton to replace an earlier building of 1773. The church features a campanile tower; a tower independent of the church body. This type of design is common on the European continent but rare in the UK. The church windows feature hand-painted stained glass from European cathedrals.

In the church grounds are two medieval relics rescued from the monastery on Holy Isle. The first is a freestanding cross with a figure of Christ in relief, and the other is the roughly carved basin of a font.

Just off Margnaheglish Road in the north of Lamlash stands Kilmory Church, built in 1880 on the foundations of an earlier building erected in 1785, itself standing on the site of a medieval church. Unlike the larger church in Lamlash, Kilmory Church has no tower, just a single bellcote over the west gable. The oldest gravestone in the churchyard dates to 1706.

Near the golf course in Kilmory, close to Kilmory Church, stand the roofless ruins of a medieval chapel, dating to sometime in the 14th century. King James IV of Scotland attended a service here in 1498. Built into the exterior of the east wall is a stone carved with the date 1618, thought to have been given by the Marquis of Hamilton, who served as the chapel patron.

Immediately east of the A841 between Lamlash and Brodick is a small stone circle. The circle is at grid reference NS0188733416, near a car park at the summit of the hill. There are six stones, all of them small and well worn. It may take some searching to find in summer when ferns hide the stones from view even though they are very close to the road.

Nearby accommodation is calculated 'as the crow flies' from Lamlash. 'Nearest' may involve a long drive up and down glens or, if you are near the coast, may include a ferry ride! Please check the property map to make sure the location is right for you.

More self catering near Lamlash, Arran