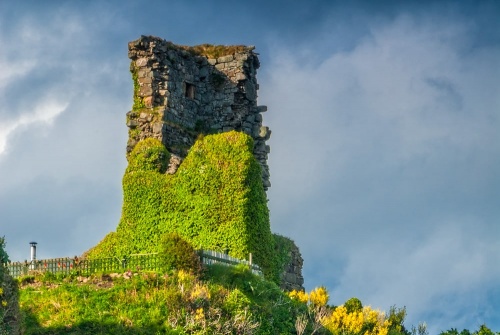 Standing above a rocky foreshore looking towards the Sound of Pladda, on the southeastern tip of Arran, is Kildonan Castle, a 13th-century fortress built by the MacDonald Lords of the Isles to guard the approaches to the Firth of Clyde. It was allowed to fall into ruin in the 16th century.

Kildonan Castle was built in the period following the collapse of the Norse control of western Scotland after the Battle of Largs in 1263. With the defeat of the Norse, control of Arran was contested between the Stewarts and the MacDonalds.

The name of both the castle and the village comes from St Donan, a 7th-century Irish missionary who introduced Christianity to the Pictish kingdoms in northeastern Scotland. According to tradition, Donan was buried at Kildonan after his martyrdom in AD 617, when a Pictish queen had the missionary and 150 of his followers burnt.

The MacDonalds built the castle, possibly incorporating part of an earlier structure. The site has natural defences, being protected on the north by a ravine and on the east by a small cliff. Below the rocky foreshore is a sandy beach, one of only a few on Arran. This beach would have offered shelter for trading vessels.

Sometime before 1406 Kildonan Castle passed into royal control, for in that year King Robert III granted the castle to his illegitimate son, John Stewart of Ardgowan. It seems likely that the Stewart monarchs used the castle as a fortified hunting lodge rather than for any defensive purpose.

In 1544 the ownership passed to James Hamilton, Earl of Arran. In 1558 the English under the Earl of Sussex sacked and burned the castle.

The Earl of Arran did not attempt to rebuild it, for he had other, more impressive properties on Arran, most notably Brodick Castle, further north. He and his descendants let Kildonan fall into decay, and now all that remains is a roofless, ivy-clad ruin. 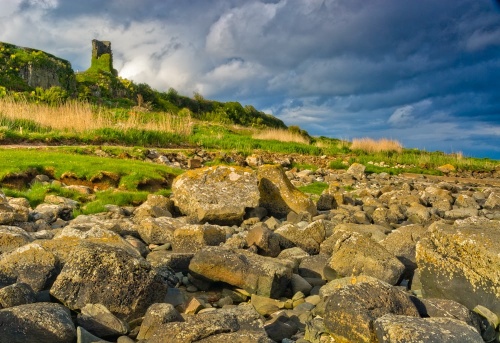 Kildonan Castle from the foreshore

Though it is called a castle, in construction Kildonan Castle has more in common with a fortified tower house. The remains we see today consist of a roofless tower, vaulted at ground-floor level, with a pair of gun loops.

According to an investigation in 1924 there was a ground-floor entrance and a wheel stair in the north-east angle. No trace of the stair or the entrance now remains.

Kildonan Castle stands on private land, with no public access. However, a footpath runs next to the property, and there is an information panel beside the path. The best views, however, are from the rocky shore and the beach beyond it, reached from a parking area in Kildonan village.

There are four parking areas on the minor road that loops through Kildonan. Any of them will do, but the easiest is the easternmost one, located just before the road heads north, away from the shore. Follow the Arran Coastal Way long-distance trail as it heads for the beach, then turns to follow the shore north and east. You will see the castle ahead on a rocky shelf above the foreshore.

Access is very easy, and while you are in Kildonan see if you can spot one of the local seals, often to be found basking on the rocks just offshore. The castle also offers excellent views towards the lighthouse on Pladda and the unmistakable conical island of Ailsa Craig.

Nearby accommodation is calculated 'as the crow flies' from Kildonan Castle, Arran. 'Nearest' may involve a long drive up and down glens or, if you are near the coast, may include a ferry ride! Please check the property map to make sure the location is right for you.