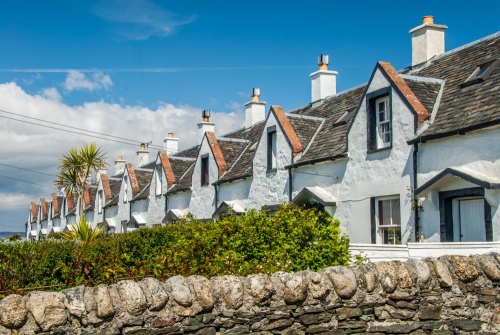 Catacol is a picturesque hamlet just south of Lochranza, in the northwestern corner of Arran. Its name come from Old Norse and translates loosely as 'gully of the cat'. This is thought to refer to wildcats that were once native to the area.

The village lies near the mouth of Abhainn Mor, a river flowing down from the heights of Glen Catacol. Between the village and the bay is a stretch of beautiful sandy beach that makes Catacol a magnet for visitors.

The most famous landmark in Catacol is a row of terraced 19th-century cottages known as The Twelve Apostles. The 'Apostles' were built in the 1860s to accommodate people cleared from land in the island's interior so that the land could be used for deer stalking, then a popular activity amongst the upper classes.

The new residents of the terraced cottages were supposed to earn their living by fishing. To make this easier, each cottage had a first-floor window of a different shape. In theory, the woman of the house would light a candle to signal to her husband, fishing in Kilbrannan Sound (the western arm of the Firth of Clyde), and then would know which cottage was signalling by the shape of the window outlined by the candlelight. 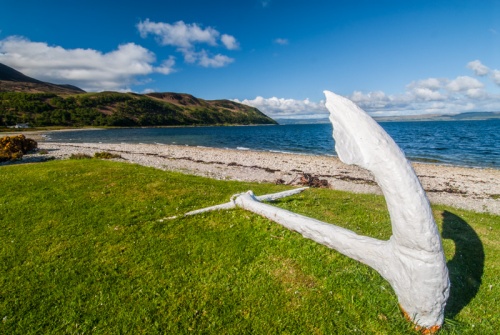 The reality, however, was quite different. Many of the people cleared from their land refused to live in The Twelve Apostles, and moved elsewhere on Arran in protest at being evicted. Most of the cottages stood empty, and the terrace became known locally as 'hungry row'.

Now, most of the dwellings are used as holiday cottages, and are very popular due to the superb views westward over the sandy beach towards Kintyre. The location is perfect for watching spectacular sunsets.

The village is known in botanical circles as the only place on earth where the Catacol Whitebeam grows. This oddity of plant life is a hybrid of the rowan and whitebeam trees. Only two known examples are thought to exist.

North of Catacol, on the road to Lochranza, is the Sailor's Grave, a stone memorial that marks the final resting place of a sailor who died of cholera at sea. When his ship put ashore and asked to bury the sailor's body in Catacol, the locals refused because they were afraid the corpse might bring cholera with it. For the full story, see our article on Lochranza. 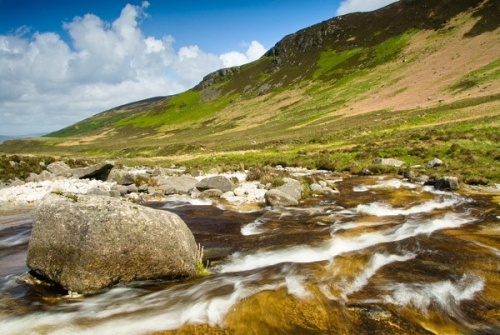 On the Glen Catacol walk

Immediately south of the village is the mouth of Abhainn Mor. On the south side of the bridge is a parking area, and a trail leads from the parking area, beside the river, before branching into two separate trails. The western trail follows Glen Catacol and terminates just before Loch Tannam a long mountain loch.

The eastern trail follows Glen Diomhan, past several striking waterfalls, before looping around the peak of Beinn Bhreac and descending Glen Easan Biorach to emerge in Lochranza, near the distillery.

Our family has taken the first half of this walk and really enjoyed it. The scenery is spectacular, and the waterfalls, though not large, are well worth a country walk to see. 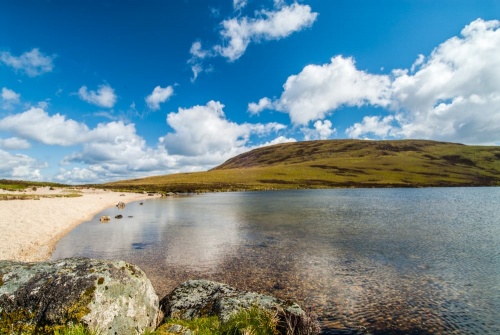 A little further south of Catacol is another excellent walk, following a signposted footpath from Mid Thundergay to Coire Fhionn Lochan, a stunning mountain loch between the summits of Meall Biorach and Meall Bhig. This time there is no loop to the trail; you just have to walk up the glen to the loch and then walk back down the glen to the shore again. 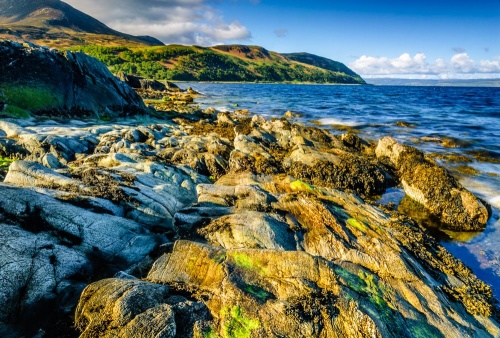 Catacol is just south of Lochranza on the C147 minor road to Machrie. There is a parking area at the head of the Glen Catacol walk, but no dedicated parking area in the village itself. That said, we had no trouble parking in the village, even at the height of the tourist season.

Two miles to the north of Catacol is the Lochranza Ferry, linking Arran to the mainland, and beyond that is Lochranza village, known for its 13th-century castle and the Arran Distillery, makers of a popular single-malt whisky.

Nearby accommodation is calculated 'as the crow flies' from Catacol. 'Nearest' may involve a long drive up and down glens or, if you are near the coast, may include a ferry ride! Please check the property map to make sure the location is right for you.

More self catering near Catacol, Arran