The Cuillin Hills, Isle of Skye 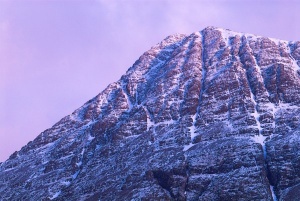 The Cuillin Hills are counted among the most spectacular peaks in Scotland. Whether you come to Skye to climb the Cuillins or just to admire them from a safe distance, you cannot escape their presence! There are two Cuillin ranges, each with a distinct character. The Red Cuiillins are formed of red granite, and rounded and gentle in appearance. 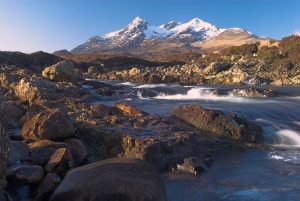 Sligachan is perfectly located as a centre for exploring both the Red and Black Cuillins. The little community is really no more than the famous Sligachan Hotel, a campground, and a backpacker's hostel, but the superb location makes it a popular hub for outdoor activities.

Marked trails lead south along the Sligachan River into the heart of the Black Cuillins, or veer southwesterly towards Glen Brittle. The Sligachan Hotel website gives more details of accommodation in the area. 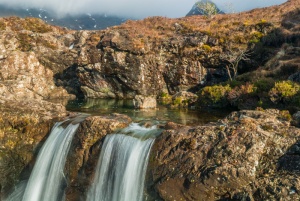 Glen Brittle is located roughly halfway between Sligachan and the fishing village of Glenbrittle on the coast. The minor road to Glenbrittle passes through a forestry plantation and drops down to the valley bottom. There is a parking area to the right of the road, and a waymarked trail opposite the car park.

Allt Coir a' Mhadaidh tumbles down from the slopes of the Cuillins across the valley, snaking its way towards you, then veering south down Glen Brittle. The views to Sgur a Ghreadaidh and the Cuillins can be breathtaking, especially if you come in the evening when the sunset can be spectacular.

You have several choices if you fancy a walk; take the left fork on the footpath opposite the car park for a walk of about 5 miles to Sligachan, or the right fork to follow the course of Allt Coir a' Mhadaidh to the magical Fairy Pools (see below). The walk should only take 10-15 minutes, and the going is easy, but you will have to cross several small burns via stepping stones, so good waterproof footwear is advised.

For longer walks, take the path south to the sandy beach at Glenbrittle - a distance of roughly 10 miles - or carry on past the Fairy Pools into Coir na Creich, where the last clan battle was fought in 1601, and climb into the Cuillins themselves. 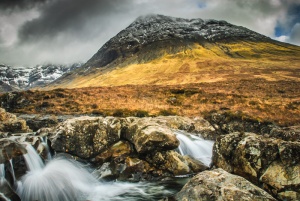 The Fairy Pools are a series of clear, cold pools and waterfalls formed as Allt Coir' a' Mhadaidh tumbles down from the foothills of the Black Cuillins into Glen Brittle. Park at the Forestry car park and follow the signposted path opposite the parking area.

To reach the pools take the right fork on the path after a hundred yards or so, and follow the trail for about 10 minutes to where the ground rises in a small plateau. The location of the Pools beneath the looming bulk of the Cuillins is wonderful, and the drama of the waterfalls and the sinuous beauty of the rock formations carved by the falling water give the Fairy Pools a magical feel.