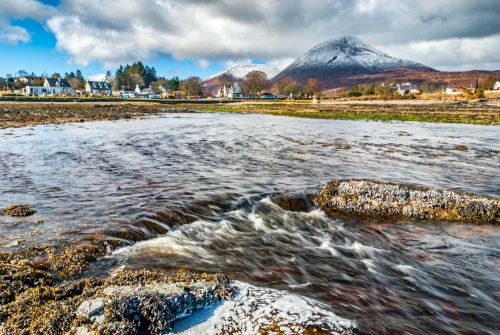 Broadford is the second-largest village on the Isle of Skye (after Portree) and a popular holiday base for visitors exploring the island. The settlement grew up around the curve of Broadford Bay, under the shadow of Beinn na Caillich (the hill of the old woman).

The village name comes from the norse 'Breioafjoror'. meaning a wide bay. The more modern Gaelic version of the name is An t-Ath Leathann, which literally means a broad river crossing.

The settlement began as a small hamlet with houses on either bank of the Broadford River where it empties into the bay. Over time, the settlement grew to include other hamlets along the sweep of the bay, which linked together to create the village we see today.

Today, Broadford is over 1.5 miles long and stretches along the south and west sides of the bay. There are two piers; one at the eastern end of the village and the second, larger pier, at Corry, near the hospital.

Broadford is geared towards the tourist trade, with craft shops, artist's studios, and shops selling traditional woollen and knitted goods. There is a wide selection of restaurants, pubs, accommodation options from hotels and B&Bs to camping and hostelling as well as a bank, supermarket, garage, petrol station, and hospital.

Broadford is a popular centre for walkers, with nearby trails leading into the Red Cuillins and beyond. If you are less energetic you'll enjoy looking for fossils along the shore. 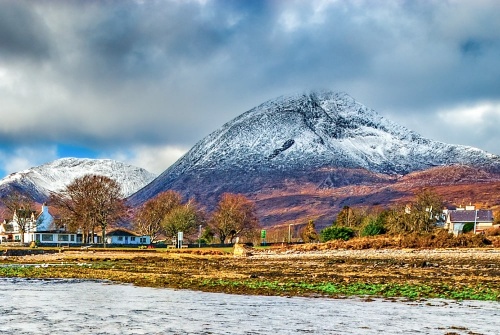 Broadford served as a cattle market as early as the 18th century. Its central location made it a busy centre for trade, particularly after Thomas Telford's new road between Portree and Kyleakin was completed in the early 19th century.

In the late Victorian period, Broadford was the centre of a thriving trade in marble, which was quarried at the base of Beinn na Caillich and brought to the pier at Broadford by the Skye Marble Railway. The quarry closed in 1914.

Broadford has another claim to fame in the world of geology, for it was here that the mineral harkerite (a form of borate) was first identified. The mineral is named for Alfred Harker, a geologist with the Geological Survey of Scotland.

Broadford will forever be remembered as the birthplace of Drambuie, which was invented here under circumstances that are a mix of myth and fact. Let's start with a fact; the name Drambuie comes from the Gaelic 'dram buidheach', which means simply, 'The drink that satisfies'. It is a whisky-based liqueur made with heather honey, herbs, and spices.

Now the myth; in 1746 Bonnie Prince Charlie was on the run after his defeat at Culloden. He sought refuge with Captain John MacKinnon on Skye. In gratitude for MacKinnon's help, the prince gave him his drink recipe.

Unfortunately, the story was likely invented to boost Drambuie sales.

We do know that the MacKinnons later gave the recipe to John Ross, who ran the Broadford Hotel. Ross and his son James perfected the recipe and began serving it to hotel customers. The rest, as they say, is history. 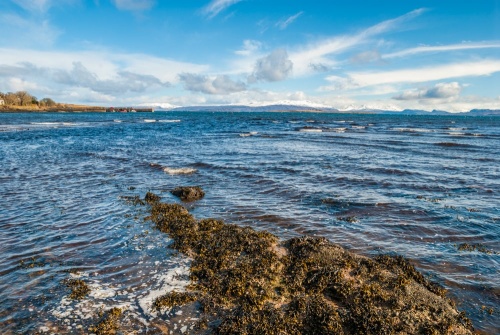 Broadford is approximately 7 miles west of the Skye Bridge on the A850, making it easily accessible from the Scottish mainland. The A851, linking Broadford to the Sleat Peninsula, begins just east of the village. At the western edge of Broadford is the turnoff for the B8083, which winds around Loch Slappin to the picturesque fishing village of Elgol.

Nearby accommodation is calculated 'as the crow flies' from Broadford. 'Nearest' may involve a long drive up and down glens or, if you are near the coast, may include a ferry ride! Please check the property map to make sure the location is right for you.

More self catering near Broadford, Skye