HERITAGE HIGHLIGHTS:   Site of a bloody clan battle in 1601 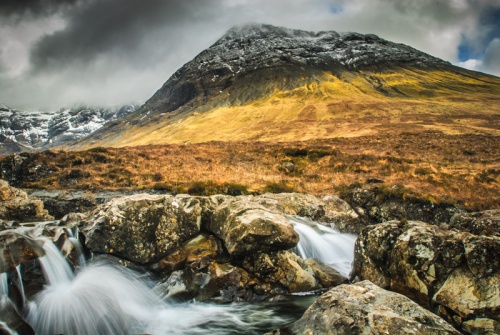 The Fairy Pools is a series of picturesque waterfalls and crystal clear pools in the heart of scenic Glen Brittle, in the western foothills of the Black Cuillins. The Pools are a popular wild swimming location, and offer stunning views of the Cuillin Hills.

The Pools lie on Allt Coir a Mhadaidh, a tributary of the River Brittle. The river runs roughly north to south, down the centre of the glen, and is overlooked by the Black Cuillins to the east. Many of the burns that feed the river feature attractive waterfalls and pools, but none more striking than the Fairy Pools.

Where are the Fairies?

Despite the name, I've never heard any stories linking the Pools to faerie folk. This is Skye, however, so tales of faeries are never far away! The Fairy Pools are, however, linked to tales of selkies. 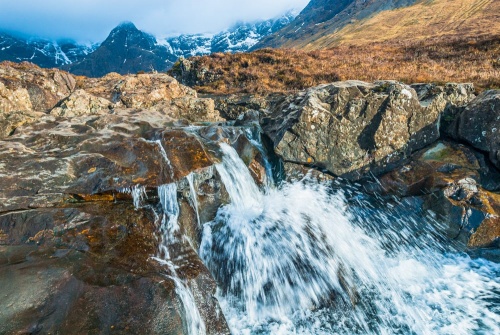 These legendary water creatures disguised themselves as seals during the day, but at night they came ashore at Glenbrittle beach where they shed their seal skins. Then in human form, they would bathe in the Fairy Pools under the magical glow of a full moon.

The area around the Fairy Pools is home to a wide variety of animal and bird life. Here you will see sheep, red deer, and rabbits, along with gulls, ravens, and crows. 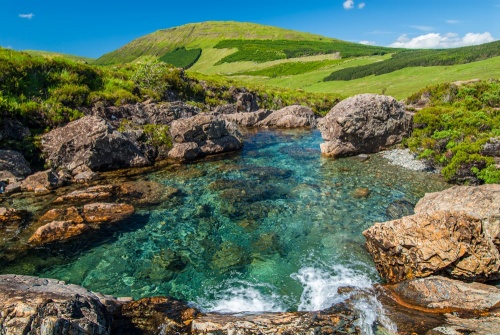 They may look peaceful today, but the Fairy Pools were the site of a bloody clan battle between the MacDonalds of Sleat and the Macleods of Dunvegan in 1601. The conflict, known as the Battle of Coire na Creiche (or the Battle of Benquhillan), resulted in a victory for the MacDonalds. So fierce was the fighting, however, that the Fairy Pools were said to have run red with blood.

The feuding between the Macleods and MacDonalds prompted King James VI to intervene. He forced both clan leaders to release their captives and surrender to royal authority. The king's intervention effectively ended the long years of feuding between the two clans and the end of hostilities was celebrated with three weeks of feasting at the Macleod stronghold of Dunvegan Castle. 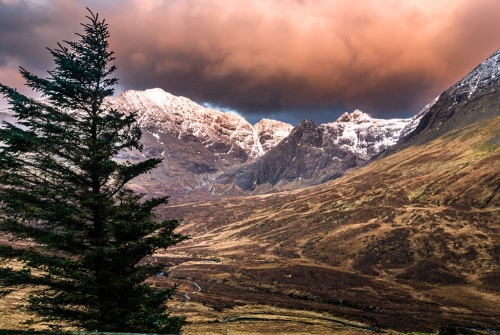 Sunset over Glen Brittle and the Fairy Pools

To reach the Fairy Pools, take the B8809 west towards Carbost and turn off at Merkadale onto the single-track road signposted Glenbrittle. The road passes through Glen Brittle Forest, with forestry plantations on both sides, before emerging at the northern end of Glen Brittle. Immediately after passing the last plantation stand on your left, you come to a car park on your right.

The start of the trail to the Fairy Pools is immediately across the road from the car park. The trail forks shortly after it begins. Take the right fork, which follows the course of Allt Coir a Mhadaidh.

The trail hugs the left bank of the burn, with the bulk of SgÃ¹rr an Fheadain looming in the distance. The path rises here and becomes rougher. 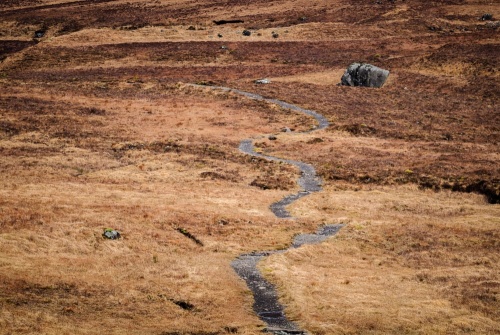 The trail to the Fairy Pools

Be aware that there is a charge for parking. The money raised goes towards maintaining the car park and the trail to the Pools. The most recent addition to visitor facilities at the car park is a toilet block, scheduled to open in 2021. There are also public toilets at the Glenbrittle Campsite Cafe, at the mouth of the glen.

It is roughly a 20-minute walk from the car park to the first of the Fairy Pools (so, 40 minutes return). The trail, though well-maintained, can be muddy after rains. It is always a good idea to wear good waterproof walking boots and bring a rain jacket. 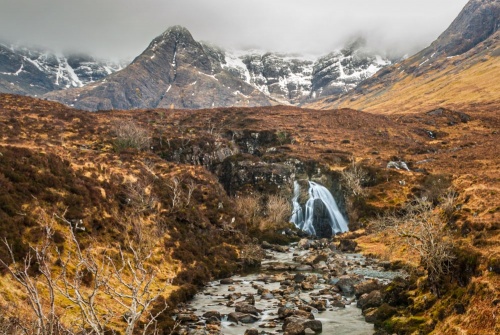 A Fairy Pools waterfall with the Cuillins beyond

The first waterfall is the largest and most impressive, but it is worth going further on to see more of the cascades and pools. The second pool features an underwater arch and is perhaps the most popular one for wild swimming.

If you do plan on swimming in the Fairy Pools, be forewarned; the water is fed by mountain streams and, as a result, is very cold. So cold, in fact, that some visitors bring wetsuits.

Plan on sharing the Fairy Pools with other visitors. The Pools are one of Skye's most popular visitor attractions, drawing upwards of 1,000 people per day at busy times. The large number of visitors has turned the Pools from a relatively secluded and little-known natural site into a target for group tours and a must-see destination for tourists.

As a result, the location can seem overcrowded at the height of the visitor season. To get the most out of a visit, we strongly suggest arriving early or late in the day. Do yourself a favour and avoid bank holiday weekends! 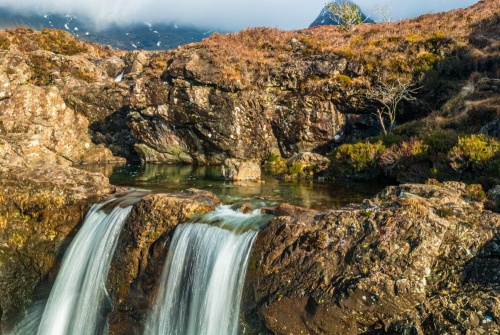 The car park is owned by the Minginish Community Hall Association (MCHA) and managed by the Outdoor Access Trust for Scotland (OATS). OATS are also responsible for maintaining the trail to another of Skye's most popular visitor attractions, The Old Man of Storr rock needle.

Most visitors simply walk to the Fairy Pools, take a few pictures, turn around, and come back the way they came. as an alternative, you can extend your visit into a circular walk that returns beside the forestry plantation, or extend it even further by taking the trail north to Sligachan.

Nearby accommodation is calculated 'as the crow flies' from Fairy Pools. 'Nearest' may involve a long drive up and down glens or, if you are near the coast, may include a ferry ride! Please check the property map to make sure the location is right for you.