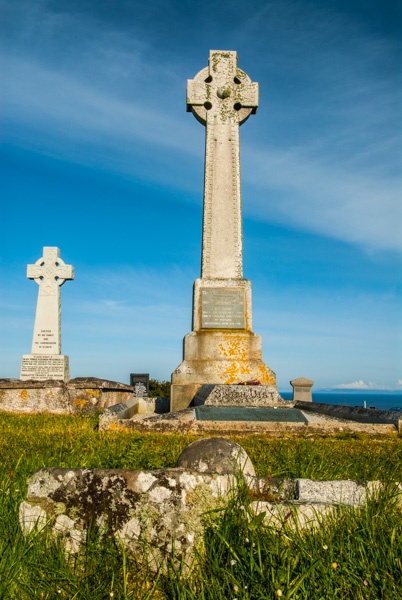 Don't look for the township of Kilmuir on a map; you won't find it, yet this scattered area of hamlets and crofts on the north-west coast of Skye's Trotternish Peninsula has a long and rich history. A 16th-century church once stood on a rise of ground, looking west towards the distant Isle of Lewis. The church is gone now, but the burial ground remains, and within it are a wealth of historic graves and monuments, among them the striking memorial to the Jacobite heroine, Flora MacDonald. 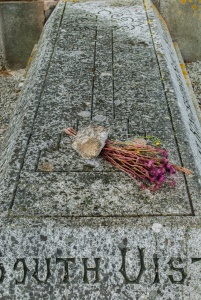 Flora Macdonald was born at Milton, on South Uist, where you can still see the ruins of her childhood home. She grew up in the household of the chief of the Macdonalds of Clanranald, who firmly supported the Jacobite cause.

When Bonnie Prince Charlie escaped following the Battle of Culloden in 1746 he went into hiding, depending on supporters to shelter him and hide him from his Hanoverian pursuers led by the Duke of Cumberland. At length, he arrived on the island of Benbecula, where it was decided that he should move on to Skye.

The island was under travel restrictions, and the prince could not take the risk of being spotted. A Jacobite supporter and distant kinsman named Captain Conn O'Neill asked Flora to help Charles escape. Macdonald herself did not support the Jacobite cause, but she was moved by the plight of the Jacobites after the Battle of Culloden, and at length, she agreed. She later said that she acted from charity, and would have helped the Duke of Cumberland had she found him in a similar situation.

She obtained permission from Hugh Macdonald, commander of the local militia and her stepfather, to leave Benbecula. She was allowed to take two servants, and a crew of six sailors. Bonnie Prince Charlie was dressed as an Irish spinning maid named Betty Burke, and in that guise he sailed with Flora to Skye on 27 June 1746. 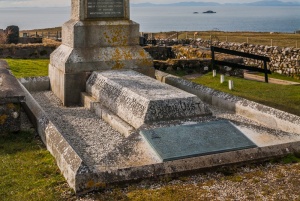 The base of Flora Macdonald's memorial

Unlike the scene made famous in the popular 'Skye Boat Song', the Prince did not leave baffled foes standing on the shore, and managed to make the crossing unchallenged. From Skye, he made his way at length to Moidart, where he boarded a French ship and escaped to refuge in Europe.

When Flora Macdonald's role in the escape came to light she was arrested and imprisoned in the Tower of London. Though she had committed treason by helping Bonnie Prince Charlie, the public, even staunch Hanoverians, regarded her as a heroic figure, primarily because she was a woman.

She was released from the Tower in 1747. She married Allan Macdonald of Kingsburgh in 1750 and settled at Flodigarry on Skye, where she raised a family. In 1774 the couple and their 5 children emigrated to North Carolina. Her husband Alexander joined a regiment of Royal Highland Emigrants in the American War of Independence, where he was captured. He was released in an exchange of prisoners and took up a command in Nova Scotia.

In 1779 Macdonald returned to Scotland, braving an attack by privateers on the way, and settled on Skye where her husband joined her after the war was over. She died in at Kingsburgh in 1790 and was buried in the graveyard beside the 16th-century church at Kilmuir. Tradition says that she was buried in a shroud made from a bed-sheet used by Bonnie Prince Charlie. 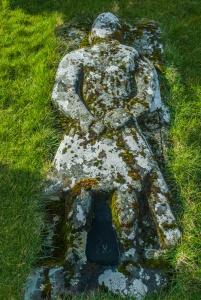 Given her popularity as a Jacobite heroine, it is not surprising that a large memorial was erected by her grave, which became a popular destination for tourists. The original monument to Macdonald was destroyed in a gale in 1871. It was replaced by a new memorial designed by Alexander Ross in 1880. Ross's design includes a 28 foot high Celtic Cross of granite, rising above a slender rectangular chest tomb, also of granite. A marble plaque was added in 1922.

The epitaph reads, 'Her name will be mentioned in history and if courage and fidelity be virtues, mentioned with honour'. It was written by Dr Samuel Johnson of dictionary fame, who met her during his famous tour of the Hebrides with James Boswell.

In 1884, just four years after the monument was erected, the Skye Boat Song was published, and the popular ballad ensured that Macdonald's fame would not fade.

There is much more to see at Kilmuir Cemetery than Flora Macdonald's memorial. Perhaps the most interesting historic feature is the Maclean Burial Enclosure, notable for the date 1793 on the lintel. Look for the gravestone to Dr John MacLean. Perhaps the most interesting grave marker is a late medieval effigy of Angus Martin, or 'Angus of the Wind', The nickname came from his habit of going to sea no matter what the weather. Martin is said to have married a Danish princess. 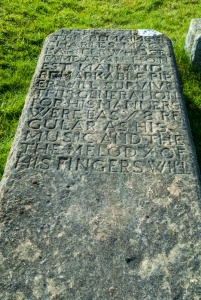 Grave of Charles MacArthur,
the last piper of
the Macdonalds of Duntulm

The cemetery is also the burial place of the MacArthurs, pipers for the MacDonalds of Duntulm. Look for the grave slab to Charles MacArthur, the last hereditary piper. The epitaph is unfinished, supposedly because MacArthur's son, who was paying for the work, drowned before it was completed and the mason stopped work.

It is easy to find Kilmuir cemetery. Just take the A855 up the north-west coast of the Trotternish Peninsula, past Uig, and keep heading north. Between Kilvaxter and Duntulm a minor road turns right and you will see signs for the Skye Museum of Island Life. Just past the museum you can see the cemetery. It is always open, and it is very easy to spot Macdonald's grave; just head for the large Celtic cross.

One of the most memorable things about Flora Macdonald's grave was seeing a bouquet of flowers laid on the memorial. Even after several centuries, people still come to Kilmuir to pay their respects to this brave woman. 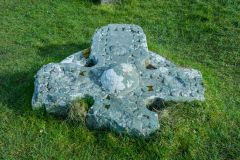 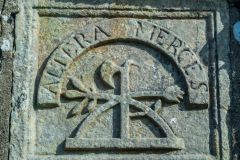 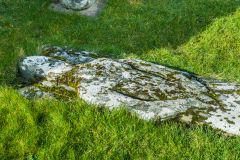 Nearby accommodation is calculated 'as the crow flies' from Flora MacDonald's Grave & Kilmuir Cemetery. 'Nearest' may involve a long drive up and down glens or, if you are near the coast, may include a ferry ride! Please check the property map to make sure the location is right for you.