Broadford and Strathaird, Isle of Skye 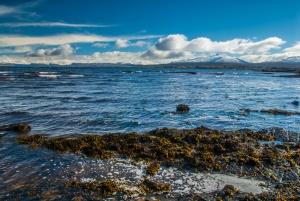 Broadford is the second largest settlement on Skye, (Portree is the largest). The location is excellent for exploring the Red Cuillins and eastern Skye. There are several stores catering to outdoor recreation and a wide selection of accommodation. To the south of Bradford lies the Strathaird peninsula, and the fishing village of Elgol, famous for its views to the Cuillin Hills and fabulous sunsets.

A short walk from Elgol brings you to Prince Charlie's Cave, where Bonnie Prince Charlie hid from the English. Or walk south from the ruined church at Cill Chriosd to find the remains of clearance villages at Boreraig and Suisnish.

To the east of Broadford is Kyleakin, the gateway to Skye, where the Skye Bridge crosses to Kyle of Lochalsh on the mainland. The ruins of Castle Moil stand in Kyleakin harbour, and a short drive away is Kylerhea otter sanctuary, where you can watch for sea otters from hides along the shore. 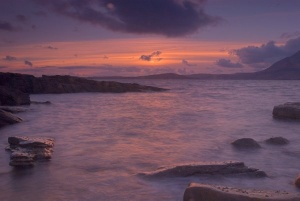 Take the winding road south from Broadford, through Torrin, along the shores of Loch Slapin to the fishing village of Elgol. The location is superb, with views across Loch Scavaig to the spectacular Black Cuillins. Regular boat trips leave from Elgol pier to travel across Loch Scavaig to Loch Coruisk, a sea loch in the very heart of the Cuillin peaks.

Some trips allow the option of spending time ashore, scrambling onto the foothills of the Cuillins or exploring the shore of Loch Coruisk. Elgol beach has some fascinating rock formations, and the limestone cliffs are etched in a honeycomb pattern. But don't leave before the sun goes down; Elgol is famous for its sunsets, which spread a golden glow over the Cuillins. 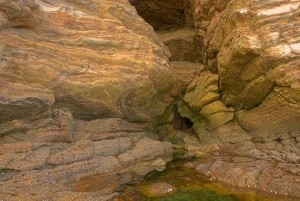 In a hidden cave just south of Elgol, Bonnie Prince Charlie hid from the English who pursued him. From the harbour at Elgol climb up onto the headland and walk south across the peat and heather (wear waterproof footwear!) to Port an Luig Mhor (Port of the Big Hollow), where the high cliffs suddenly drop down to the shore. Walk back along the beach in the direction you have just come, and you will see vertical slits in the undercut cliffs.

You will pass a through-cave, an arched passage through the rocks, but carry on until you reach the second-last slit in the cliff face. The cave mouth is well hidden behind a tumble of rocks, but if you scramble up, and duck past some dripping water, you will find the narrow opening of the cave.

It is hard to imagine that in this spot the unfortunate prince's supporters held a feast for him on his final night on Skye. The geology of this bit of coast is fascinating, and well worth the half-hour walk from Elgol.

NOTE: Be sure to check locally on the state of the tides, as the cave is only accessible at low tide, and you don't want to be stranded! 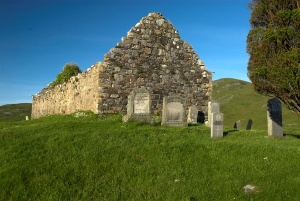 Just south of Broadford is Cill Chriosd, or ‘Christ’s Church’, the roofless ruins of a 16th-century church that once served as the parish church of Strath. In 1840 a new church was built in Broadford, and Cill Chriosd was abandoned. Nearby is the small hillock where, legend tells us, the 7th century Saint Maelrubha held a mass for the locals. The name of the hill, Cnoc na-Aifhreann, translates as ‘the hill of the mass’, a reminder of the area’s long history.

The area around Cill Chriosd was once famous for the quarries which dug Skye marble. This white stone was highly thought of for its beauty, but unfortunately, it was difficult to extract and was thus more costly than Italian Carrara marble. Mining eventually ceased here in 1939, and the ruins of mine buildings can still be seen. 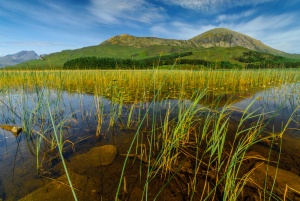 Just south of the ruined church at Cill Chriosd lies shallow, reed-filled Loch Cill Chriosd. Several local legends attach to the loch. The story was told that an evil spirit dwelt in the loch, and this spirit poisoned the waters so that anyone bathing in the loch or drinking the water would die. St Columba chased the spirit away, but another spirit took up residence there.

Ths water spirit was an each uisge, or water horse. The spirit would appear in the guise of a handsome young man and seduce passing women, who would then be dragged off into the deepest part of the loch to die. One day the horse mistook a priest in his long robes for a young woman. The priest managed to convert the horse to Christianity and the loch was safe at last.

To the north of the loch, the land rises gently until at last it reaches the conical peak of Beinn na Caillich.

If you park at Cill Chriosd and strike south past the disused mine buildings at Ben Suardal you will come at length to the deserted villages of Suisnish and Boreraig, on the shores of Loch Eishort. Nothing remains beyond the foundation walls of the houses to remind us of the hardships suffered here. For these meagre stone walls are a reminder of one of the blackest chapters in Scottish history, the Highland Clearances, when the inhabitants of these and countless other settlements throughout Scotland, were forced to leave their homes.

The story of Suisnish is similar to so many other villages in the Highlands; in 1853 the factor for Lord MacDonald evicted 32 families from the village, so the land could be used for sheep grazing, which would bring in far more money.

The villagers refused to leave at first, and spent the winter in barns before they finally were forced to admit defeat and leave in the following summer. The factor had the gall to claim that the evictions occurred only because his lord was concerned for the welfare of his tenant's souls, as they lived ‘too far from the church’.

Suisnish can also be reached by taking a minor road south from the B8083 to Camas Malag. The road ends at a parking area, and a trail skirts the coastline south to Suisnish.