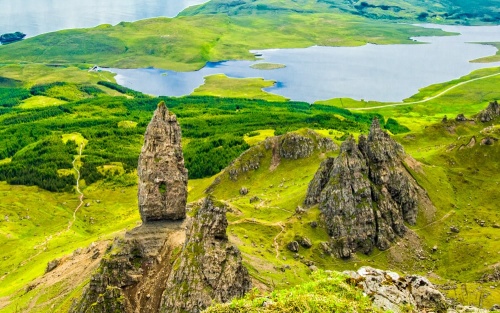 The Old Man of Storr

The Old Man of Storr is a dramatic rock pillar on the western coast of the Isle of Skye's stunning Trotternish Peninsula, north of Portree. It is a magnet for rock climbers, and the steep hike to the Old Man is one of the most popular walks on Skye, drawing thousands of visitors every year to enjoy the jagged rock formations of The Storr ridge and cliffs that tower over the waters of Loch Leathan.

The Storr is an extension of the Trotternish Ridge that gives the peninsula its name. There are several areas of impressive rock formations along the ridge, most notably The Quiraing, near Staffin, to the north.

These rock formations, including the Old Man of Storr, were formed by an ancient landslip that left in its wake one of the most remarkable landscapes in the world, one that continues to draw walkers and photographers alike.

The Old Man was only climbed for the first time in 1955, but since then it has become an exceptionally popular challenge for mountaineers. 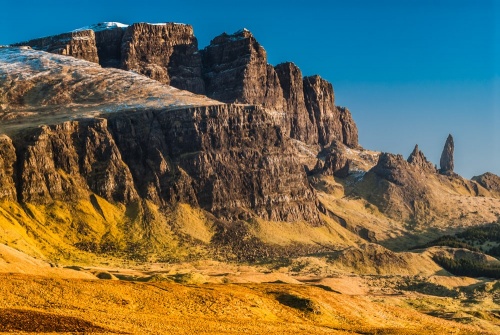 The Storr and the Old Man from Loch Leathan

The Old Man rises 55m (about 165 feet) and is all that remains of an ancient volcanic plug. It was formed when basalt lava flowed onto an underlying layer of sedimentary rock, forcing the sedimentary deposits to give way and producing an extraordinary series of otherworldly rock formations at several places along the Trotternish Ridge.

The word Storr comes from Old Norse meaning large or tall, so the 'old man' of Storr means an elderly large or powerful man. It is a reminder that Skye once formed part of a vast Norse kingdom that stretched over much of what is now northern and western Scotland. 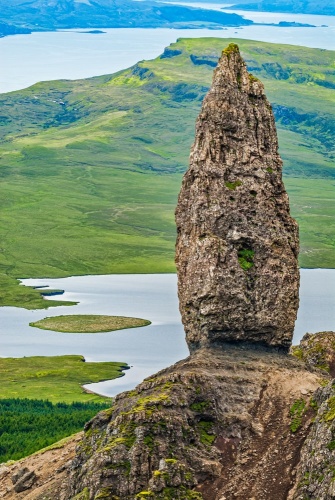 The Old Man is not the only rock formation at Storr, it is just the most famous, in part because it is visible against the skyline at great distances. Another dramatic rock formation is Needle Rock, or, more simply, The Needle (sometimes called The Cathedral), a ridiculously slender, pointed pillar of rock that rises to a sharp point like a needle. Don't confuse this Needle Rock with The Needle further north at the Quiraing.

Don't just climb to the Old Man and then turn around and go back; take your time and explore some of the other striking rock formations that make The Storr so compelling. 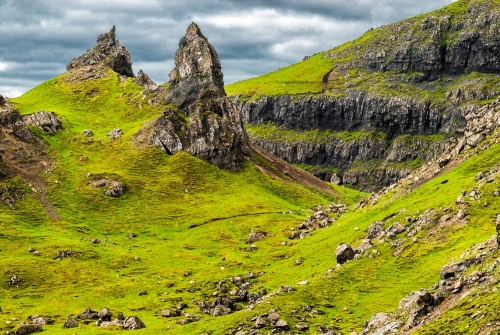 The Old Man of Storr from the northeast

Reaching the trailhead is easy; there is a parking area on the A855 coastal road about 7 miles north of Portree, at the northern edge of Loch Leathan (grid reference NG508528). From the car park, a signposted trail leads up the heavily gravelled hillside.

When we first visited years ago, the lower section of the trail passed through a forest plantation, but this sadly has been cut down, leaving the trail exposed. You pass through a wooden gate and follow the obvious path as it winds its way back and forth across the slope of the hill.

The trail levels briefly after you pass through a deer gate, then climbs again as the gravelled path ends and you find yourself on a steep, grassy slope. Be aware that this area of the trail can be muddy in wet weather.

The Old Man rock needle is in plain view by this point. 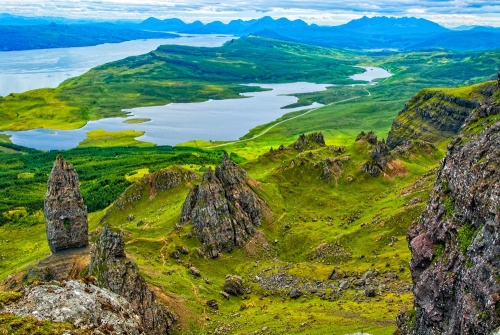 Looking towards Loch Leathan and Raasay

You have two options; you can go straight to the foot of the Old Man, and perhaps see climbers at play, scaling the sheer sides of the needle. But for the best views, we recommend carrying on past the Old Man to the right and continuing to the very top of the ridge where you can look back at the Old Man.

From there, you can get simply stunning views over the Sound of Raasay to Applecross on the Scottish mainland, south to a series of pretty lochs, and still further south to the Cuillin Hills. On a clear day, this view is unparalleled in Scotland (and that's really saying something). You can even, if you are ambitious, work your way along the ridge until you are looking down onto the Old Man itself. 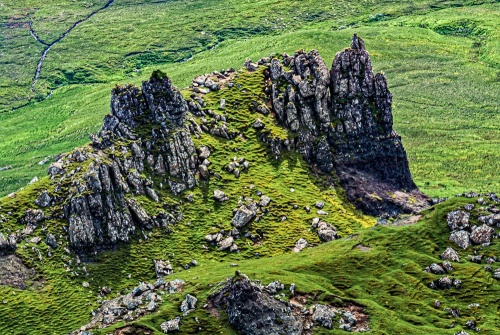 The Needle from above

The fact that the Old Man of Storr walk is relatively straightforward and access to the trailhead is easy has led to a drastic increase in visitors over the past several years, to the point where the car park is often overwhelmed at busy times of year, forcing visitors to park along the main road.

Please heed this: if you intend to visit, come early in the morning or late in the day, especially in the summer months, when the sheer volume of visitors is at its highest. Yes, I get it; you can't always pick and choose the time of day, if you only have a limited amount of time to explore Skye, but you really will get the most out of your visit if you avoid peak times. You have been warned! 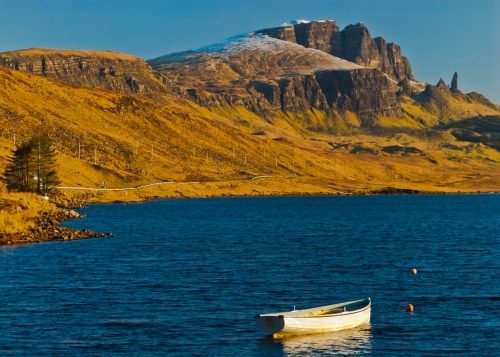 The Storr from Loch Leathan

Please allow at least an hour to climb to the Old Man, and another 30 minutes or more to make the return trip. The round trip is roughly 4km (about 2.7 miles).

Note that you can also get wonderful views of the Storr Ridge and the Old Man of Storr from the A855, to the south of Loch Leathan. I've photographed this view on numerous occasions by simply pulling onto the road verge at the southern end of the loch. On a clear day, the pinnacle of the Old Man stands out from the ridge like a beacon.

Nearby accommodation is calculated 'as the crow flies' from Old Man of Storr. 'Nearest' may involve a long drive up and down glens or, if you are near the coast, may include a ferry ride! Please check the property map to make sure the location is right for you.

More self catering near Old Man of Storr

More bed and breakfasts near Old Man of Storr