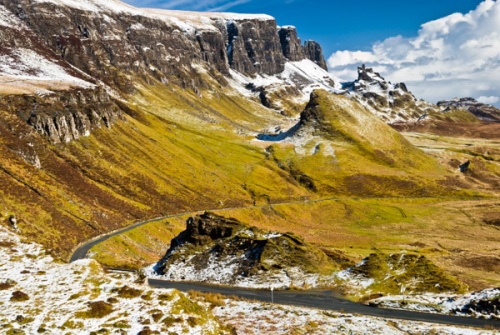 The Quiraing and the Trotternish Ridge

The Quiraing is an otherworldly area of bizarre rock formations on the west coast of the Trotternish Peninsula. The Quiraing was formed by an ancient landslip that left behind striking rock formations with such names as The Table, The Prison, and The Needle.

The formation of the Trotternish Ridge and The Quiraing goes back to the Tertiary period, when volcanic lave flowed over an underlying bed of sedimentary rock, causing it to give way. The Tertiary landslip was also responsible for creating the Old Man of Storr and the Fairy Glen, elsewhere on the Trotternish Peninsula.

The landslip that formed The Quiraing was the largest known slide in Britain, at an estimated 2km wide. It occurred after the last age, sometime up to 15,000 years ago. 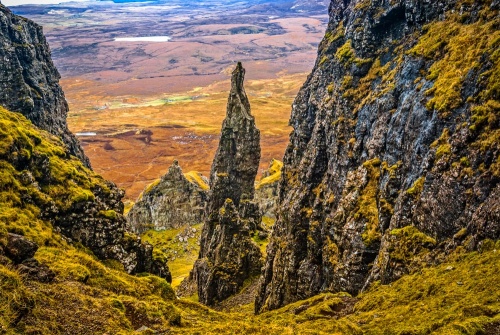 Geologists think that a layer of lava up to 300m thick pressed down on the weaker Jurassic sedimentary layer below, causing them to fracture along North-South fault lines. Massive blocks of rock slid towards the sea in a series of five movements, leaving behind the jagged landscape that we see today.

And what a landscape!

The Quiraing defies description; contained within a relatively small area are fantastic rock formations that seem to have sprung from a 'Lord of the Rings' film set. It is no wonder that The Quiraing draws photographers like a magnet, hoping to capture some of the area's magic. 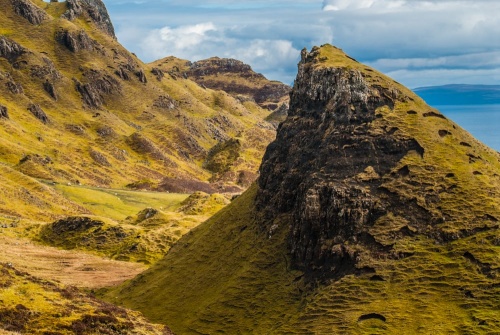 The Prison from the west

There is are two parking areas on the minor road linking the east and west coasts of the Trotternish. Coming from the east, turn off the A855 coastal road at Broraig, just north of Staffin, onto the road signposted Cuithearaing (Quiraing). The road passes a burial ground on the left at Sartle, and the ancient hill fort of An Dun Beag on the right, before beginning the steep ascent of the Trotternish Ridge.

You pass a small parking area for the cemetery on your left. Opposite this parking area is a footpath that skirts the low ground at the foot of the Trotternish Ridge before climbing steeply to meet the main Quiraing path. I suggest not taking this first trail, but carrying on to the official Quiraing car park and viewpoint at the top of the ridge (grid reference NG440679). 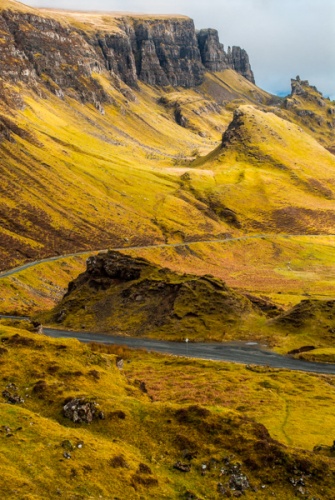 The Quiraing from the Uig road

Be aware that the car park is fairly small and fills up very quickly during the summer months. As with many popular destinations on Skye, we strongly recommend arriving early or late in the day to avoid the crowds (or simply plan your visit for a less busy time of year).

The car park is directly opposite an obvious and well-trodden footpath that runs along the crest of the ridge before dipping down onto the steep eastern slope. The route is very clear and needs little description. The trail crosses several small burns running down from the top of the ridge before arriving at The Quiraing.

From the car park to The Quiraing is roughly 3km (about 1.75 miles). Most people simply walk to The Quiraing and return the same way, but you can extend the walk to create a loop, or circuit, that climbs to the top of the ridge and follows the crest back towards the car park before rejoining the path. This longer circuit is about 7km long, or about 4 miles.

The first obvious feature you come to is the knife-edge formation known as The Prison. 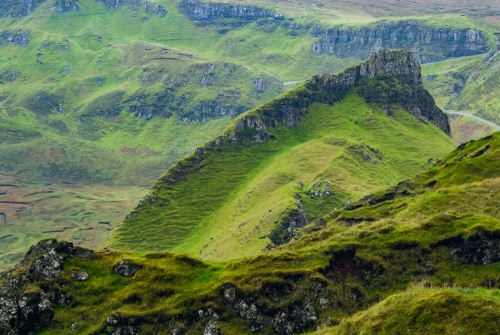 The Prison from above

The name Quiraing translates loosely as 'pillared fortress', so it should come as no surprise that one of the most prominent features of this unusual glacial outcropping of the Trotternish Ridge is known as The Prison.

Whether this formation actually resembles a prison is up to your own imagination; from one angle it looks like an upside-down letter V, but if seen from just the right direction it does indeed look like the crumbling ruins of a stone keep with corner turrets. The Prison can be climbed with a bit of a scramble up the steep slope, but be warned that there is plenty of loose scree and good footwear is a must. 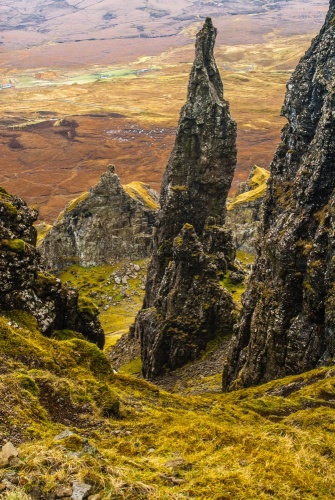 The most easily recognizable Quiraing landmark is The Needle. From the car park at the top of the Trotternish Ridge, The Needle doesn't look terribly impressive, but as you climb closer to the top of the ridge you begin to realize just how imposing this ragged finger of rock truly is.

The best vantage point can be had if you are brave enough to scramble up the scree to the plateau known as The Table, and look down on The Needle.

Be careful! When I say 'loose scree', I'm not joking; the scree here can be extremely difficult to climb. The slope is very steep in places, and you are never more than one false step away from an unpleasant tumble down the slope. That said, our 5-year-old daughter managed it, with some help from nervous parents. 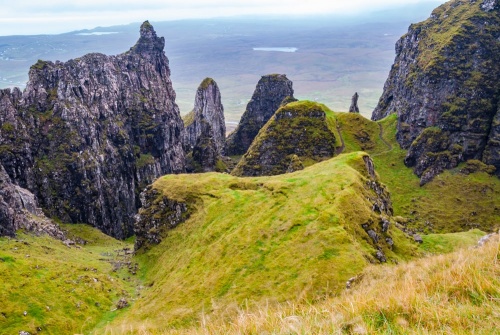 This small, green plateau seems oddly out of place, hidden away like a secluded snooker table in amongst the higgledy-piggeldy rock formations that surround it. In the days of clan warfare this plateau was used to hide cattle because it is invisible from below.

In more peaceful times the Gaelic sport of shinty was played on the mostly level surface. The easiest access is via a path around the west side of the plateau, rather than the steeper scramble up the eastern side.

The views from The Table are simply stunning, with all of Skye seemingly spread out beneath you.

You can, with some scrambling, climb to the top of the ridge and look down on The Table. 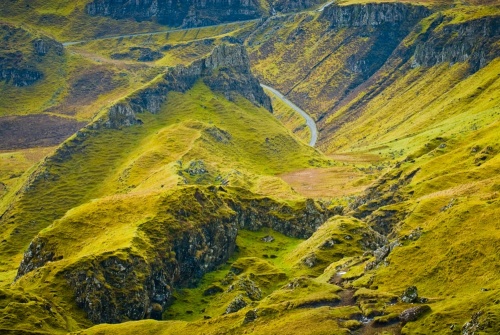 Looking east from The Needle

Our family has visited The Quiraing several times (I'm an avid photographer, so I felt compelled to keep coming back again and again in search of the perfect photo!)

My best photo came on a frosty morning, when a thin sprinkling of snow covered the ground. I wasn't intending to visit The Quiraing at all that morning, but I picked up a couple of Australian hitchhikers on their way to Uig. I thought I'd save them the steep climb up the slope of the Trotternish Ridge, so I drove them to The Quiraing car park to save them the effort. When I saw the view, I couldn't resist taking the main photo that accompanies this article.

About The Quiraing, Skye
Address: Staffin, Isle of Skye, Highlands and Islands, Scotland
Attraction Type: Countryside
Location: There is a car park (NG440679) at the top of the Trotternish Ridge, on the road between Staffin and Uig. From there a trail leads under the crest of the ridge to The Quiraing.
Location map
OS: NG451690
Photo Credit: David Ross and Britain Express

Nearest Accommodation to The Quiraing, Skye:

Nearby accommodation is calculated 'as the crow flies' from The Quiraing. 'Nearest' may involve a long drive up and down glens or, if you are near the coast, may include a ferry ride! Please check the property map to make sure the location is right for you.

More self catering near The Quiraing, Skye

More Hotels near The Quiraing, Skye

More bed and breakfasts near The Quiraing, Skye