Part way between Dunvegan and the pretty village of Edinbane, the B886 minor road branches off past the old Fairy Bridge, and strikes north into the Waternish peninsula, one of the prettiest regions of Skye. The peninsula is narrow, no more than a few miles separate east coast from west at its widest point, and it reaches less than eight miles in length.

Waternish consists of mostly rocky shoreline, with high ground down a central ridge of land. On that high ground are numerous reminders of the area’s rich heritage, with several hut circles and at least two Iron Age brochs. 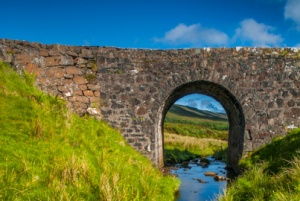 Fairy Bridge
At the foot of the Waternish peninsula, where the B886 branches north from the A850, lies an abandoned bridge beside the modern road. This is the Fairy Bridge, and like many places on Skye, the Fairy Bridge has a story associated with it; in this case, the bridge is said to mark the place where a fairy wife of a MacLeod chief said her final farewell to her husband before she left him to live amongst her own people.

The story goes that the chief of the MacLeod’s wanted to marry a Fairie princess. The king of the Faeries, Oberon, agreed to the match, but only on the condition that after a year and a day had lapsed the princess must return to her own people. So the marriage took place, and a son was born of the union, but after the allotted year and a day was over, the princess had no choice but to return to the Land of Faerie.

She parted from her husband and child at the Fairy Bridge. But the story does not end there; one day the infant son began to cry, as children do. The Faerie princess, upon hearing her child’s cry, returned from the Land of Faerie and comforted him, wrapping the child in a Faerie shawl. This shawl was preserved; it is the famed Faerie Flag of the MacLeod clan, which can be seen today at Dunvegan Castle. 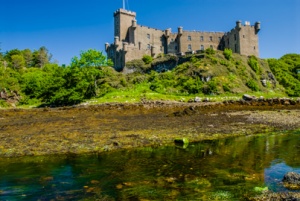 Dunvegan Castle
The premier attraction on the Isle of Skye, Dunvegan Castle has been the home of the MacLeod clan for 800 years. The castle is built on a rocky spur of land overlooking Loch Dunvegan, where a colony of seals can frequently be found sunning themselves on the rocks.

The earliest buildings here date to the 9th century, but much of the older parts of the castle are 12th century, making it the oldest continually inhabited castle in Scotland.

Mementoes of Clan MacLeod are on display inside the castle, including a lock of Bonnie Prince Charlie’s hair, and the famous Fairy Flag, This tattered fabric has been identified as Persian in origin, and dates to sometime between the 4th and 7th centuries. The origins of the flag are shrouded in myth; some tales tell that it is of faerie origin, others, that it was a crusader’s banner, or the battle flag of King Harold Hardrada of Norway.

The castle is set within an attractive formal garden area, originally laid out in the 18th century. The gardens now include a water garden and walled garden, with enjoyable wooded walks to the edge of the loch. 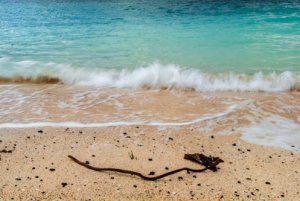 Coral Beach
Another of Skye’s undiscovered treasures, the Claigan Coral Beach is located at the north-west tip of the Dunvegan peninsula. Take the road to Dunvegan Castle but carry on past the castle parking lot. At this point, the road becomes narrow, as it winds across moorland to a signposted parking area just beyond Claigan.

From here, a rutted path leads along the coast before turning inland. At this point, you need to be wary, as the actual path departs from the roadway and follows the line of the coast over a rise and down to the first of the coral beaches.

This first beach is very small and gives only a taster of what is in store. Carry on over the next small hill to the proper coral beach. The beach is an extraordinary sight; a bit of tropical paradise landed by mistake in the Inner Hebrides.

The beach is composed of uncountable bits of broken coral. Children will love exploring in the sand and finding oddly shaped pieces of coral, and shells with coral embedded in them. The best time of day to visit is in the evening, when the setting sun lights the top of MacLeod’s Tables across Loch Dunvegan. 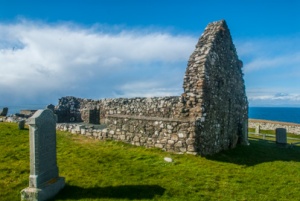 Trumpan Church
The ruined church of Trumpan is located in a lovely location, looking out over the western shores of the Waternish peninsula. The beauty of the site makes it all the more poignant to remember that this isolated church was the scene of one of the bloodiest and most terrible events in the sad history of clan warfare in Scotland.

It was here on the first Sunday in May 1578 that a group of MacDonalds from Uist trapped the local MacLeods in the church. The MacDonalds set fire to the church and burned alive all those inside. One small girl escaped from the church and ran for help to Dunvegan. MacLeods from Dunvegan massed quickly and marched to Trumpan, where they trapped and killed the MacDonalds, who had been stranded by the receding tide.

The ground is peaceful now, the churchyard well kept, the graves neat and tidy, but it is hard to stand beside the tiny, roofless church and not hear the distant echoes of those tragic events long ago.