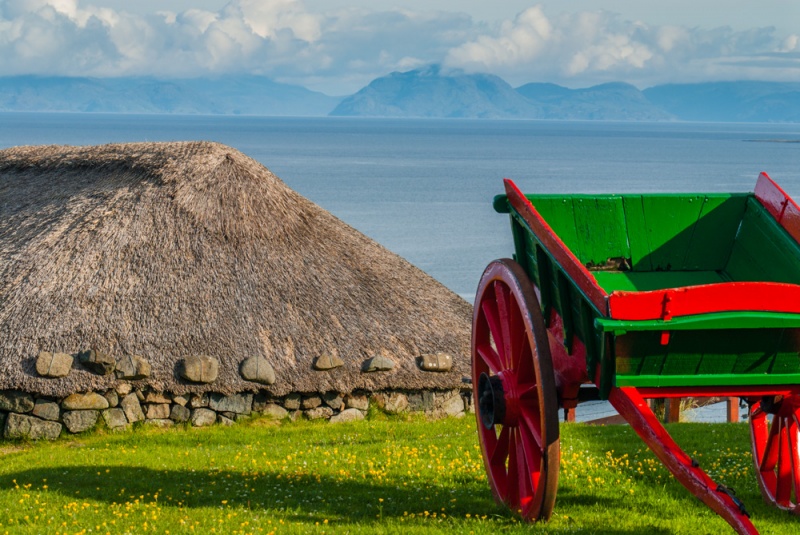 The fascinating heritage of the Isle of Skye comes to life in this intriguing museum in Kilmuir, housed in seven thatched croft houses. Exhibits range from Iron Age weapons to items used by Bonnie Prince Charlie and Flora MacDonald.
Flora MacDonald is buried in Kilmuir cemetery, just up the road from the museum.

The Kilmuir museum was launched in 1965 with a simple aim; to preserve a township of thatched cottages, reflecting as closely as possible island life in the late 19th century.

Though there are few thatched cottages to be found in the Highlands today, things were very different in the 19th century, when thatched buildings were common. Made to withstand the worst of the Highland gales, these long, low buildings were heated by peat fires and were built in a style that changed very little for centuries.

Though crude by modern standards, the cottages reflect the lifestyle of islanders; they expected to spend most of their time outside, so such luxuries as private rooms were unheard of and, to most people, unnecessary. 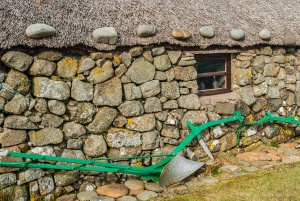 A plough outside a croft wall
The cottages are built with stone walls, and timber beams supporting a thatched roof. In an environment where trees were scarce, the islanders often had to rely on shipwrecks to provide timber for roofs.

The cottages follow a very similar layout, with the kitchen acting as the main room. Here the whole family cooked, ate, and sat together. The heat was provided by dried peat, and light by a lamp burning fish oil. Furniture is very basic; a table, bench, perhaps a barrel chair for the man of the house, and simpler chairs or stools for the rest of the family and visitors. Of the kitchen, in the centre of the house, is the bedroom area, with box beds holding a straw mattress.

Other buildings on the site include a barn, furnished with tools and agricultural implements, some over 200 years old. Tools would often be made by the crofter, or by the nearest blacksmith.

One small cottage is presented as a weaver's cottage, a busy workshop for creating blankets, clothing, and plaid cloth. Wool-working tools over 2 centuries old are on display, including carders, dye pots, and a hank-cross.

One of the cottages is depicted as a Ceilidh House, where villagers gathered to entertain themselves with Gaelic songs, dances, storytelling, and general conversation. Ceilidh gatherings were all inclusive; young and old participated in this traditional community gathering.

A Royal Visit
When the Duke and Duchess of York (later to become George V and Queen Mary) visited Skye in 1933 they were given a tour of the largest house at Kilmuir and were impressed with the tidy appearance of the cottage and the skill of the crofters in being able to build such sturdy dwellings.

Our Visit
The location is the first thing that struck me about the museum. The cottages are built on a shelf of land with fantastic views across to the Isle of Lewis. It really is simply stunning. The simplicity of the cottages was very striking; they seemed to evoke a sense of a bygone style of life, a style that remained unchanged for generation after generation. Do take the time to walk up the road to Kilmuir cemetery where you will find the large Victorian memorial to Flora Macdonald. 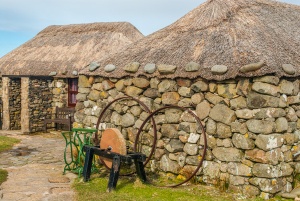 A pair of the smaller cottages 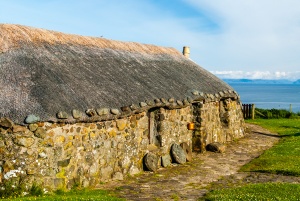 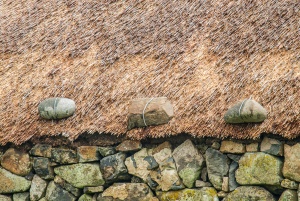 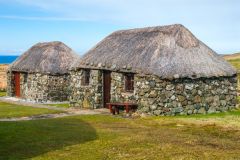 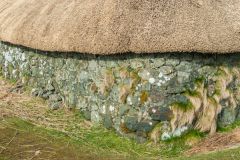 Nearby accommodation is calculated 'as the crow flies' from Skye Museum of Island Life. 'Nearest' may involve a long drive up and down glens or, if you are near the coast, may include a ferry ride! Please check the property map to make sure the location is right for you.

More self catering near Skye Museum of Island Life >>

More bed and breakfasts near Skye Museum of Island Life >>