Portree and Minginish, Isle of Skye 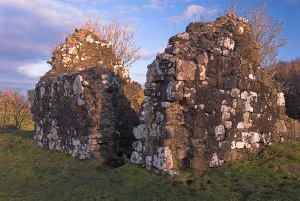 Portree is the largest town on Skye, and the closest thing to a metropolitan environment to be found on the island. But that statement is misleading, as Portree is, at heart, a quiet fishing village with colourful old buildings arranged around a lovely semi-circular harbour. The Minginish is loosely bounded by Loch Bracadale in the north and the Cuillin Hills to the south. In this area are lovely sandy beaches, an Iron Age broch at Struan, and some of the prettiest drives on Skye. To the south, Glen Brittle runs to the slopes of the Black Cuillins.

For the purposes of simplicity, I've included the Duirinish peninsula in this region. The most prominent feature of the Duirinish peninsula are MacLeod’s Tables, two flat-topped mountains which feature in several Skye legends. One version of the story tells that Alastair MacLeod visited the court of James V. There, the king snubbed MacLeod, and challenged him to admit that nothing in his remote Highland estate could compare to the grandeur of the court. MacLeod replied that he could set a finer table, and light it with better candlesticks.

When James visited Skye, MacLeod prepared a banquet for him on the top of MacLeod’s Table (Healabhal Mhor), overlooking his castle at Dunvegan. The scene was lit by MacLeod’s nobles, dressed in their finest, each holding aloft a burning torch. The king admitted defeat and MacLeod won the wager. The best place to view MacLeod’s Tables is from the road to Claigan, north of Dunvegan. Also on Duirinish is Neist Point, where an early 20th-century lighthouse is now an unusual hotel with spectacular views to the Outer Hebrides. 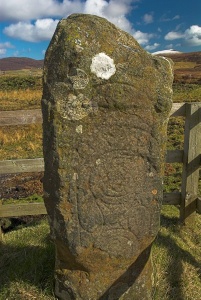 This Pictish symbol stone is one of the few such examples found on the west coast of Scotland. The incised carving is relatively crude compare to later Pictish work, and only one side of the stone shows any signs of carvings.

>The design is simple, and includes several common Pictish symbols, including a crescent,V-rod, two discs, a Z-rod, and a mirror and comb. The stone was discovered being used as a doorstop in the village, before it was rescued and erected here in 1880.

For those who care, Tote stone is classified as a Type 1 Pictish stone, that is, unworked, with no cross, and incised symbols. This type of stone is thought to date from the 6th, 7th, and 8th centuries.

To find the stone, take the B8036, accessible off the A850 east of Skeabost or the A87 south of Kensaleyre. Turn onto the minor road signposted towards Tote, and the stone is about 100 yards ahead on the right, surrounded by a protective wooden enclosure. 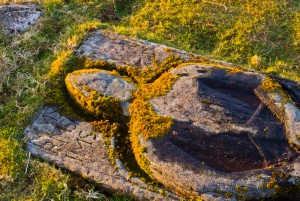 On a small island in the Snizort River lies the ruins of an ancient chapel, once called the "Cathedral of the Isles". Skeabost may originally have been a pagan Pictish centre, but after the growth of Christianity the island was dedicated to St Columba and a monastic community and church established, one of the first Christian churches on Skye. Near this peaceful site, the warring MacLeod and MacDonald clans met in the bloody Battle of Skeabost Bridge in 1539 to determine control of Trotternish.

Today the chapel and graveyard are overgrown with moss, but the ruins of old gravestones and several small chapels still stand. Two crusader tombs are especially memorable; one lies in the open on the western side of the island, the other within the walls of a compact chapel.

To get to St Columba’s Island, park in a layby opposite the entrance to the Skeabost Hotel. Walk up the hotel drive to reach an overgrown road on the right that crosses an old bridge. Turn left immediately after the bridge and follow the trail to the island, which should be easily visible about a hundred yards ahead. 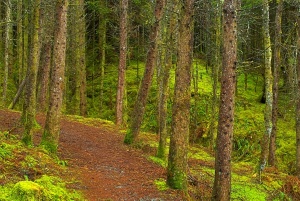 Much of Skye is treeless, with large expanses of peat moorland and open ground. But this is no barren wilderness. There are pockets of dense coniferous forest, and broadleaf habitat as well. On the slopes of Beinn na Greine, pressing up against the southern outskirts of Portree, is a small area of woodland crossed by walking trails, with small burns tumbling down waterfalls on their way to Loch Portree and the sea.

The walks here are not strenuous, and provide a nice sheltered alternative to the more open and decidedly more vigorous walking opportunities elsewhere in the area. Park in the Visitor Centre parking lot immediately south of Portree, and follow the well-made trails into a still world of moss and lichen, tall trees and quiet water. 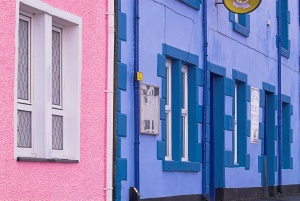 Portree is the largest town on Skye, though it would qualify as a medium-sized village almost anywhere else. The core of Portree is a collection of colourful cottages clustered around the small, round harbour, where fishing boats bob at anchor in a timeless scene. The town derives its name from the Gaelic 'Port-an-Righ', for 'Royal Port', or 'King's Port', a reference to the visit in 1540 of James V.

James struggled to get the Hebridean clans to acknowledge the overlordship of the Scottish crown, and his royal progress, backed by a fleet of warships, 'persuaded' the islanders to kowtow. The Royal Hotel on Bank Street is built on the site of an earlier hostelry where, in 1746, Bonnie Prince Charlie bid farewell to his rescuer, Flora MacDonald. Portree is well supplied with accommodation options for visitors, and makes a good centre for exploring the north end of the island. 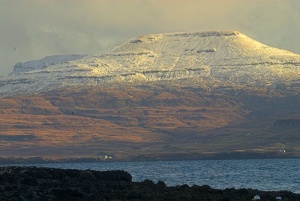 Of the two, the northerly table is the larger and more dramatic. The best view of the Tables is to be had from the far side of Loch Dunvegan, on the road from Dunvegan that leads north to the Coral Beach.