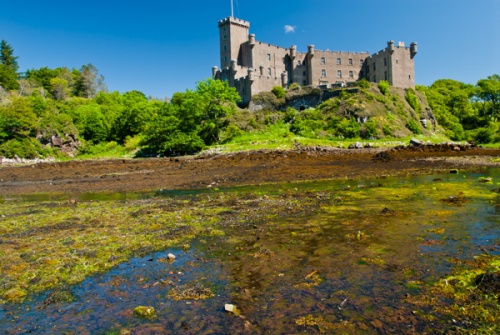 Dunvegan Castle is thought to be the oldest occupied castle in northern Scotland; it has stood on its rocky outcrop by the shore of Loch Dunvegan for over 800 years. Dunvegan has been continuously occupied by the chiefs of Clan MacLeod in an unbroken line stretching back for over 7 centuries and 30 generations. 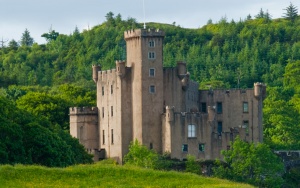 Dunvegan Castle from the north

The castle stands on a high basalt rock overlooking the loch. There was a Norse fortress here, but the current castle structure dates to around 1266. The site was encircled by a curtain wall that completely protected the promontory on which the castle stands. The only entrance through the wall until 1748 was through a sea gate, which still stands. Almost all other traces of the curtain wall has disappeared.

Inside the curtain wall was a feasting hall with several outbuildings. In the mid-14th century, a four-storey tower house was added on the north side of the rocky site, combining defensive features with comfortable family quarters. Around 1500 a second tower was added by the 8th chief, Alasdair Crotach. This tower, intended as accommodation for guests, was dubbed the Fairy Tower. In 1623 the 15th chief, Ruairidh Mor (Rory Mor), replaced the old medieval feasting hall with a range of state apartments above storage cellars.

Ruairidh Mor's grandson added a Piper's Gallery in 1664, and a south wing two decades later. The Piper's Gallery is a reminder of the role played by the MacLeod chiefs in popularising the Highland tradition of piping.

The old tower was left roofless when the new state apartments were complete, and it was not until 1790 that the 23rd chief had it re-roofed to become a comfortable drawing room. A barrack block was added at the same time.

Over the 18th and 19th centuries, the authentic medieval underpinnings of the castle were gradually hidden beneath an elegant array of mock battlements. The author Sir Walter Scott approved, complimenting the 24th chief, John Norman, for his efforts to 'medievalise' the castle.

In the grounds you will find Laundry Cottage, built in 1734, formerly the estate office before being put to practical use as a laundry. 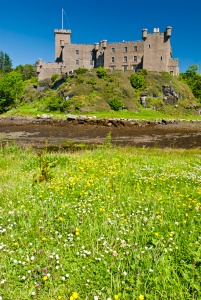 Castle view from the shore

In a special display case within the castle is the prize possession of Clan MacLeod; the Fairy Flag. This is the Highlands, and you almost expect myths and fantastical tales to appear around every corner, but even so, the Fairy Flag is something special.

There are several versions of the story, so you are free to choose your own! One story goes that a chief of Clan MacLeod fell in love with a 'bean sidhe', a fairy princess. The princess's father was against the marriage, but his daughter pled to be allowed to marry the chief until the father agreed to a period of handfasting. This was a sort of trial marriage that lasted for a year and a day. At the end of the handfasting period the princess was to return to the fairy realms, and bring with her nothing from the human world.

The agreement was made, and for a year the couple lived happily at Dunvegan. A son was born to them, but at the end of the handfasting period the princess bade a tearful farewell to her husband at the Fairy Bridge, not far from the castle. She made her husband promise that the baby would never be allowed to cry, for the sound of his cries would disturb her even in the fairy realms.

The distraught chief agreed, but the depth of his grief alarmed his clan members. They thought to cheer him up and organised a large party for his birthday, to take his mind off his loss. The revellers celebrated long into the night, and the young nursemaid assigned to guard the baby crept from her post to watch the revels.

You can perhaps guess what happened next; the baby kicked off his coverlet and began to cry, and the mother heard him from far away in her fairy realm. She appeared by his cradle, wrapped the baby in her shawl, and sang a lullaby to nurse him back to sleep. The nurse returned, and though could hear the lullaby she could not see the fairy mother. She took the child, still wrapped in the strange shawl, to see the chief, and told him what had happened.

When the child grew to be a young man he told his father a strange tale; that the shawl was a talisman, and that if the clan ever found themselves in danger they should wave the shawl three times and armies from the fairy realm would come to their aid. A powerful weapon indeed, but there was a catch; the fairy flag could only be used three times, then it would return to the fairy realms, taking with it the one who waved the flag. 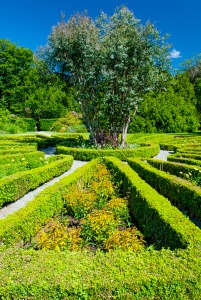 The Fairy Flag has been used twice; once when the clan was in battle against their bitter enemies the MacDonalds. The clan chief waved the flag three times and the tide of the battle turned in the MacLeod's favour. The second time the MacLeod cattle herds were stricken with plague and the clan members were dying of starvation. The chief waved the flag and the fairies returned the cattle to health.

Another tradition says that the Fairy Flag was guarded by hereditary standard bearers, and only the eldest male of this family was allowed to unfurl the flag. The very first standard bearer was honoured by being buried in the tomb of the clan chief on Iona.

During World War II many MacLeod servicemen carried a photo of the Fairy Flag in their wallets, and it is claimed that no airman who carried the photo was lost in the Battle of Britain. The chief of Clan MacLeod famously offered to bring the flag to Dover and wave it at the Germans should they invade Britain. Thankfully his intervention was not required, and the Fairy Flag is still awaiting its third use. In the meantime, it sits in a special display case in Dunvegan Castle.

A fanciful myth? Perhaps, but where does the flag actually come from? Scientific tests on the fabric reveal that it is made of silk from Rhodes or Syria, and dates to sometime between the 4th and 7th centuries. So it is of very ancient provenance. One story suggests that it was brought back from the Holy Land by a crusader. 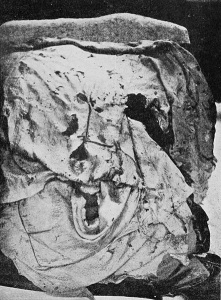 When Bonnie Prince Charlie made his bid for the throne in 1745 many of the MacLeod's supported his cause. The chief, however, did not. In fact, he helped search for the Prince after his escape following defeat at the Battle of Culloden.

He might have saved himself some trouble if he had looked close to home, for directly across the loch from Dunvegan Castle is Galtrigal, home of Donald MacLeod, who piloted the prince's boat from Uist to Skye when he was helped escape by Flora MacDonald.

Years later, MacDonald's daughter married the tutor to the MacLeod heir and lived in the castle. Her mother, Flora, had emigrated to America, but made several return visits and eventually died and was buried on Skye (at Kilmuir cemetery where you can see her memorial today). Flora MacDonald visited her daughter at Dunvegan and is thought to have lived with her for several years.

During one of those stays she gave her collection of Jacobite relics to her daughter, and they have stayed at Dunvegan ever since. Among the objects left by Flora are a lock of Bonnie Prince Charlie's hair, her stays, and her pincushion with the names of Jacobite supporters. There is also a small portrait of her copied by the wife of the 24th chief.

A drinking horn, made from ox horn, with a silver tip. Named for Sir Rory Mor (Ruiaidh Mor MacLeod) clan chief who lived from 1562-1626. Some historians suggest that it actually dates from the 10th century and is of Norse origin. Clan tradition says that the chief must prove himself by drinking a full measure of wine from the horn.

This is a late 15th-century ceremonial cup made of wood decorated with silver. It was created in 1493 for Caitriona, wife of John Maguire of Fermanagh. How did it come to Dunvegan? History is vague on this point. One legend says it was a gift from the faeries. 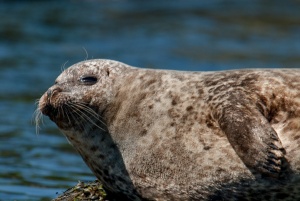 A seal in Loch Dunvegan

You can't visit Dunvegan Castle without taking a boat trip into the loch to see the seals! A colony of grey seals lives on a few scattered islets in the middle of the loch, and regular boat trips leave from the shore (extra charge applies).

When our family visited the day was dismal, with rain whipping in, and waves scudding across the loch. It was touch and go whether our seal boat would go ahead, but the pilot was game, so we said 'sure, let's go'.

Despite the wind and mist, which showed a distracting habit of getting on my camera lens, we got quite close to the seals and I even managed to get a few passable photos, not an easy task considering the boat was bobbing on the water all the while.

Our pilot was extremely informative and told us plenty of stories about the castle, the seals, and folktales of Skye. We returned, somewhat damper than when we left, but very, very happy. I can highly recommend the seal trips!

And what of the castle itself? I've been twice, and each time I saw something different and learned something new. I love Skye, and the castle is an absolute delight to visit.

Nearby accommodation is calculated 'as the crow flies' from Dunvegan Castle. 'Nearest' may involve a long drive up and down glens or, if you are near the coast, may include a ferry ride! Please check the property map to make sure the location is right for you.

More self catering near Dunvegan Castle