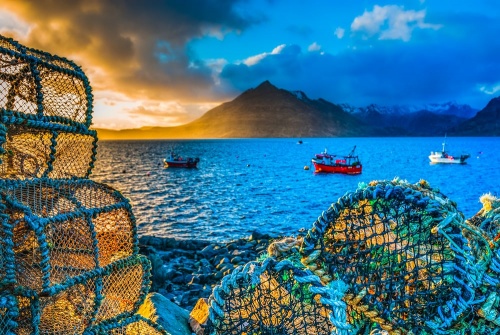 Fishing boats in the harbour at Elgol

Elgol is a picturesque fishing and crofting village on the southwestern coast of the Strathaird Peninsula of Skye. It is perhaps best known as the departure point for boat trips across Loch Scavaig to the stunning freshwater loch of Loch Coriusk, at the heart of the Black Cuillins. You can also walk over the headland to Prince Charlie's Cave, where Bonnie Prince Charlie hid from his enemies.

The village grew up at the point where the Allt Port na Cullaidh empties into Loch Scavaig. There is a cluster of buildings around the small jetty, including an elementary school, a village hall (which doubles as a shop), and scattered houses on both sides of the road into the village. 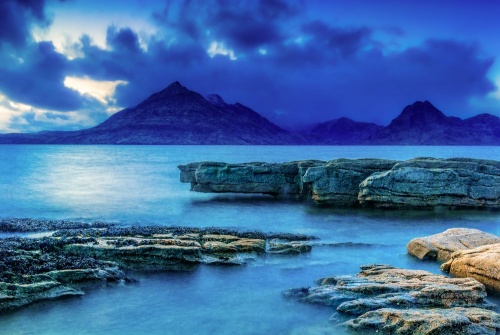 The Black Cuillins from Elgol

The name Elgol comes from the Gaelic Ealaghol, which is normally translated as 'noble dale' or 'field of wild angelica'. An alternate explanation of the name is that it means 'weeping swan' and refers to a Viking raider who sailed in a boat named 'The Swan' and died when his boat sank during an attack on the region.

Another version of the story says that the village takes its name from Aella, a 5th-century follower of the British warlord Vortigern, who fought a battle with local Picts and Scots near here.

And yet another version says that Elgol comes from the Old Norse 'Helga Hollr' for holy hill. The name may refer to St Maelrubha (St Maree), who came to this area of Skye in AD 673 and converted many of the local population to Christianity. St Maelrubha is remembered in placenames such as Kilmarie (Maree's Church'), 6km up the Torrin road. 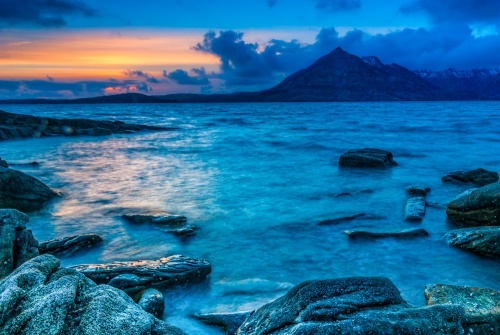 This area of Strathaird has traditionally been a stronghold of Clan Mackinnon. The Mackinnon clan seat was at Dun Ringill, near Kilmarie, but the clan abandoned their stronghold in favour of Castle Moil in Kyleakin and Dun Ringill is now ruinous.

Prior to the Clearances, Elgol had a much larger population than it does today, when about 150 people reside here. Many of the houses we see clustered along the road and the harbour are holiday lets and are only occupied seasonally. One of the largest houses is Coriusk House, a former croft house that dates to at least the early 18th century. It is now a Michelin Guide restaurant with lodging rooms. 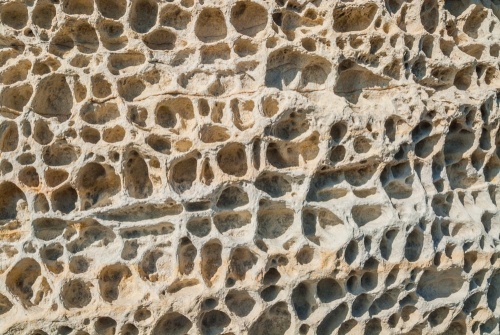 Elgol is known for its superb views across Loch Scavaig to the peaks of the Black Cuillins, and also for the peculiar 'honeycomb' cliffs that rise up from the rocky shore. The striking sandstone cliffs were formed by erosion.

Over the course of thousands of years, hard quartz embedded in the sandstone has been cemented together by calcium carbonate deposits, which have then been dissolved, leaving behind the peculiar honeycomb appearance we see today.

To investigate the cliff patterns close up, simply walk along the rocky shoreline north of the village. The rocks you see on the shore at the base of the cliffs are mudstones. If you examine the mudstones closely you can see that they contain minute pieces of fossilised fish scales and other fossils such as gastropods and bivalves. 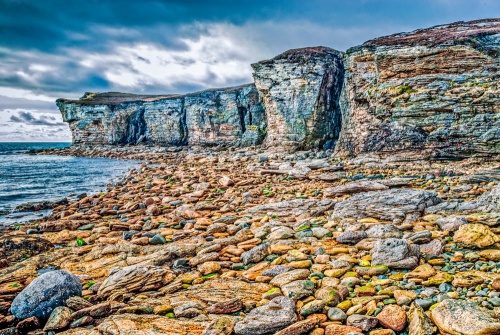 Following his defeat at the Battle of Culloden in 1746 Prince Charles Edward Stuart was hunted by the victorious English. He crisscrossed the Highlands, staying one step ahead of his pursuers. On 4 July 1746, he came to Elgol, where he sought refuge with the chief of Clan MacKinnon.

MacKinnon hid the Prince in a cave now known as Uamh Phrionnsa at Suidhe Biorach, on the southern coast of the headland that runs south from Elgol to meet the small bay of Port an Luig Mhoir. On the following day, the MacKinnons rowed the fugitive prince across Cuillin Sound to the Scottish mainland. After many more narrow escapes, he would board a French ship and sail to safety abroad.

You can explore Prince Charlie's Cave by following the same route that Bonnie Prince Charlie took almost 300 years ago. A trail leaves Elgol and passes over the top of the headland, following the coast to Suidhe Biorach, where the trail drops down to shore level. Be aware that the cave can only be accessed for two hours either side of low tide, so please consult the tide tables posted in Elgol before setting out! 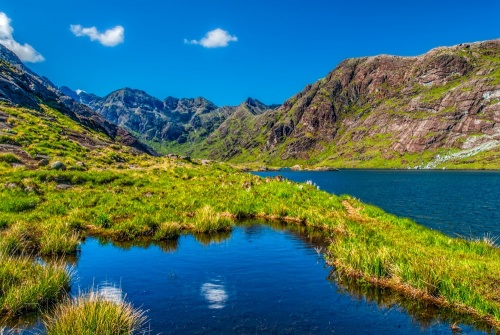 Most people come to Elgol to enjoy a boat trip to Loch Coriusk, or simply to see the herds of seals that can be found locally. There are two boat tour companies, Misty Isle Boat Trips and the Bella Jane. Both have kiosks at the Elgol pier. Trips run year-round but are sporadic during the winter months.

It is well worth taking a trip to explore Loch Coriusk, which is set in a ring of high, jagged peaks at the heart of the Black Cuillins. There is a 7km trail around the entire loch, but take note that crossing the outflow of the Scavaig River can be a challenge after heavy rains.

One very popular local walk follows the coast north from Elgol to the beach at Camasunary. If you are an experienced hiker you can extend this delightful walk to Loch Coriusk. This longer walk takes you across 'The Bad Step' (aka The Big Step), a narrow rock ledge with a straight drop into the waters of Loch Scavaig for the unwary. 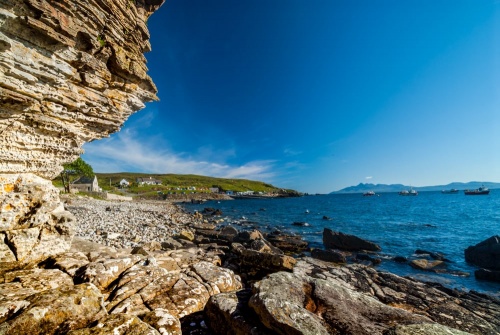 Elgol from the north

Elgol is 15 miles southwest of Broadford, reached by the B8083, a single-track road that twists and winds its way around the northern end of Loch Slappin, with the rounded peaks of the Red Cuillins to the east, before striking off across the Strathaird Peninsula to reach Elgol.

The route passes the ruined and roofless medieval church at Cill Chroisd, where the churchyard holds the graves of generations of Mackinnons. Near the church is a mound where St Maelrubha is said to have preached to the locals.

The road then runs through the scattered village of Torrin before rounding the northern end of Loch Slappin. It hugs the western bank of the loch before passing through Kilmarie, with its ancient burial ground, and skirting the steep slopes of Ben Meabost and Ben Cleat before dropping down to the shore at Elgol. 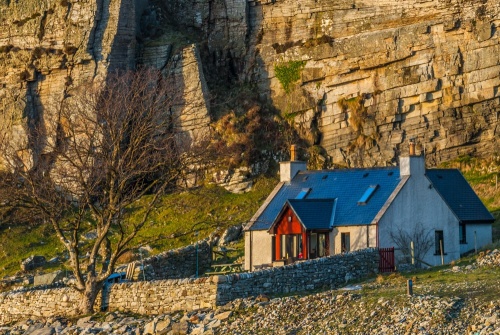 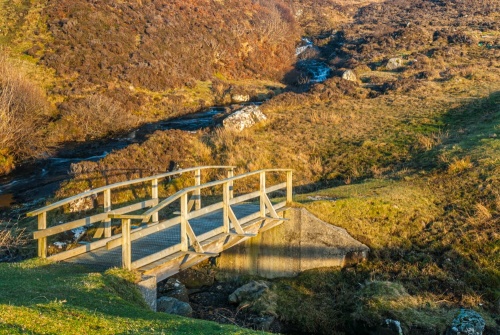 There are two parking areas in Elgol. One is as you enter the village. This car park looks down on the harbour and offers wonderful views across Loch Scavaig to the Black Cuillins. The second, larger car park is at the harbour itself. This can get full on summer days, so if you plan on visiting, it is always a good idea to arrive early in the day (or simply wait until most of the crowds have gone home later in the day).

If you do stay into the evening you'll be treated to glorious sunsets across the loch. I've photographed Elgol beach at sunset several times, and it is a simply stunning location. Elgol is the sort of place you want to linger, and the sort of place you find yourself coming back to again and again.

About Elgol, Skye
Address: B8083, Elgol, Isle of Skye, Highlands and Islands, Scotland, IV49 9BJ
Attraction Type: Village
Location: 15 miles southwest of Broadford, at the end of the B8083. There are two car parks; one as you enter the village and a second at the harbour.
Location map
OS: NG518136
Photo Credit: David Ross and Britain Express

Nearby accommodation is calculated 'as the crow flies' from Elgol. 'Nearest' may involve a long drive up and down glens or, if you are near the coast, may include a ferry ride! Please check the property map to make sure the location is right for you.

More self catering near Elgol, Skye