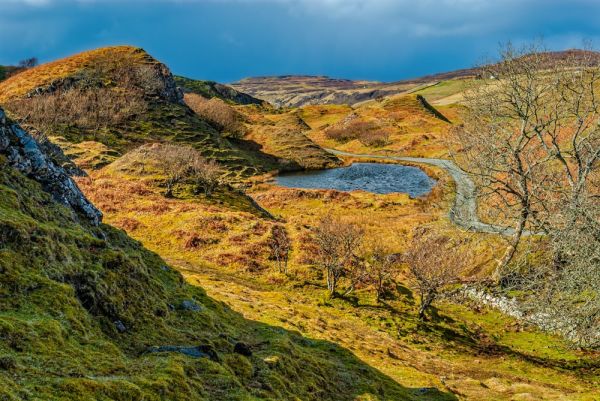 The Fairy Glen is a magical area of bizarre rock formations, conical hills, and small lochans located in Glen Uig, just outside the village of Uig, on Skye's Trotternish Peninsula. Despite the name, there are no faerie traditions clinging to the glen; presumably the glen is so-named because of its otherworldly appearance.

That appearance is due to ancient landslips caused by volcanic activity, the same geological shifts that produced the Quiraing, on the eastern side of the Trotternish. The jagged formations produced by the landslips were later softened by glaciers to create the remarkable formations we see today (or, maybe it was all the work of faeries).

The Fairy Glen forms a small part of Glen Uig, and is easily explored on foot by a reasonably fit person. Within a few hundred metres are lochans, waterfalls, atmospheric copses of trees covered in moss, jagged peaks and steep cliffs. 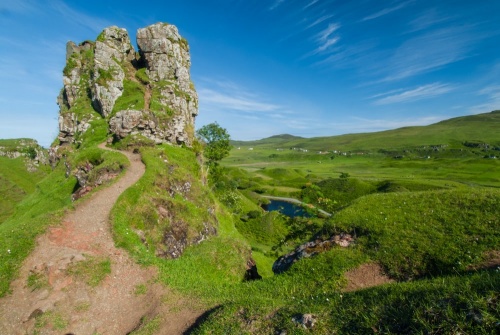 The most prominent geological feature is Castle Ewen, a rock formation that towers over a small lochan. The 'castle' is so called because it looks for all the world like a crumbling medieval fortress perched atop a small hill, but it is an entirely natural formation.

A trail leads from the valley floor to the summit, where you squeeze through a narrow opening to reach a small natural chamber in the rock that offers superb views over the Fairy Glen below.

The ridge leading to Castle Ewen is narrow, with steep falls to either side, so if you have trouble with heights you might want to think twice about making the climb. Obligatory safety warning aside, I've never heard of anyone having an accident here! 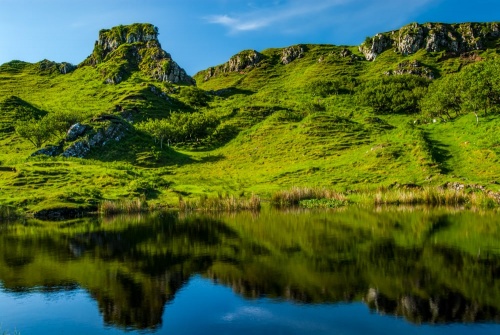 Castle Ewen reflected in a lochan

The mystical landscape of the Fairy Glen has led to its popularity with various spiritual practices; when I visited last I saw several small stone circles arranged on the valley floor, and several altars with coins and other small, colourful articles left as prayer offerings.

One of the most obvious features on the valley floor is several stone spirals and other symbolic shapes made from carefully arranged stones. These rock shapes are modern, presumably created by visitors to add to the mystical atmosphere of the glen.

Please don't be tempted to add to the shapes; shifting stones upsets the delicate ecology of the Fairy Glen and affects animal grazing. Please be sensible and leave the glen as you found it! 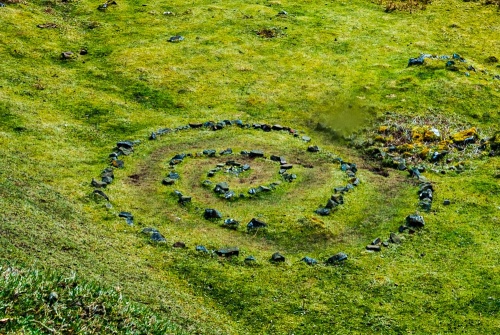 Stone spirals on the valley floor

There are really three options for visiting the Fairy Glen. One is to take an organised tour, offered by several local companies. The second option is to park in Uig and walk up the glen on foot, a distance of 1.5 miles. Allow 30 minutes for the walk from the centre of Uig. You can also take a regular bus service and get off in Uig.

Whether you park in Uig or come by bus, the last leg of your trip is the same, and it is very simple; walk south on the A87, past the church on your left and Captain Fraser's Folly on your right, and take the minor road signposted to Sheadar and Balnaknock.

Simply follow the road for 20 minutes as it strikes east deeper into the glen. You will pass the newly-opened car park on your left and see the Fairy Glen shortly afterwards on your right, beyond a picturesque lochan beside the road. 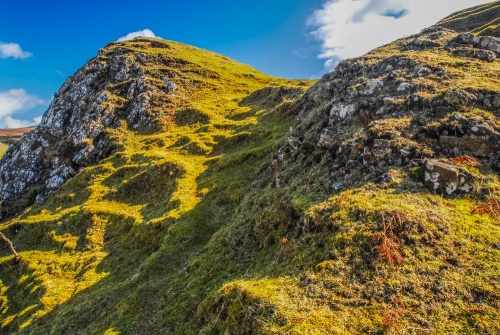 Parking at the Fairy Glen

Most visitors, however, will visit the Fairy Glen by car. Turn off the A87 immediately south of Uig village, on the single-track road to Sheadar and Balnaknock. Follow the road to the car park, a distance of about 1 mile.

The car park, which opened in 2020, is the most recent, and very welcome addition to the Fairy Glen visitor experience. Before the car park was built, visitors were forced to park along the verge, which limited the number of vehicles that could safely use the space. The car park is located immediately beside the road, a very short walk from Castle Ewen, in the heart of the glen.

Our family has visited the Fairy Glen several times, and really enjoyed the magical, dare I say, faerie-like quality of the landscape. Be aware that over the past few years the Fairy Glen has become extremely popular with visitors, and it may be crowded at the height of summer.

If you want to really experience the glen at its mystical best, come early or late in the day, or at another time of year when there are likely to be fewer visitors. 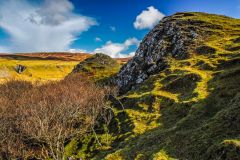 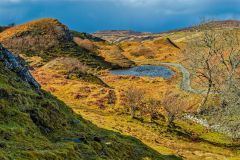 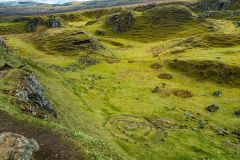 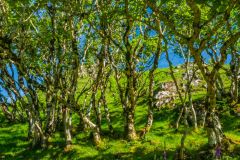 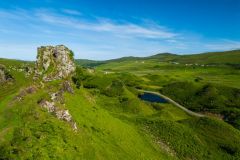 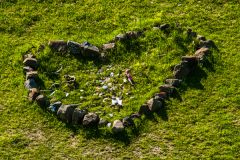 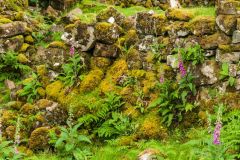 About Fairy Glen, Skye
Address: Balnaknock, Uig, Isle of Skye, Highlands and Islands, Scotland, IV51 9YG
Attraction Type: Countryside
Location: On a minor road immediately south of Uig, off the A87. There is a parking area a few hundred metres from the heart of the glen.
Location map
OS: NG415629
Photo Credit: David Ross and Britain Express

Nearby accommodation is calculated 'as the crow flies' from Fairy Glen. 'Nearest' may involve a long drive up and down glens or, if you are near the coast, may include a ferry ride! Please check the property map to make sure the location is right for you.