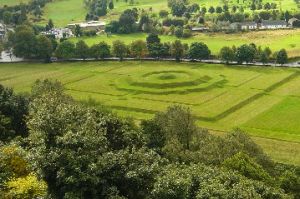 King's Knot
At the base of the castle rock at Stirling, next to a modern road, are a series of earthworks which show the outline of an early 17th-century formal garden. The garden may have been created in 1628 for King Charles I, hence the name 'King's Knot'. The garden is known locally as the 'cup and saucer'.

King's Knot is an octagonal garden made of stepped turf and a central grassy mound. It was originally planted with ornamental hedges and box trees, and reached by a canal which surrounded the garden area. At the centre of the garden is a raised mound about 22 feet across and 9 feet high.

It is this centre mound that draws the attention of historians, for it is thought to predate the rest of the Knot by several centuries, and it is linked to legends of King Arthur.

According to a late 15th-century text by William of Worcester, King Arthur's Round Table was at Stirling Castle, an assertion repeated in the 16th century by poet Sir David Lindsay.

The garden is rigidly formal in design, but there is a wide ditch running across the site at an angle. This ditch may possibly indicate the presence of a Roman road, or, more likely, the boundary of a medieval royal park. The garden had a limited lifetime and had fallen out of use by the end of the 18th century.

More self catering near King's Knot >>