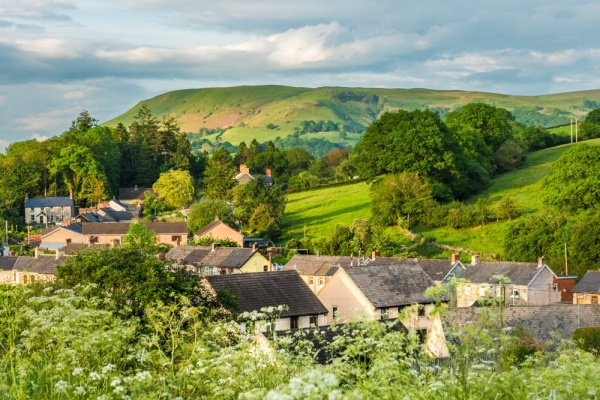 Builth Wells is a pretty town at the confluence of the Wye and Irthon rivers, in the old county of Brecknockshire. The first part of the name comes from the Welsh term for a cow pasture, or cattle range. An alternative translation is a wild ox pasture on a wooded hillside, which explains why the town symbol is a bull. The bull may be a reference to herds of white cattle thought to have thrived here in the Post-Roman period.

The 'Wells' part of the name was appended in the 1830s after mineral springs were developed at Glanne Wells and Park Wells to the west of the town.

The first record of mineral waters at Builth comes from 1740, but it was not until the development of Park Wells with its saline springs, and the Glanne Wells with its sulphur springs, that Builth gained a reputation as a spa town. 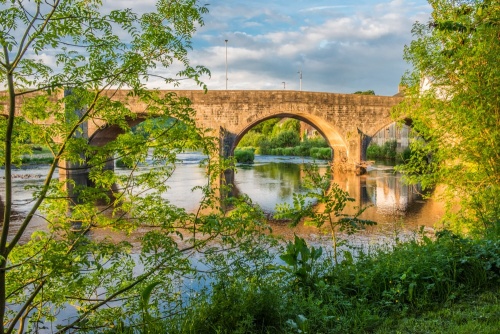 The history of Builth goes back to the immediate post-Roman period when the British ruler Vortigern is said to have owned land here. The first settlement was on the north side of the River Wye in Radnorshire, and it was not until the Norman invasion of Wales in the 11th and 12th centuries that the present town of Builth began to develop on the south side of the river.

The Welsh name of Builth is Llanfair ym Muallt, which translates as 'The church of St. Mary in Buallt', referring to the Norman church of St Mary. But it was not the church that prompted the development of Builth but a castle built by the Norman lord Philip de Braose around 1100.

De Braose erected a motte and bailey fortification on a high bluff on the south side of an important crossing of the River Wye. That timber castle was attacked and destroyed by Rhys ap Gruffudd in 1168. The rebuilt castle was captured in turn by English and Welsh forces. Then in 1277 Edward I of England rebuilt the castle in stone.

Just a few years later Llewelyn ap Gruffydd came to Builth Castle to ask for help in his rebellion against the English. He was rebuffed, and died shortly afterwards in a surprise attack at Cilmeri, just west of Builth.

The poignant tale of Llewelyn the Last is vividly portrayed in a huge mural on the side of a building at the south side of the bridge across the Wye, within sight of the earthen ramparts of Builth Castle. One part of the mural shows a blacksmith named Red Madoc who, according to legend, reversed the horseshoes on Llewelyn's mount to make it look as if he was riding in the opposite direction and thus confuse his pursuers.

The castle fell into decay and its stone was robbed for local buildings, but you can still see the impressive earthwork banks and ditches just behind the Lion Hotel on Broad Street. 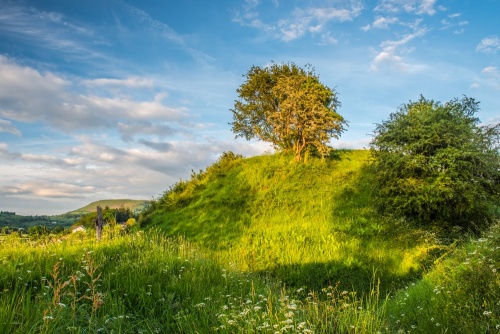 The town appears to have developed along two streets linking the castle and the church. The collection of Welsh tales known as the Mabinogion is thought to have been first written down in medieval Builth.

Traditionally the tales were thought to have been recorded by monks, which makes sense as monks were often the most literate members of society, but another version of events suggests they were written down by a local lawyer, who would also have been literate in an age when most people could neither read nor write.

Builth has always been closely linked to agriculture. According to the terms of a medieval royal charter, the citizens of Builth had the right to sell cattle and sheep on the streets every Market Day. When the local authority revealed plans recently to sell the town's cattle market for a new housing development the residents rebelled and threatened to resume selling cattle and sheep on the streets, which was their right according to the terms of the town's charter.

A disastrous fire swept through Builth Wells in 1690 and destroyed almost every building. The town was immediately rebuilt, probably with timbers from the decaying castle, but most of the late 17th-century buildings were replaced in the 19th-century when Builth enjoyed a brief period as a minor spa town after the mineral springs were discovered. Many of these Victorian buildings are listed for their historical interest.

One of the buildings that survived that period of spa architecture is the Old Hall on West Street. The Bell Inn on High Street is also 18th century, and it is thought that 13-15 High street is the only building to survive the 1690 fire. 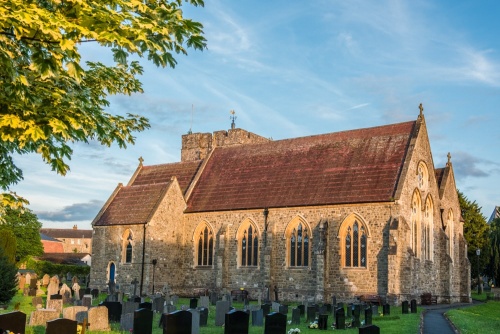 The coming of the railway brought visitors to enjoy the delights of a fashionable spa town in 1864. Though the mineral springs were actually outside Builth to the west, the townsfolk transformed a common grazing area on the south bank of the river into a pleasant space for recreation and for visitors to enjoy a refined area to relax. This became Groe Green, or The Groe, a public park that now takes in a broad swath of land running parallel to the river.

Fashions change, and by the early 20th century the flow of visitors coming to enjoy the life of a spa town dried up. Glanne Wells was torn down to make way for the town's golf course but Park Wells still exists, though no one comes to 'take the waters' any more.

The picturesque bridge linking Builth Wells on the south bank of the River Wye with Llanelwedd on the north bank was built in 1779 by architect James Parry of Hay-on-Wye to replace an earlier timber bridge. It was refaced in 1879 and strengthened in 1925. It is built of grey stone quarried locally and is composed of six broad arches. The best place to view the bridge is from The Groe, a public park on the south-west side of the river.

Within The Groe is a life-sized sculpture of a black bull, a reminder of Builth wells' origins. A short stroll from the bull sculpture is the war memorial, set behind an elegant iron railing. Further west along the park is an arrangement of standing stones. These are Gorsedd Stones, erected for druidic ceremonies that formed part of the 1993 National Eisteddfod, held here in Builth Wells. 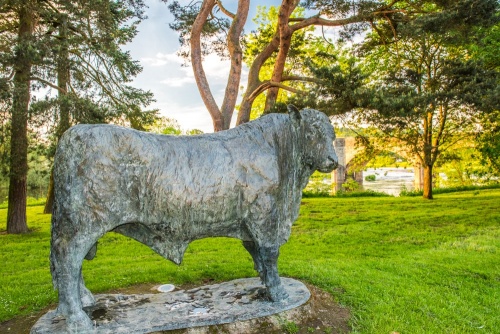 The Builth Bull sculpture in The Groe

A short distance from the Gorsedd Stones stands St Mary's Church, built in 1873 to replace the medieval parish church. The oval-shaped churchyard suggests that there was an even earlier Celtic church on this site. Most of the medieval furnishings were swept away in the Victorian restoration, but you can still see a memorial to John Lloyd of Towy (d 1585) who served as Squire of the Body to Elizabeth I. A more modern feature is an outstanding east window with glass by CE Kempe, the famous Victorian designer.

The Groe forms part of the Wye Valley Walk, a 136-mile walking trail following the Wye from its source in the Cambrian Mountains to the sea at Chepstow.

One of the most interesting historic buildings in Builth is Strand Hall, built in neoclassical style 1876 as a market hall by Oliver Bligh of Cilmary Park. The Hall looks very much like a nonconformist chapel in grand style, with an exterior of red and yellow bricks. A medallion in the porch depicts the Bligh coat of arms and the family motto ‘Finem Respice’, which translates as ‘Consider the end’.

The Blighs of Cilmary Park were connected to the Blighs of Cornwall whose most famous member was probably Captain William Bligh of Mutiny on the Bounty fame. Oliver's son Stanley Bligh built the memorial to Llywelyn ap Gruffudd on his own land at Cilmeri, near the spot where the prince is thought to have died. 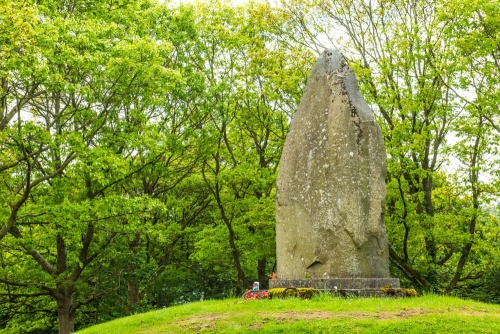 Llewelyn the Last memorial at Cilmeri

Builth Wells is a delight to explore. On Castle Street, at the foot of the Wye Bridge, stands the Wyeside Arts Centre, built as a market hall and Assembly Rooms during Builth's heyday as a spa town. Today the Arts Centre is a hub for the arts, with concerts, films, theatre and dance events.

Both pillar boxes are listed for their historic interest. They are just 2 of 43 listed buildings in Builth. Among the other listed buildings is The Old Hall, a late Georgian building once used as almshouses. On Castle Road is Bank House, another late Georgian building, and nearby is the Cosy Corner Tearoom, a late 18th-century building with an attractive timber-framed interior and large mullioned windows.

Builth makes a great centre for exploring Mid Wales, with easy links to Llandrindod Wells to the north and the Brecon Beacons to the south. 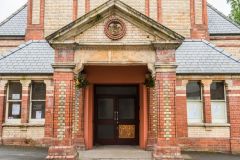 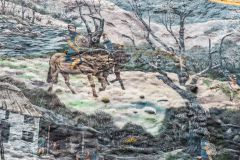 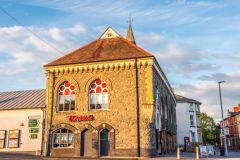 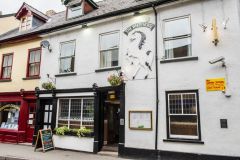 More self catering near Builth Wells

Self Catering near Builth Wells