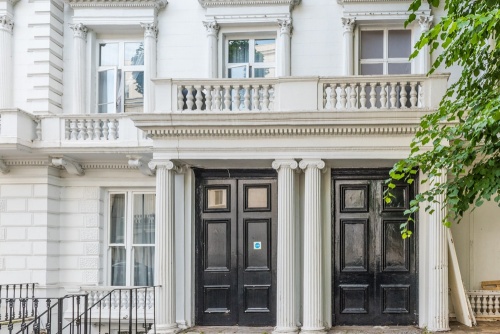 When the Metropolitan Line of London's underground network was built in the 1860s the route passed through the quiet, tree-lined streets of Bayswater, just north of Kensington Gardens.

One exception to the rule created one of London's most peculiar oddities, a pair of false-fronted houses on elegant Leinster Gardens in Bayswater. When the Metropolitan Line passed through Leinster Gardens, linking Paddington and Bayswater stations, numbers 23 and 24 were pulled down to allow room for construction. But rather than rebuild them, the railway company created a pair of false fronts; elegant facades that looked exactly like their five-storey neighbours but were, in fact, just 5 feet thick (1.5m). 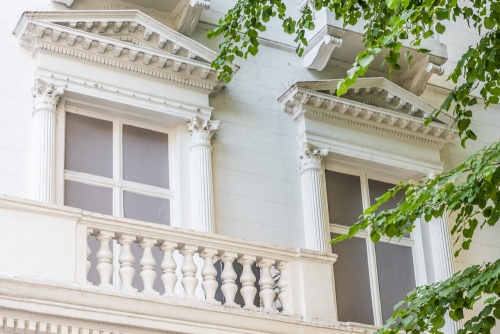 The answer lies in a very practical concern. Locomotives drawing the underground railway ran on steam created by burning coal. The locomotives were fitted with condensers to capture most of the smoke and condensation from the steam. They needed open-air sections of track to safely vent the built-up steam and smoke so that it would not contaminate the underground tunnels and make the air too foul to use.

One open-air section used to vent steam and smoke was at Leinster Gardens. Rather than letting residents see this unsightly process, the railway company erected house facades at 23-24 Leinster Garden. They planted trees and painted in the upper storey windows to make it seem as if the houses were real.

The only clue that you are looking at false frontage comes from the fact that the front doors have no letterboxes, and if you look closely you will see the painted windows are not sporting curtains like their neighbours. As disguises go, it is masterful. You simply wouldn't know that the houses you are passing by are anything other than ordinary residences. 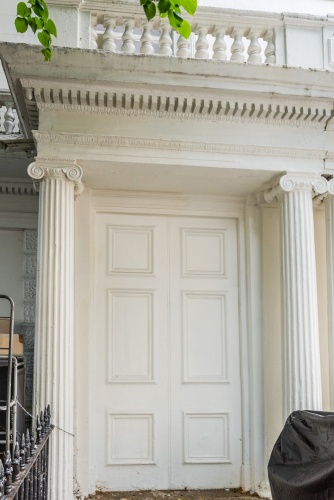 They have the same balustraded balconies, the same elegant neo-classical designs with Ionic and Corinthian columns, sash windows and detailed cornices as nearby houses along the terrace. Another minor giveaway is that neither of the houses has a visible house number. You have to infer the house numbers from the neighbouring properties.

The houses have been used for practical jokes ever since they were built, with gullible delivery drivers being sent to make deliveries to the non-existent properties. On one occasion in the 1930s fraudsters sold tickets to a charity ball at 10 guineas apiece. Members of high society showed up at the door in their elegant evening wear only to discover they'd been duped and there was no ball - nor a venue.

More recently, pizza delivery companies have been sent to the houses so many times that they know not to be taken in. Other pranks have included sending taxis to pick up non-existent fares.

23/24 Leinster Gardens gained a bit of cult status after the facade was used in the hit BBC TV series Sherlock, appearing in the 'His Last Vow' episode, when Mary Hudson's face was projected onto the false fronts.

Transport for London maintains the houses. 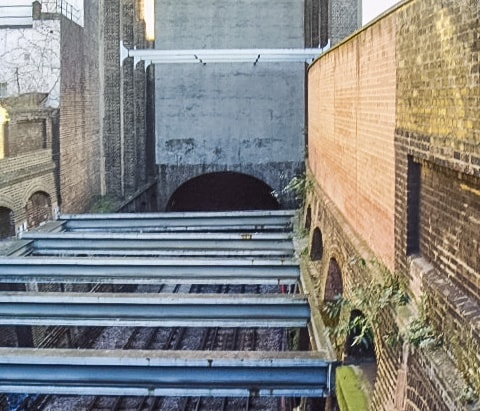 It should take less than five minutes easy walk from either Bayswater or Queensway tube stations.

Now, just to be confusing, the Henry VIII Hotel has a brass plate on the door saying number 23 and its official address is 23 Leinster Gardens. The hotel is very real and is NOT a false-fronted property.

More self catering near 23-24 Leinster Gardens